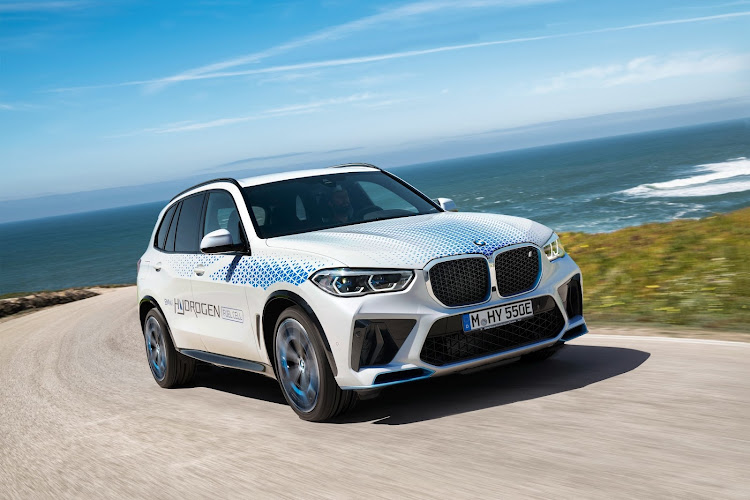 Filling up the tanks of the BMW iX5 Hydrogen only takes three to four minutes.
Image: Supplied

Battery power may be the frontrunner to become the car technology of the future, but don't rule out the underdog hydrogen.

That's the view of some major automakers, including BMW and Audi, which are developing hydrogen fuel-cell passenger vehicle prototypes alongside their fleets of battery cars as part of preparations to abandon fossil fuels.

They are hedging their bets, calculating that a change in political winds could shift the balance towards hydrogen in an industry shaped by early-mover Tesla's decision to take the battery-powered road to clean cars.

Global auto hub Germany is in sharp focus. It is already betting billions on hydrogen fuel in sectors like steel and chemicals to meet climate targets, and closely-fought elections this month could see the Greens enter the coalition government and further push the technology.

BMW is hydrogen's biggest proponent among Germany's carmakers, charting a path to a mass-market model around 2030. The company also has one eye on shifting hydrogen policies in Europe and in China, the world's largest car market.

The Munich-based premium player has developed a hydrogen prototype car based on its X5 SUV, in a project already partly funded by the German government.

Jürgen Guldner, the BMW vice president who heads up the hydrogen fuel-cell car programme, told Reuters the carmaker would build a test fleet of close to 100 cars in 2022.

"Whether this (technology) is driven by politics or demand, we will be ready with a product," he said, adding that his team is already working to develop the next generation vehicles.

"We're on the verge of getting there and we're really convinced we'll see a breakthrough in this decade," he said.

VW's premium Audi brand told Reuters it had assembled a team of more than 100 mechanics and engineers who were researching hydrogen fuel cells on behalf of the whole Volkswagen group, and had built a few prototype cars.

Hydrogen is viewed as a sure bet by the world's biggest truck makers, such as Daimler AG unit Daimler Truck, Volvo Trucks and Hyundai, because batteries are too heavy for long-distance commercial vehicles.

Yet fuel cell technology — where hydrogen passes through a catalyst, producing electricity — is for now too costly for mass-market consumer cars. Cells are complex and contain expensive materials, and although refuelling is quicker than battery recharging, infrastructure is more scarce.

The fact that hydrogen is so far behind in the race to the affordable market also means even some champions of the technology, like Germany's Greens, favour prioritising battery-powered passenger cars because they see them as the fastest way to reach their main goal of decarbonising transport.

The Greens do, however, back the use of hydrogen fuel for ships and planes and want to invest heavily in "green" hydrogen produced solely from renewable sources.

"Hydrogen will play a highly important role in the transport industry," said Stefan Gelbhaar, the party's transport policy spokesperson in the Bundestag.

Politics can be unpredictable though — diesel went from saint to sinner following Volkswagen's Dieselgate emissions-cheating scandal, which came to light in 2015. Some carmakers view hydrogen technology as an insurance policy as the EU targets an effective ban on fossil-fuel cars from 2035.

Last year Daimler said it would wind down production of the Mercedes-Benz GLC F-CELL, a hydrogen fuel-cell SUV, but a source familiar with company plans said the project could easily be revived if the European Commission or a German government with Green participation decide to promote hydrogen cars.

"We're focusing on (battery) electric first, but we're in close cooperation with our truck guys," said Jörg Burzer, Daimler's head of production, when asked about that approach.

"The technology is always available."

For years Japanese carmakers Toyota, Nissan and Honda, and South Korea's Hyundai, were alone in developing and pushing hydrogen fuel-cell cars, but now they have company.

The EU wants to build more hydrogen fuelling stations for commercial vehicles. Fitch Solutions auto analyst Joshua Cobb said the bloc was only likely to start pushing hydrogen passengers cars in two to three years' time, given it was still figuring out how to pay for its battery-electric car push and how to obtain enough "green" hydrogen from renewable sources.

But he added: "It's not out of bounds to think if the (German) Greens come into power they could accelerate the push to adopt regulations favouring hydrogen fuel-cell cars."

BMW's Guldner acknowledged hydrogen technology was too expensive to be viable for the consumer market today, but said costs would come down as trucking companies invested in the technology to bring fuel-cell vehicles to market at scale.

To demonstrate BMW's hydrogen-powered iX5 prototype, Guldner took Reuters for a spin at 180km/h on the autobahn near the carmaker's Munich headquarters and in a few minutes gave it enough fuel to run 500km using a hydrogen gas pump at a Total petrol station.

Guldner said BMW saw hydrogen fuel-cell cars as "complementary" to its future battery electric model range, providing an alternative for customers who cannot charge at home, want to travel far and refuel swiftly. The motor in the iX5 Hydrogen is the same as BMW's all-electric iX.

"When the future is zero emissions, we believe having two answers is better than one," he added.

A long and winding road

Yet Fitch Solutions' Cobb said it would still take years before any European policy support for hydrogen-powered cars translated into significant sales.

Indeed, auto consultancy LMC forecasts that different uses of hydrogen — in commercial vehicles, aviation and energy storage — would spur its adoption in passenger cars, but over the longer term.

"We're just not going to get there any time soon," said LMC senior powertrain analyst Sam Adham. LMC estimates in 2030 hydrogen fuel-cell models will make up just 0.1% of sales in Europe, and sales will only take off after 2035.

There remain divisions about the technology's prospects in the global car industry, and even within auto groups.

VW's Audi unit might be researching fuel cells, for example, but Volkswagen group CEO Herbert Diess has been scathing about hydrogen-powered cars.

"The hydrogen car has proven NOT to be the solution to climate change," he said in a tweet this year. "Sham debates are a waste of time."

Stephan Herbst, general manager of Toyota in Europe, has a different view.

Speaking in his role as a member of the Hydrogen Council business group, which forecasts that hydrogen will power more than 400 million cars by 2050, Herbst said he was confident that now governments had set ambitious carbon-reduction targets, they would push hydrogen alongside battery electric cars.

"We strongly believe this is not a question of either or. We need both technologies."

Hundreds of workers at a Ford Motor Co factory in India's western Gujarat state protested outside the plant on Tuesday, demanding that the factory's ...
Motoring
10 months ago

US battery maker QuantumScape Corp said on Tuesday it had partnered with an undisclosed large automaker to evaluate prototypes of its solid-state ...
Motoring
10 months ago

US auto safety investigators said on Tuesday they have opened a probe into 30-million vehicles built by nearly two dozen automakers with potentially ...
Motoring
10 months ago