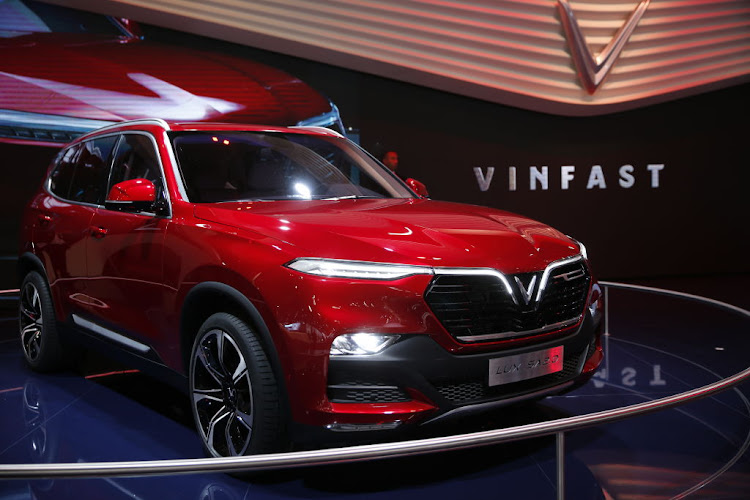 A Vinfast LUX SA 2.0 SUV automobile is on display during the second press day of the Paris Motor Show at the Parc des Expositions at the Porte de Versailles on October 3, 2018 in Paris, France.
Image: Chesnot/Getty Images

Vietnamese carmaker VinFast could add other markets in 2023 to expand its European strategy beyond a planned debut in Germany, France and the Netherlands next year.

The company, a unit of Vingroup JSC Vietnam's largest conglomerate which some have called “Vietnam's answer to Tesla”, will debut in Europe next year with two battery electric SUVs models, the midsized VF e35 and the seven-seater VF e36, both designed by Italy's Pininfarina.

The two models launch in Vietnam, North America and Europe around mid-2022, after an unveiling planned later this year.

VinFast became Vietnam's first fully-fledged domestic car manufacturer when its first petrol-powered models built under its own badge hit the streets in 2019.

VinFast's B2B sales vice-president Emiel Hendriksen said on Thursday it was also looking at Italy, Scandinavia, Switzerland and Austria for a second step in its European strategy.

“We're considering those countries for 2023,” he said during a presentation at Pininfarina headquarters in Turin.

VinFast will initially rely on a direct distribution model in Germany, France and the Netherlands, based on property showrooms, but could later consider an agency-model for sales in other countries, Hendriksen said.

The company sold about 30,000 vehicles domestically last year and had set a target of selling 15,000 electric vehicles in 2022, though its representatives did not provide detailed forecasts for the European market on Thursday.

Earlier this year sources said parent Vingroup JSC was considering an US initial public offering (IPO) of its car unit that could value VinFast at about $60bn (about R893.4bn), though an initial second-quarter deadline for the deal mentioned by one of the sources was delayed.

VinFast Europe CEO Bich Tran said any IPO decision was up to the company's headquarters in Vietnam.

“Our European plans are independent from any IPO. We're carrying on with our plans, everything in Europe is moving as planned,” she said.

Global automakers could lose $210bn (roughly R3.1-trillion) in revenue this year because of supply chain disruptions, nearly double a forecast ...
Motoring
1 month ago

Why are US auto safety regulators opening a new investigation into Takata air bag inflators installed in millions of vehicles built over the past 20 ...
Motoring
1 month ago