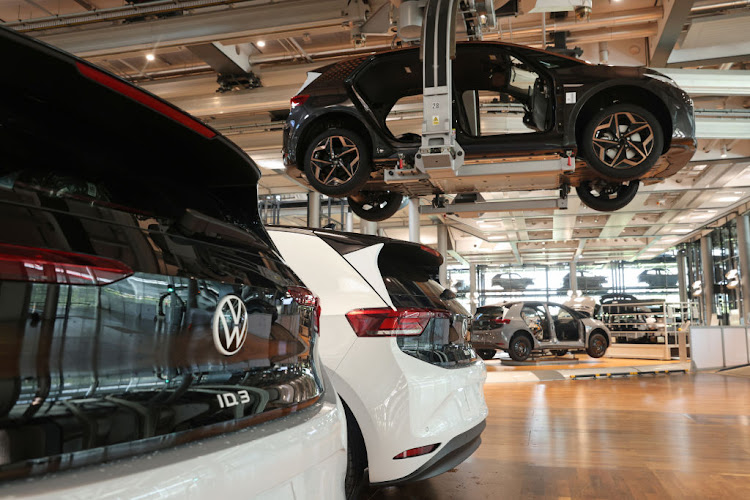 A ceiling conveyor carries a Volkswagen ID.3 electric car past others on the floor on the assembly line at the "Gläserne Manufaktur" ("Glass Manufactory") production facility in Dresden, Germany. The Dresden plant is currently churning out 35 ID.3 cars per day. The ID.3 and ID.4 cars are also produced at VW's Zwickau plat located in the same region.
Image: Sean Gallup/Getty Images

The shift to electric vehicles will force huge changes in the auto industry and require EU backing for “reskilling” programmes to help workers prepare for a zero-emission future, according to a report published on Tuesday.

The Platform for Electromobility, an industry group, said a report by the Boston Consulting Group showed by 2030 European auto industry employment will drop by less than 1% from 5.7-million people today amid the transition to electric vehicles.

But jobs at manufacturers and traditional suppliers focused on combustion engines will drop 20% and 42% respectively — between them shedding a cumulative 500,000 positions. At the same time, employment at suppliers focused on zero-emission technology will rise by 300,000 workers, representing a 10% increase, the study said.

The European Commission has proposed an effective ban on new petrol and diesel cars from 2035.

Automakers have warned that jobs at conventional combustion engine plants will be particularly at risk and have called on the EU to help mitigate the affect the shift to electric will have on those manufacturing workers.

The group said the EU, governments and companies should focus on investing in education, training, “upskilling” and “reskilling” of workers to “ensure no-one is left behind” as the industry makes the transition to electric vehicles.

“The auto industry is so strategic for Europe across the board involving an awful lot of people that reside everywhere, so it's important that the EU work with member states on accompanying policy,” Platform for Electromobility chair Arne Richters told Reuters. “Reskilling and making that a strategic priority is a crucial point.”

The group represents a number of organisations and corporations including carmakers Tesla Inc, Renault and Nissan, charging company ChargePoint, and US conglomerate 3M.

Polestar to go public at $20bn valuation via SPAC

Swedish electric-car maker Polestar said on Monday it will go public by merging with a blank-check firm backed by billionaire Alec Gores and ...
Motoring
8 months ago

The 2021 South African Car of the Year (Coty) trophy was on Monday awarded to the striking Peugeot 2008 that launched locally earlier this year with ...
Motoring
8 months ago

Tesla Inc CEO Elon Musk said on Friday that thanks to new semiconductor plants that are planned or under construction, the global chip shortage that ...
Motoring
8 months ago