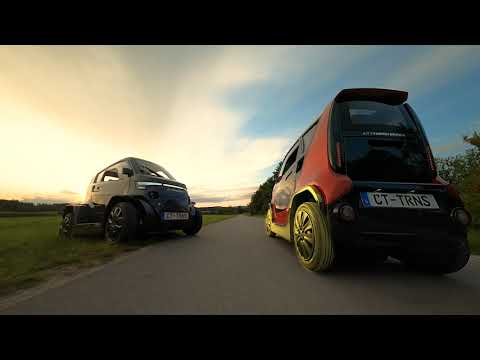 Have you ever wished your car could shrink to fit into a tight parking space?

The City Transformer CT1 does just that, with a foldable chassis that allows the two-seater to change its width while driving to avoid traffic and parking problems. Essentially this shape-shifting car is able to “suck in its stomach” and take up not much more parking space than a motorcycle.

While driving, the wheels are set at a 1.4m width to increase dynamic stability, but at the press of a button Active Width Adjustment technology moves the wheels inward to make the car only 1m wide - a lot skinnier than the 1.6m Smart ForTwo - and  easier to park.

Israeli company City Transformer says the car is ideal for short, urban trips for one to two people, and that four of its vehicles can fit in the space of one EU standard parking space.

The electrically-powered car has a 90km/h top speed when unfolded and 40km/h when folded. The range is 180km and the batteries can be fast-charged to 80% of that within 30 minutes.

Image: Supplied The City Transformer with its wheels narrowed for parking (left) and widened for driving (right).

“The City Transformer is designed to offer city dwellers a viable alternative to ‘real’ cars, which results in reduced traffic and increases inner-city safety and quality of life,” says a City Transformer spokesperson.

The company says its car could be a potential solution for many of the 4.2-billion people who live in cities, where urban traffic and the associated parking struggle is a daily dilemma. On average, drivers in New York and Paris search 230 hours a year for parking, while drivers in London take as much as 270 hours a year.

“Conventional cars are inefficient in urban areas: the available seats are hardly used, the available speeds are not needed (the average speed in the city is 17km/h) and each car is driven only 5% of its entire lifetime,” said the spokesperson.