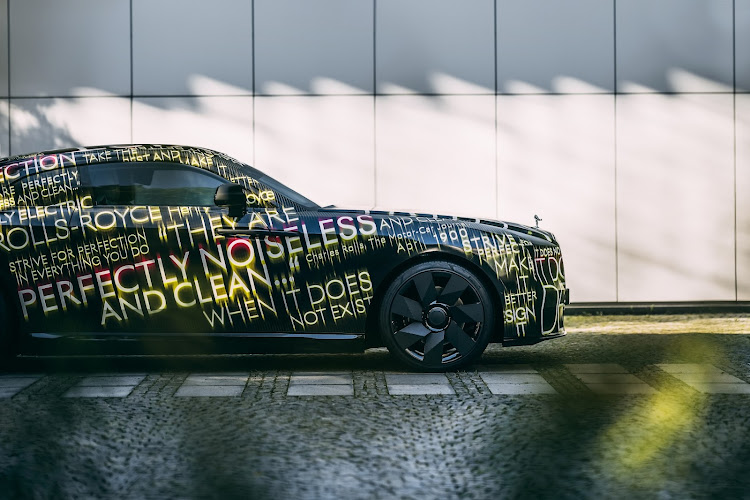 The first all-electric Rolls-Royce – the Spectre – will come to market in the fourth quarter of 2023.
Image: Supplied

In nine years, Rolls-Royce will stop selling vehicles that run on fossil fuels, CEO Torsten Müller-Ötvös said in a September 29 announcement. The first of the company’s planned all-electric portfolio, the Spectre sedan, will arrive by the fourth quarter of 2023.

“With this new product, we set out our credentials for the full electrification of our entire product portfolio by 2030,” Müller-Ötvös said. “By then, Rolls-Royce will no longer be in the business of producing or selling any internal combustion engine products.”

Müller-Ötvös described the news as the most important decision in the history of the brand since Charles Rolls and Henry Royce agreed they would build cars together on May 4 1904.

Since its inception, Rolls-Royce has been the vanguard of powerful V12 engine technology and quiet, smooth excellence for the world’s wealthiest and most discerning customers. Many of its most iconic models, from the early Rolls-Royce Phantoms to the modern Cullinan, employed the company’s famous 12-cylinder combustion engine technology. As recently as 2019, Müller-Ötvös was saying he’d keep the V12 around “as long as possible.”

While the Spectre will be the first fully formed production electric car from Rolls-Royce, the brand had previously experimented with a fully operational all-electric Phantom called the 102EX in 2011; an electric 103EX prototype followed in 2016. Rolls-Royce now offers no hybrid vehicles among its fleet that includes the Phantom sedan, Cullinan SUV, Ghost sedan, Wraith coupe, and Dawn convertible.

But Royce noted that the electric car would not become prevalent until a charging network could be established. Many would argue that time still has not arrived, since BMW’s vehicles charge on EVgo’s network of just 800 fast-chargers nationwide. (Presumably the Rolls-Royce Spectre would charge at a well-appointed home set-up rather than resorting to the indignity of charging in public with the masses.)

Further details of the Spectre remain scarce, including pricing. While early rumours say the new vehicle might share motors with BMW’s i7, a spokesperson declined to discuss the drivetrain for the upcoming vehicle.

Rolls-Royce’s news works to keep up with parent company BMW AG as much as anything else. BMW had recently introduced its first-ever all-electric SUV, the BMW iX, which will start deliveries in March 2022. It will soon begin delivering its all-electric i4 sedan as well. Earlier this month, the car manufacturer upped its battery cell orders to $24bn to keep pace with surging demand for electric cars. During the first half of 2021, EVs comprised 11% of deliveries across the group.

Meanwhile, cross-country rival Bentley has announced it will bring forth a fully electric vehicle by 2025. Bentley has been selling hybrid vehicles for years.

Spectre will be built on the aluminium spaceframe architecture now found in the $455,000 Rolls-Royce Phantom sedan and designed to underpin all forthcoming Rolls-Royce motor cars. The company says it is undergoing 2.5-million kilometres of testing by company engineers to ensure its indestructibility — a simulation which approximates “400 years of use” and a veritable Easter-egg hunt for lovers of Goodwood’s pride, since the cars will be tested in “plain sight” on public roads by Rolls-Royce employees, Müller-Ötvös said.

Where EV technology has neutered other cars from other brands — rendering them more like transportation appliances than driving machines — Rolls-Royces, which are known for their quiet, smooth rides, will naturally excel under battery power, he continued. “This is not a prototype, it’s the real thing.”

Mahindra & Mahindra Ltd is weighing options to raise funds for its Automobili Pininfarina unit as it seeks to bring a delayed $2.2m electric hypercar ...
Motoring
7 months ago

Lucid Group Inc said on Tuesday it will start delivering its luxury electric sedans with a Tesla-beating driving range in late October, in a major ...
Motoring
7 months ago