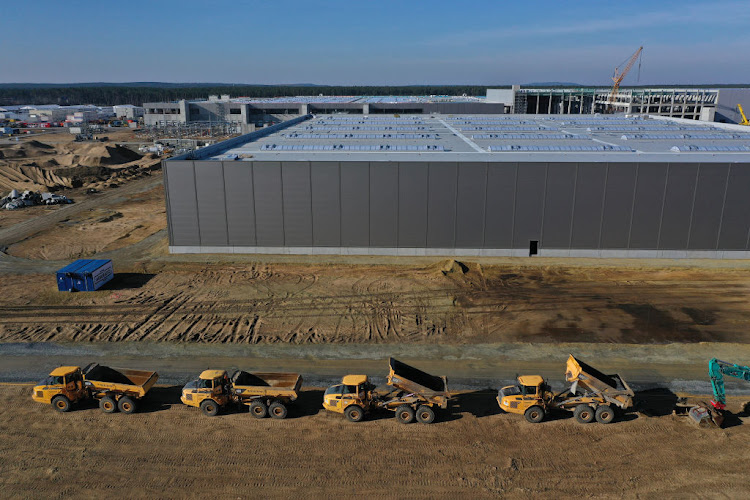 An aerial view of the construction site of the Tesla Gigafactory Berlin-Brandenburg near Gruenheide, Germany.
Image: Sean Gallup/Getty Images

With final approval for its German factory potentially just weeks away, Tesla's Elon Musk will make an appearance in the tiny town of Gruenheide this Saturday to host a county fair.

Despite pandemic-related curbs limiting gatherings in Germany to under 5,000 people, Tesla applied for — and got — a permit to have 9,000 at the October 9 'Giga-Fest', after local authorities agreed the event would be Covid-19 safe.

Coming on the heels of officials allowing the company to break ground on its new site before final approval had even been granted, environmental groups say this is just the latest example of Tesla being given too much leeway to act disruptively in Germany — a pattern they worry will continue.

Tesla did not respond to a request for comment.

The pre-approvals Musk has received from local authorities to build without final permission are legal, but rarely used by German firms because of the associated risk: if final approval is not granted, Tesla must pay to tear everything down.

While some bemoan Musk's approach as throwing German caution to the wind, others - who say German regulations governing planning, jobs and environmental concerns are unnecessarily restrictive - welcome the influence he could have on the country's business culture.

“I am fully convinced Tesla can have a positive effect on Germany,” Brandenburg's economy minister Joerg Steinbach, a prominent advocate of the factory, told Reuters.

“The fundamental idea of taking a close look at current legislation and checking whether it could perhaps be modernised - without risking a loss to legal clout - is in my opinion absolutely worth considering.”

The country's powerful unions are already gearing up to fight for German-style contracts for Tesla workers, environmental groups are poised to oppose any further expansion plans, and locals wary of Musk's 'American' ways are watching the firm's every move.

“Tesla has to stick to environmental protection laws, building laws, and of course labour and unionisation laws,” Birgit Dietze, head of the Brandenburg region for union IG Metall and a former member of Volkswagen's supervisory board, said.

Musk has made his irritation for German laws and processes known, saying in a letter to authorities in April that the country's complex planning requirements were at odds with the urgency needed to fight climate change.

Once running, the factory will produce 500,000 electric cars a year and generate 50 gigawatt hours (GWh) of battery capacity — more than any other plant in the country.

Conversations between the union and applicants indicate Tesla, whose CEO is known for his rocky relationship with organised labour, is offering pay 20% below the collectively bargained wages offered at other German automakers, IG Metall said.

It is also shaking up conventional German contracts by offering packages with stock options and bonuses rather than predetermined holiday pay.

Driving a harder bargain with its workforce could create a competitive advantage for Tesla, whose choice to set up its first European gigafactory in the homeland of Volkswagen, Daimler and BMW has raised the stakes in the global battle for EV dominance.

After the firm offered one-off bonuses and stock options instead, unions dropped a threat to strike. Unions say stock options have also been mooted at the Brandenburg factory.

German carmakers can't do it — but Tesla can

Tesla did not respond to a request for comment or questions on how recruitment was progressing. But data from LinkedIn suggest applications are low, with fewer than 10 applicants for most of the factory positions advertised in the past month.

Gruenheide is a 45-minute drive from the Polish border, and Tesla is widely expected to recruit workers from there.

“German automakers couldn't do it; they'd get into big trouble with the unions. But Tesla can do it.”

Musk had planned on starting production in July in order to deliver the Model Y car to European customers from Berlin - but local opposition and the late addition of a battery plant requiring blueprints to be resubmitted to authorities held up the process.

In a document published online in late September containing all 813 objections to the factory filed with local authorities and Tesla's responses, the company repeatedly reminded its critics that it was creating jobs and bringing Germany closer to its electric mobility goals.

“I understand the concerns. But some of it is selfish. It’s always the same — people want things like wind farms and electric vehicles ... just not in their backyard,” said 60-year-old Grunheide local Ralf-Thomas Petersohn, a member of Germany's official Tesla fan club.

A public hearing scheduled for September 23 for citizens to discuss objections to the factory was moved online due to concerns that it could become a “super-spreader event”, authorities said, a decision which some viewed as hypocritical considering the likely approval of Tesla's request for a 9,000-person party.

“This isn't about Tesla. It's about whether you take citizen participation seriously,” Michael Ganschow of environmental organisation Gruene Liga said. “We can't just say, 'You're making electric cars, so you can do whatever you want'.”

Tesla has weathered the chip crisis better than its rivals, with its overall deliveries surging 20% in July to September.
Motoring
1 week ago

With the uptake of electric vehicles (EVs) fast increasing in leading markets across the world, it’s worth exploring how South Africans feel about ...
Motoring
1 week ago

Are the days numbered for the long-serving rubber wipers?
Motoring
1 week ago