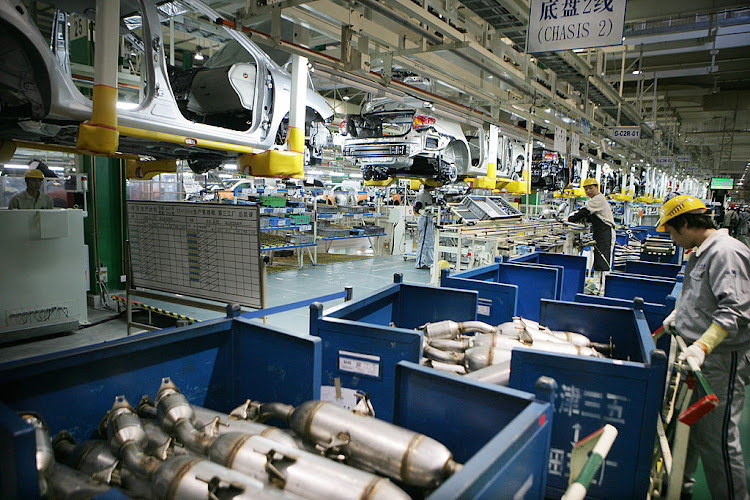 Toyota is apparently looking to restart production curtailed by component shortages with a rebound in shipments from pandemic-hit suppliers.
Image: Thomas Engstrom/Bloomberg via Getty Images

Toyota Motor Corp in December wants to restart production curtailed by component shortages with a rebound in shipments from pandemic-hit suppliers that may help it claw back around a third of output lost to supply disruptions, three sources familiar with the carmaker's plans said.

Toyota last month cut its production target for the financial year to end-March by 300,000 vehicles to 9-million units because rising Covid-19 infections slowed work at parts factories in Malaysia and Vietnam, compounding a global chip shortage that has forced it and other big automakers to curtail output.

The Japanese carmaker has asked suppliers to make up for lost production so it can build an additional 97,000 vehicles between December and the end of March, with some considering additional weekend shifts to do so, said the sources, who asked not to be identified because they are not authorised to talk to the media.

“Nothing has yet been decided about production plans beyond November,” a Toyota spokesperson said.

“Covid-19 infection rates in Southeast Asia are dropping dramatically and people's concerns about production risk are easing,” said Takashi Miyao, a researcher at automotive industry consultant Carnorama. “It looks like the industry is emerging from a tunnel,” he added.

Toyota, which had hardened its supply chain against disruptions after the 2011 earthquake that devastated Japan's northeast coast, was the last of the major automakers to revise down production plans because of parts shortages. The pandemic forced component factories to close while also driving up demand for semiconductors that carmakers needed as people forced to stay home bought tablets and other electronic devices.

With too few parts, automakers have been unable to take advantage of a rebound in demand for cars in key markets such as China. Vehicle sales there in September dipped by a fifth from a year earlier.

Daniel Craig may be saying goodbye as James Bond, but his iconic Aston Martin is about to be given a new lease of life for an ultra-cool $1m (roughly ...
Motoring
3 months ago

Mercedes-Benz, the German company founded by the inventors of the motor car, is pouring more resources into its cutting-edge research and design ...
Motoring
3 months ago

The impact from a global semiconductor shortage on Stellantis' Italian car production this year will be worse and longer-lasting than the damage to ...
Motoring
3 months ago