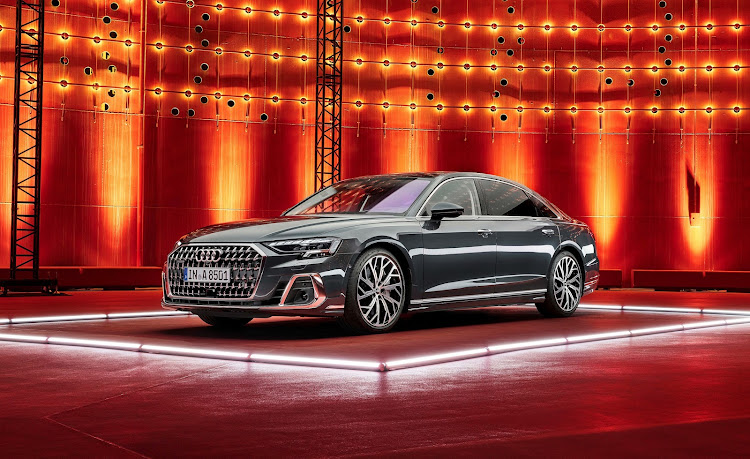 Audi has reworked its flagship A8 limousine with a wider frame-grille, more chrome pasted on surfaces and numerous other enhancements. Here are 10 points to highlight on the new model.

It's still a big rig

The new car is just 1cm longer than the car it replaces. Size remains virtually unchanged then with a wheelbase of three metres, length of 5.19m and width of 1.95m and height of 1.47m. The body is made up of 58% aluminium parts.

And then there was light

Audi likes to have intelligent fun with its lights and the new A8 gets Digital Matrix LED headlights with digital micromirror device technology. This means that each headlight has about 1.3-million micromirrors that break down the light into tiny pixels allowing for better precision distribution.

Highlights include the ability for the A8 headlights to emit a carpet of light that illuminates the driver’s own lane particularly brightly while the digital organic light-emitting diode OLEDs at the rear are able to display different patterns such as when the “dynamic” Audi drive select mode is chosen, the lights change to a wider signature that is only available in that mode.

Smartphone integration at the back

Smartphone mirroring moves to the back where a pair of 10.1-inch displays with full HD resolution attached to the backs of the front seats display content from passengers’ mobile devices and can receive numerous audio and video streams via casting.

It can do solo parking

There are about 40 driver assistance systems available in the enhanced Audi A8. These include Audi pre-sense safety systems, night vision assistant and surround-view cameras, and remote park assist plus, which can automatically manoeuvre the large sedan into and out of a parallel or bay parking space. The driver does not even need to be in the car for it to do that.

All of the new Audi A8 get quattro all-wheel drive and mild hybrid technology (MHEV) as a standard feature, the latter which uses the 48-volt main electrical system. They are available with a 3.0 TFSi V6 engine with 210kW (China only) and 250kW and 500Nm.  The 4.0l V8 TFSI for the A8 60 has 338kW and 660Nm powers  while the same motor wields 420kW and 800Nm for the S8 models. A highlight of the V8 is the cylinder on demand system (COD), which temporarily deactivates four cylinders for moderate driving. The A8 is also available with a TDI engine and a plug-in hybrid model will  follow soon.

Only the S82 gets the extraordinary predictive active suspension that acts in conjunction with the front camera to spot uneven surfaces, and lifts the rear when negotiating speed humps. The top model also benefits from a sport differential, and dynamic all-wheel steering.

The short of it is that only the large markets of China, the US, Canada, and South Korea will again have exclusive access to the long wheel base A8L.

For the first time in the A8 there's an S line exterior package and additionally a black appearance package which swathes badges and names with black. The colour options for the A8 include eleven colors, among them the new metallic District Green, Firmament Blue, Manhattan Gray, and Ultra Blue, five matt finishes — Daytona Gray, Floret Silver, District Green, Terra Gray, and Glacier White. In the Audi exclusive programme, the car is painted in the customer’s chosen colour.

Ouch, the Horch is only for China

The Audi A8 L Horch tips a hat to August Horch, the German engineer who founded the company which would eventually become Audi. It's the ultra-luxurious top echelon of the range and at 5.45m long it's 13cm longer than regular A8 L models.

It benefits from bespoke equipment like expanded diamond quilting, logo embossing in the cushions, deep-pile floor mats and specifically designed Singleframe with vertical braces and a Horch emblem on the C-pillar and “H crown” rim design to indicate its individuality. A two-colour finish is also optional for customers in China. Three colour combinations, applied by hand, are available: Mythos Black and Florett Silver, Florett Silver and Mythos Black, and Firmament Blue and Ultra Blue. 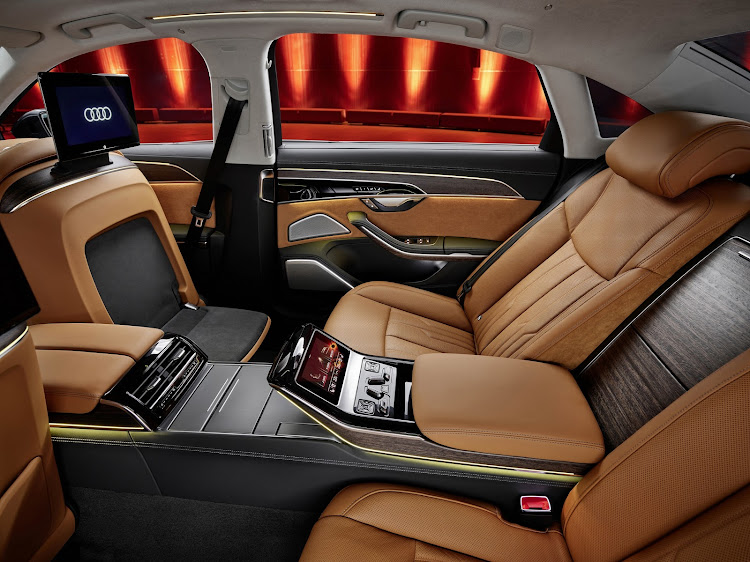 The extended rear living quarters of the A8L have been modified for better comfort.
Image: Supplied

In the same vein that the AMG and M Performance-tuned S-Classes and BMW 7 Series are the respective sporting pinnacles of their luxurious ranges, the ...
Motoring
2 months ago

Mercedes-Benz last week announced it will be offering Dolby Atmos, the premium noise-cancellation and sound-enhancing system, in some of its top-tier ...
Motoring
1 month ago

The LS nameplate is where it all started for Japanese premium brand Lexus. It went on to cement the reputation of the brand as one worthy of mention ...
Motoring
3 months ago