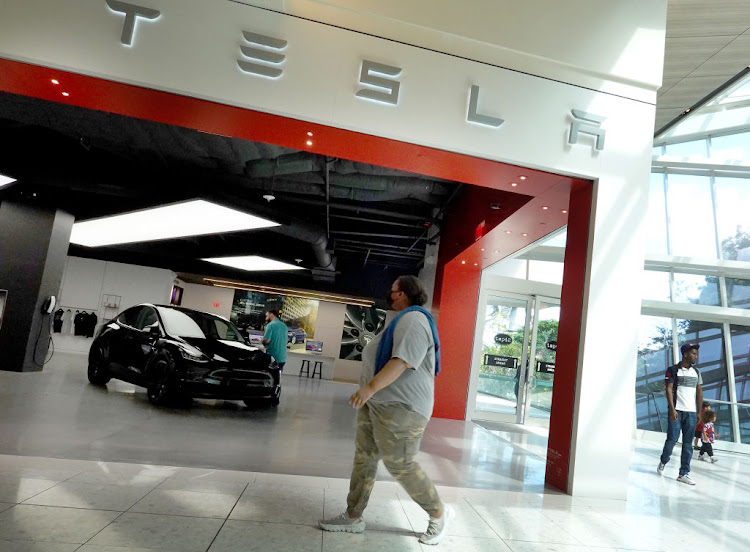 Tesla's shares climbed 3.6% on Thursday to $1,106.48, recouping some of the heavy losses suffered earlier in the week, during the period when Elon Musk had sold $5bn worth of stock.
Image: Joe Raedle/Getty Images

Tesla shares rose in US premarket trading on Thursday, even after overnight filings showed CEO Elon Musk had sold about $5bn (roughly R76.58bn) of the stock in recent days.

The electric-car maker's shares climbed 3.6% to $1,106.48, recouping some of the heavy losses suffered earlier in the week, during the period when Musk had sold. Its Frankfurt-listed shares rose 4.7% and were the second most actively traded issue on German trading platform Lang & Schwarz.

Musk's share sale was his first since 2016 and followed his weekend poll of Twitter users about offloading 10% of his Tesla stake, which comprises most of his estimated $281bn (R4.3-trillion)  fortune.

Investors downplayed the significance of Musk's trading for the stock's outlook, pointing instead to strong car orders and Musk's professed faith in the company, though brokers said it could be a bumpy day in US trade.

"The reason we're seeing stock rebound is because there does seem to be method in his madness," AJ Bell analyst Danni Hewson said.

Should Elon Musk decide to unload some of his stake in Tesla Inc, he will be capitalising on a massive rally that has made the electric-vehicle maker ...
Motoring
2 weeks ago

"It's about making sure that the market understands this isn't something done on a whim, or because his Twitter followers told him he should. He's had his decision already made, rubber stamped."

Filings showed Musk's trust sold nearly 3.6-million shares in Tesla, worth around $4bn (R61.26bn), while he also sold another 934,000 shares for $1.1bn (R16.85bn) to cover tax obligations after exercising options to acquire nearly 2.2-million shares. The sale equates to about 3% of Musk's total holdings.

The options-related part of the sale was put in place in September, much before his weekend Twitter poll.

"All I really see this doing is providing some short-term volatility and medium term keeping Tesla shares' valuation multiples sky high as long as Elon remains in the spotlight and investors continue to see him as an 'exceptional visionary'," said Tariq Dennison, MD at GFM Asset Management in Hong Kong, who is net short on Tesla stock.

Tesla did not respond to a request for comment.

While Tesla has lost more in market value than the entire market capitalisation of Ford Motor Co this week, retail investors have been net buyers, making net purchases of $157m (R2.40bn) on Monday and Tuesday, according to Vanda Research.

Confirmation of Musk as a seller, however, and the prospect of more sales to come might weigh on the price in the near-term.

"Some people will be tightening stops or looking to close out. Though [Musk] will want to protect the stock to some extent and won't want people running for the door."

The company's share price has made staggering gains over recent years and has epitomised the ebullient mood in US markets and the optimism of small-time traders who have helped drive it up 51% this year and 1,300% from 2020 lows.

Shares of Rivian Automotive Inc surged as much as 53% in its Nasdaq debut on Wednesday, giving the Amazon-backed electric vehicle maker a market ...
Motoring
2 weeks ago

Porsche AG, part of the Volkswagen Group, profits from being part of Volkswagen, its CEO Oliver Blume said on Wednesday, after speculation that an ...
Motoring
2 weeks ago

Pepsico Inc will get its first set of Tesla Inc electric trucks in the fourth quarter, the packaged food maker's top boss Ramon Laguarta said in an ...
Motoring
2 weeks ago