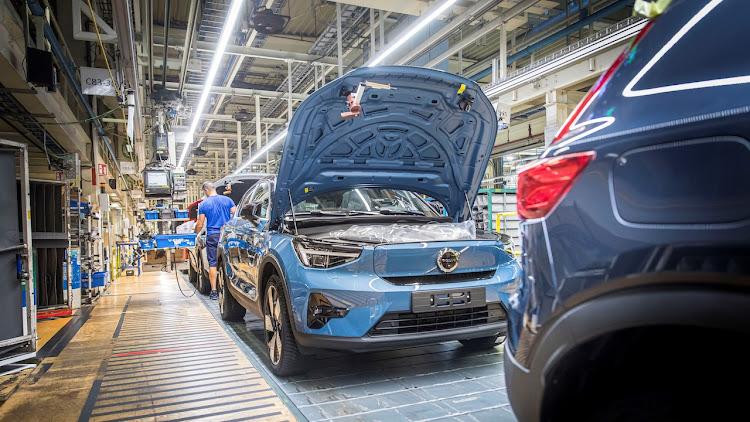 A Volvo C40 Recharge being assembled at the firm's production facility in Ghent, Belgium. Volvo Cars is considering building a third plant in Europe to boost its production capacity beyond 1.2 million vehicles per year.
Image: Volvo

Volvo Cars is considering building a third plant in Europe to boost its production capacity beyond 1.2 million vehicles per year, a company spokesperson said on Sunday.

German autos publication Automobilwoche reported earlier on Sunday the company was planning to build another European plant by the middle of the decade to meet its production target of 1.2 million vehicles a year, quoting Volvo Cars CFO Bjorn Annwall.

A company spokesperson said by email to Reuters the company was already able to produce 1.2 million vehicles annually at its six existing factories and wanted to increase its capacity beyond this amount, but no plans had been finalised yet.

"At this stage no decision has been made. However, Volvo Cars has grown rapidly over the past decade and aims to continue to grow at a similar pace going forward," the spokesperson said.

The Gothenburg-based company, which became Sweden's second largest listing after its IPO in late October with a valuation of $18bn (roughly R275,803,560,000), produces around 800,000 cars a year at its two factories in Sweden and Belgium.

"We need both our plants in Europe but we need more. That's why we want to build a third plant," Annwall said to Automobilwoche.

Where that plant will be located is not yet clear, he said.

Toyota Motor Corp said on Saturday it will partner with four other Japanese vehicle makers to explore the viability of alternative green fuels for ...
Motoring
3 weeks ago

Large parts of the world are not ready for zero-emission vehicles, which is why Toyota Motor Corp did not sign a pledge this week to phase out ...
Motoring
3 weeks ago

Tesla Inc boss Elon Musk said on Thursday high production and breakeven cash flow would be the "true test" for Rivian Automotive Inc, a day after the ...
Motoring
3 weeks ago