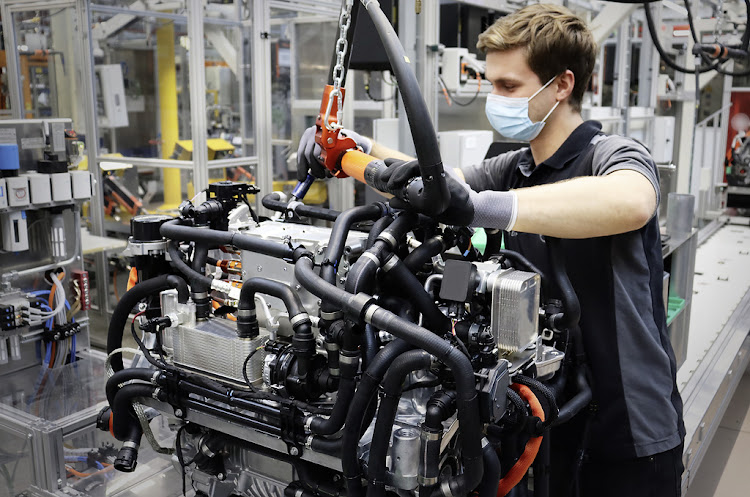 Berlin plant workers who assemble the soon to be defunct six-cylinder diesel engines have been offered retraining in software and coding.
Image: Supplied

Daimler will produce the first in-house electric motor at its oldest plant in Berlin, the carmaker said on Thursday, providing relief to workers worried that the diesel motor production site is on the brink of deep job cuts.

Workers who feared for their positions after Daimler said in September 2020 its Berlin plant would end production of the six-cylinder diesel motor within a year would also be offered retraining in software and coding, the German company said.

The motor, known as an axial-flux motor and designed by British startup YASA, which Daimler acquired earlier this year, weighs a fraction of its diesel equivalent and can boost the range of an EV by up to 7%, YASA's founder Tim Woolmer told Reuters in July.

Woolmer said at the time that Daimler had briefed YASA to bring costs down in future iterations of its motor so the carmaker could use them across its entire EV range.

The e-motor is simpler to produce than its diesel equivalent, meaning the plant will eventually require less workers - but the exact number of future job losses was not yet clear, head of production Joerg Burzer said on a press call. A start date for production of the motor was not provided.

The digital training campus, which Daimler partnered with Siemens in March to develop and which will go live in 2022, would also create new jobs, Burzer said.

The factory's around 2,300 employees are guaranteed their positions until the beginning of 2030 under an existing union agreement.

"A year ago, we didn't know what would happen at the plant. Today we're embarking on what will hopefully be a successful transformation with our heads held high," Michael Rahmel, works council chairman at Berlin-Marienfelde, said in a statement.

US President Joe Biden climbed behind the wheel of an electric Hummer vehicle on Wednesday and sped off with a screeching of tyres, in a test drive ...
Motoring
2 weeks ago

Honda Motor Co said on Thursday its Japanese car factories will return to normal operations in December, after working at around 90% capacity this ...
Motoring
2 weeks ago

Honda SA is giving away free fuel for a year

From November 15-30, buying a new Honda Amaze, Fit or WR-V in SA will get you free fuel for a year
Motoring
2 weeks ago