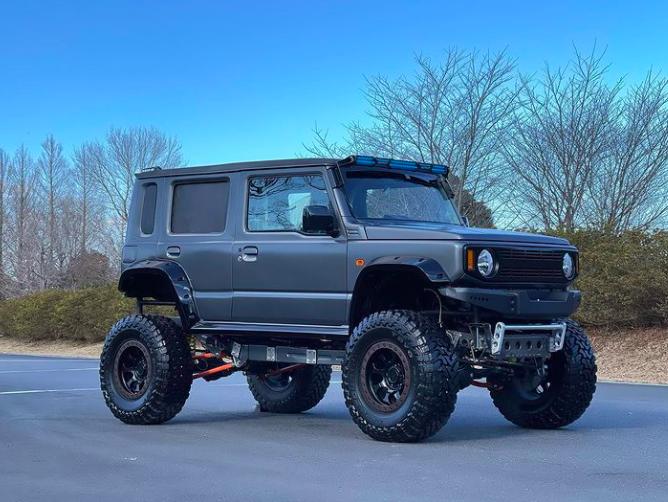 A five-door Suzuki Jimny doesn't exist. Though having said this the Japanese carmaker does have plans to bring one to market in the not-too-distant future. In the meantime, however, we'll have be patient and make do with the ever-popular three-door variant. Well, except if you're a group of students from Japan's Nihon Automobile College, that is.

According to an article on Motor1.com, a lecturer in the college's customisation department handed his fourth-generation Jimny over to eight students and told them to transform it into a five-door model that would be displayed at the 2022 Tokyo Auto Salon.

In the space of little over two months the dedicated students worked tirelessly; stretching the body and roof behind the car's B-pillar, fitting two extra doors and redesigning the rear fenders. While they were at it they equipped the diminutive off-roader with a lifted suspension system that makes the Jimny look like a miniature monster truck. Other neat details include an exposed external roll-cage and a roof rack kitted out with an LED light-bar and a pop-up tent, which would come in handy during overland excursions.

Ford has dropped a short YouTube video detailing the enhanced practicality of its next-generation Ranger bakkie.
Motoring
5 months ago

New 2022 Toyota GRMN Yaris is a GR Yaris on steroids

Is the Toyota GR Yaris a bit too tame for your liking? Looking for a little added spice? Well then you will pleased to hear that the Japanese ...
Motoring
5 months ago

New 2022 Chery Tiggo 8 Pro has Mzansi in its sights