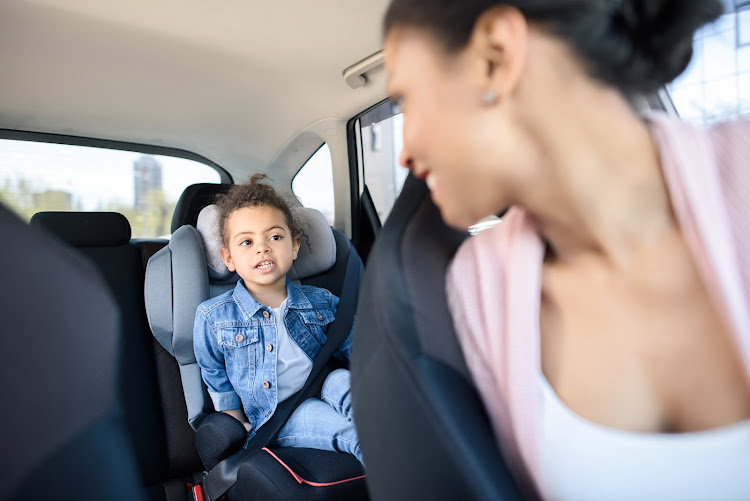 The AA says although CRS use appears to be increasing, too many people are relying on seat belts to restrain children, which is neither legal nor safety appropriate. File photo.
Image: lightfieldstudios / 123rf

Too many children remain unrestrained in proper child restraint systems (CRS) in vehicles in SA. This situation requires better traffic law enforcement and better education of drivers on the necessity of CR systems.

The Automobile Association (AA) says although CRS use appears to be increasing, too many people are relying on seat belts to restrain children, which is neither legal nor safety appropriate.

The study revealed that although CRS use appears to be increasing, it is concerning that a third of children are travelling completely unrestrained. It also found that although 46% of children between the ages of five and 12 were not restrained, “it is possible that, as these children fall into older age categories, parents may discontinue the use of CRS”.

The Association says while it is encouraging that laws on CRS exist in SA, a review of the laws that determine CRS use based on age is needed. The AA says the height and weight of children (babies and toddlers) should be the determining factor rather than age, given that children of the same age may differ significantly in size. It says the age factor may be determining seat belt use instead of use of proper CR systems.

“It may be said seat belts offer better protection than not wearing them, but they are less effective in reducing child fatalities or injuries in the event of a crash. CRS has been shown to reduce injuries in children aged five to nine years by 52% while safety belts reduce injuries by only 19%. It must also be noted that while flawed, the SA legislation prescribes that children aged three years or younger must be secured in proper CR systems,” notes the AA.

The AA’s CRS study further shows women tend to use CRS for children more frequently than male drivers. The study notes a possible explanation for the differences “could be related to men and women having different levels of concern, driving behaviours, and perceptions of risk”.

Another critical factor in terms of CRS use is enforcement and fines for non-compliance. In SA, the fine for non-compliance is R250 while in other countries it can be beyond R9,000, which sends a clear message that not using CR systems is a grave offence.

“If we are to curb the deaths of children in our country, a similar clear message must be sent locally,” urges the AA.

The research also revealed that while most drivers understand the importance of wearing a safety belt while driving, 74% of drivers were observed using safety belts when travelling with an unrestrained child. This indicates the drivers take their own safety into consideration but neglect the safety of the child or children with whom they are travelling . A possible reason could affordability and the belief that seat belts are viable alternatives.

“This finding indicates a lot of education needs to be done about the importance of CR systems, and that it is not only the driver who needs to be protected but also the passengers,” says the AA.

“It should never be accepted as normal for an adult to be travelling in a car with a child who is not restrained, even if it’s a short trip to the shops. The fact remains it is dangerous,” says the AA.

“Child restraint systems have been developed specifically to protect infants and children from getting injured in motor vehicles by restraining their movement in the vehicle. Along with better law enforcement and more punitive fines, we urge all drivers to protect their children and put them in proper CR systems wherever and whenever they are travelling.”

BMW and Audi suspend shipments by train to China

German carmakers BMW and Volkswagen's Audi have suspended shipments of cars by rail from Germany to China due to the war in Ukraine, the Nikkei ...
Motoring
3 weeks ago

With lift from 'big brother,' Aston Martin chases after Ferrari

After decades of ups and downs, British carmaker Aston Martin Lagonda is charting a more efficient and profitable way forward, leaning on technology ...
Motoring
3 weeks ago