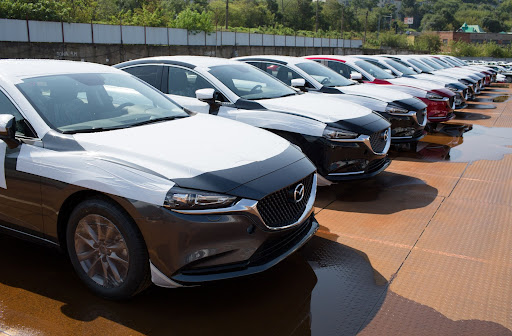 Mazda Motor Corp. which until recently has considered its operations neutral to dollar-yen fluctuations, is starting to see some benefit from the Japanese currency’s drop to 20-year lows, according to an executive.
Image: Bloomberg

Mazda Motor Corp which until recently has considered its operations neutral to dollar-yen fluctuations, is starting to see some benefit from the Japanese currency’s drop to 20-year lows, according to an executive.

Instead of looking to capitalise on benefits of a weak yen — such as increased competitiveness overseas and bolstered value of repatriated profits — Mazda through the years has focused strategies on minimising the risks it incurs during times of yen strength. But, “as would be expected with the yen depreciated to this extent, even against the dollar, conditions are swinging to the side of profit gains,” senior managing executive officer Yasuhiro Aoyama said in an interview.

Analysts expect the weaker yen to help Japanese automakers offset significant challenges they’re facing at the moment, including China’s virus outbreak, parts shortages and higher input costs. Among the manufacturers, Mazda and Subaru Corp — which have high export ratios — are expected to benefit more than others that have shifted large portions of production overseas.

With models exported from Japan, especially those with a high unit-profit level like Mazda’s CX-5 sports utility vehicle becoming more expensive, this will sway the direction of profit, Aoyama said. Barring significant supply constraints, there will be a number of opportunities to return the currency gains to customers in the form of incentives or services, for example, he said.

At the same time, Japan has in the past been exposed to the risks of a stronger yen, and current conditions “won’t last forever”, Aoyama said. In that sense, it’s safer in terms of profitability to look at exchange fluctuations “on the risk ride”, he said.

Aoyama said Mazda isn’t looking to make reactive long-term decisions based on current exchange-rate fluctuations. Locations of factories, for example, are decisions made based on evaluating various factors such as policy risks and efficiencies brought by moving supply chains closer to the end consumer, he said.

“If the yen depreciates and there’s that plus, then that’s lucky. It’s not something you can read or aim for,” he said.

Mercedes-Benz expects strong demand for high-end cars to allow it to offset rising raw material and transport costs with higher prices, forecasting a ...
Motoring
2 weeks ago

Renault will transfer its 68% stake in Russia's biggest carmaker Avtovaz to an auto research institute for one symbolic rouble, Russia said on ...
Motoring
2 weeks ago