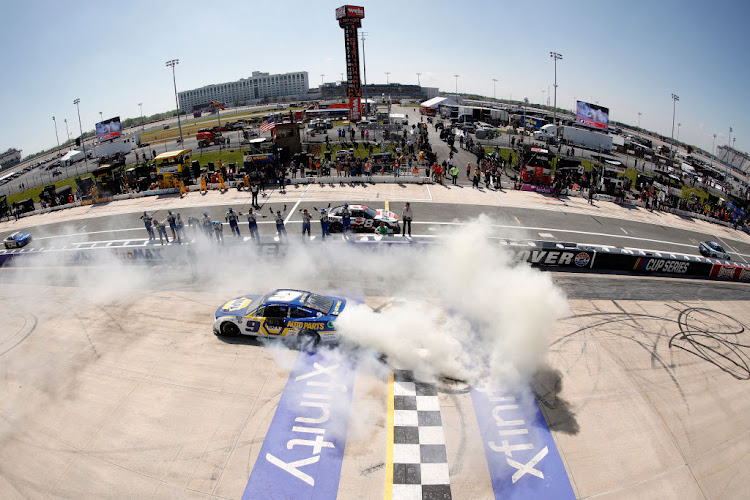 Resuming the race that was interrupted by rain on Sunday, Elliott's No. 9 Chevrolet passed Ross Chastain with just over 50 laps to go and finished 2.577 seconds ahead of runner-up Ricky Stenhouse Jr.

“We had some good circumstances finally,” said Elliott, whose 14th career triumph made him the final of the four Hendrick Motorsports drivers to record a win this season. “I really appreciate (crew chief) Alan (Gustafson) and our entire team for just sticking with it. We've had some tough races over the past four or five months.”

The victory was the first for Elliott since winning at Road America in Elkhart Lake, Wisconsin., last July 4. That was his second win of 2021, both on road courses.

His last win on an oval was at Phoenix in the season finale on Nov. 8, 2020, to close out his championship-winning season — a span of 46 races.

Stenhouse's previous best finish in the No. 47 Chevrolet this season was 10th at Fontana, California, on February 27.

“It's been a rough start to the season,” Stenhouse said. “Our short-track programme has been off, and all of our other good races where we've had good runs going, something's always happened. Really good to put this all together.”

Rounding out the top five were Chastain, Christopher Bell and defending Dover winner Alex Bowman in a race marred by 13 caution periods.

When the race restarted Monday after not even reaching the ending of stage 1 on Sunday, leader Kyle Larson and Denny Hamlin took turns at the point, but both drivers ran into problems stemming from tyre issues.

After seeing Hamlin win stage 1 but having a loose tyre get away during a pit stop, Larson looped his No. 5 Chevrolet as a tyre went down, causing minor damage to his car.

Seeking a Cup victory for the third time on his birthday, Kyle Busch took the lead on lap 212. He held the top spot when Hamlin's Toyota suffered damage after hitting Cody Ware after the Ford driver spun off Turn 4 shortly before the second stage ended.

Involved in an incident shortly after the race restarted, Ryan Blaney rallied to beat Busch to the stage 2 win, but Busch's No. 18 was soon out front again.

With 100 laps left, Busch led Bowman by 1.486 seconds, but Busch lost the lead to Martin Truex Jr. by pitting just before the 11th caution period.

At the field's rear on the restart, Bowman and Busch eventually bounced back to finish fifth and seventh, respectively.

Denny Hamlin has been ordered by NASCAR to undergo sensitivity training after he put up a social media post considered offensive.
Motoring
3 weeks ago