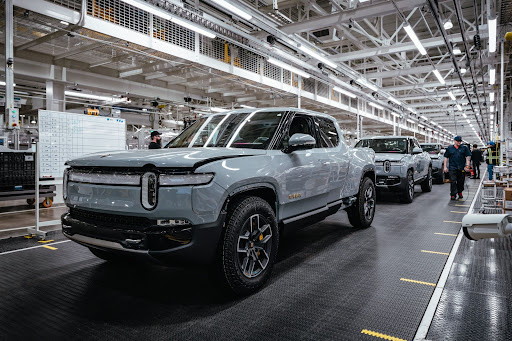 Rivian Automotive fell by 9.6% in US premarket trading after a media report that Ford Motor is selling 8-million of its shares in the electric-pickup maker at a discount.
Image: Bloomberg

Rivian Automotive fell by 9.6% in US premarket trading after a media report that Ford Motor is selling 8-million of its shares in the electric-pickup maker at a discount.

Ford’s sale is being handled by Goldman Sachs, CNBC’s David Faber said in a tweet.

The US manufacturer owns about 12% of the electric-vehicle hopeful, or just under 102-million shares, after taking a stake before Rivian went public last year. An insider lock-up period expired on Sunday after the November share sale that saw the company’s market value briefly top $100bn (roughly R1,623,004,000,000) making the developer more valuable at the time than Ford and General Motors.

Rivian shares have since plunged after its pickup launch was slower than investors expected.

JPMorgan Chase & Co is also selling a block of 13-million to 15-million shares in the manufacturer for an unknown seller, Faber reported, citing unidentified people. Both blocks are priced at $26.90 (roughly R436.24) — a discount of 6.7% to Friday’s close.

Irvine, California-based Rivian is a high-profile, well-funded newcomer to the growing pack of EV manufacturers. The IPO was the sixth biggest in US history, generating more than $13bn (roughly R210,928,885,000) to fund growth. However, Rivian has struggled to ramp up production of its products at an existing plant in Normal, Illinois, due to supply-chain pressures.

Toyota Group plans to invest 48 billion $624m to make electric vehicle components in India as the Japanese carmaker works toward carbon neutrality by ...
Motoring
1 week ago

SentiMETAL to release scale model of iconic BMW 333i

Mercedes-AMG and US musician, tech entrepreneur and philanthropist Will.i.am have collaborated to produce an intriguing one-off sports car.
Motoring
1 week ago