A classic Mercedes 230 SL arriving at dawn for a previous Cars in the Park at Zwartkops Raceway.
Image: Supplied

The annual Cars in the Park show for classic and special-interest vehicles is back at the Zwartkops Raceway near Pretoria on July 31, after a three-year break.

The organisers, the Pretoria Old Motor Club, were all set to celebrate the 40th anniversary of Cars in the Park in 2020, but the Covid-19 lockdown put paid to events, so now, in 2022, Cars in the Park is celebrating the 40th running of the biggest car show in Africa.

“There has been huge interest in the event,” says chief organiser Frik Kraamwinkel. “We are expecting no less than 150 clubs, who will stake out their spots around the racetrack, and interest from stallholders has been immense.”

This year the event will be run on the last Sunday in July, instead of on its traditional date on the first Sunday in August.

Recent Cars in the Park events have attracted more than 2,500 classic and special-interest cars, and up to 12,000 spectators. With the pent-up demand for car shows after two-and-a-half years of lockdown, the organisers are expecting one of the biggest turnouts ever.

This year Lazarus Motor Company is celebrating its 65th birthday at Cars in the Park, and will be hosting a huge display, consisting mainly of classic Fords and a few special Jaguars.

“We plan to bring at least 20 classic cars to the event, and if we can get an early-production example in time, we also plan to show the all-new Ford Ranger pick-up there,” said Colin Lazarus. 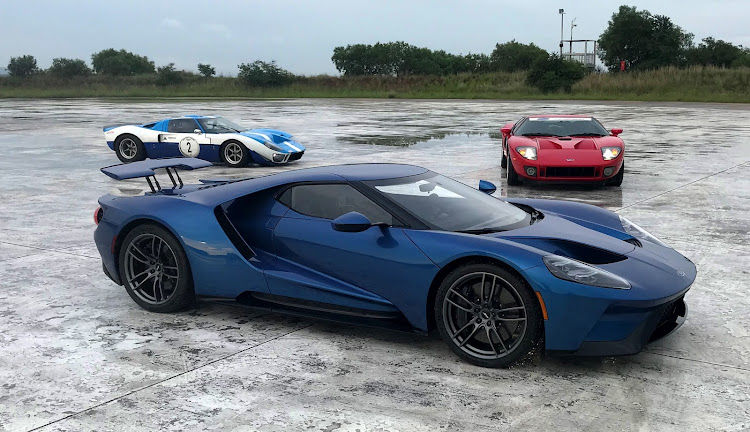 Lazarus will celebrate its 65th anniversary with a number of special Fords: the latest-generation Ford GT (foreground), a1966 continuation series Mk 1 Ford GT (left), and a 2005 Ford GT (right).

Among the special Fords Lazarus will be displaying includes a 1957 Ford Thunderbird, three spectacular Ford GTs and a 1957 Thames Trader transporter that has been converted into a race car carrier. Lazarus owns the only 2020 latest-generation Ford GT in the country, and this car will be flanked by a 1966 continuation series Mk 1 Ford GT and a 2005 Ford GT.

The Austin 7 car Club will be celebrating the centenary of this little English car. The Austin 7 was announced in July 1922, and this tiny 750cc four-cylinder car transformed the British motor industry in its 13-year production life. Some 290,000 were produced and many found their way to SA.

It is interesting that when the famous Issigonis-designed Mini was first announced in 1959, the Austin version was at first known as an Austin Seven. The Morris version, all-but-identical, was known as the Morris Mini Minor, and in 1961 both Austin and Morris versions were then known as Minis, as this is what the public at large were calling them.

In the Special Vehicles section of Cars in the Park, housed in the pits at the Zwartkops track, a special and rare 1922 Ford Model T pick-up will be displayed. This vehicle is 100 years old, and genuine Model T pick-ups are extremely rare. This one is owned by Andre Wessels of Wellington in the Cape, who will be transporting the car all the way to Pretoria to be part of the big Ford presence at this year's event. Wessels will also be showing a 1914 Ford Model T Speedster, a racy version of the Model T.

In the early days of production Model Ts were imported to this country. However, Ford Model Ts were the first cars to be assembled in SA in significant numbers, local production starting in February 1924 in a converted wool shed in Port Elizabeth. American production of the Ford Model T ran from 1908 to 1927, during which time an astounding 15-million cars were built. The Model T truly was the car that “put the world on wheels”.

With 120 car clubs exhibiting, visitors can be sure to see their favourite classic car on display at Cars in the Park: Volkswagen Beetles and Kombis, Ford Cortinas and Escorts, rumbling V8-engined Mustangs, Camaros and Chargers, magnificently-kept Mercedes-Benzes and others.

Spectator entry fees are R120 per person (R100 if booked through iTicket). Children under 12 are free. Drivers of classic cars built before 1985 are admitted free of charge, and are advised to get there early, with gates for exhibitors opening at 6am. The show runs until 4pm on the Sunday.

Tesla's new car factories in Texas and Berlin are "losing billions of dollars" as they struggle to increase production because of a shortage of ...
Motoring
6 days ago

Ford's flamboyant Very Gay Raptor will be making an appearance at this year's annual Goodwood Festival of Speed that begins on Thursday.
Motoring
1 week ago

The police service is becoming a Trojan horse for criminals looking to neutralise any form of trust citizens might have left in the country's ...
Motoring
1 week ago