Sorry Tesla but Hyundai is quietly dominating the EV race 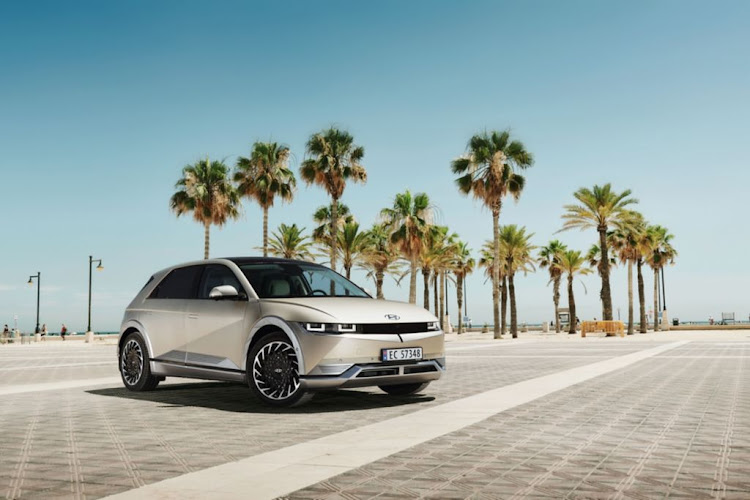 The Hyundai Ioniq 5 is ripping up the EV sales charts.
Image: Supplied

Pipe down for a second, Elon, the hottest things in the auto industry — the most electric electrics — now come from Hyundai.

Earlier this year, the South Korean carmaker rolled out two new battery-powered cars — the Hyundai Ioniq 5 and its sibling, the Kia EV6 — which promptly tore up the sales charts, passing the Nissan Leaf, Chevrolet Bolt and every other electric vehicle on the market not made by Tesla.

In the US this year through May, Hyundai sold 21,467 of these two machines, besting even the white-hot Ford Mustang Mach-E, which was snapped up by 15,718 drivers.

“From an EV perspective, they’re really just kind of cleaning the floor,” said Edmunds analyst Joseph Yoon. “I honestly don’t know if any dealers around me have any in stock.”

Tesla still sells far more cars, but it took the company a decade to deliver as many electric vehicles as Hyundai managed in a few short months. Even Musk has been impressed.

Granted, Hyundai is no startup. It started designing its current hits about six years ago, according to Steve Kosowski, manager of long range strategy at Kia America. At the time, the Chevrolet Bolt had just hit the market and Kia considered a car similar in size and scope.

Maruti Suzuki India Ltd, the automaker that sells every other car on the nation’s roads, believes electric vehicles aren’t the answer to reducing ...
Motoring
1 month ago

Ultimately, Kosowski and company green-lit something far larger, sportier and swankier — at a slightly higher price.

“The thinking was, with the platform we have and the market understanding we have, let’s put together a really bold, breakthrough proposition,” he recalls. “We’re going to make a statement that Kia is here.”

The timing was favourable. EV adoption is picking up in the US, thanks to a surge in both climate concern and gasoline prices. And though there’s a run on battery-powered vehicles, there still aren’t many to choose from. Of the 30 or so models for sale on the US market, only a handful can be had for less than $45,000 (roughy R710,000) and most of those are relatively small, dated cars like the Nissan Leaf.

The Ioniq 5 and EV6 both offer the cargo space of a small SUV, the size and shape of vehicle that has taken over US garages of late. Both cars ride on the same modular platform, incorporate the same motors and batteries and post similar speed specifications.

They are tricked out with screens and charge at some of the fastest rates in the industry, adding almost 25km of range in a minute under ideal conditions. They also offer a couple features that are novel in the space: pedals to adjust regenerative braking and bi-directional power (yes, you can run power tools or charge another EV with one of these machines).

Starting around $40,000 (roughly R630,000), they are drawing buyers with smaller budgets who otherwise may have bought a starter sedan, says Yoon at edmunds.com. And yet, they are plush enough inside to pull from the top of the market as well, as drivers trade in luxury cars with internal combustion engines.

“These two cars have come in kind of at the right price and the right size for a lot of buyers,” Yoon said. “And I think there’s a level of inherent trust with a big manufacturer getting in the game with a mainstream.” 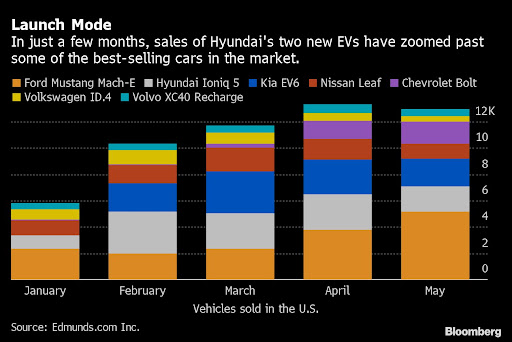 The hottest electric cars in the US market aren’t coming from Tesla factories. All eyes are on Hyundai’s Ioniq 5 and the Kia EV6.
Image: Bloomberg

Emad Zia and his wife had only been planning to “dip our toes” in the EV market when Hyundai’s new cars launched this winter. The two are fond of sporty cars — preferably with a stick shift — but wanted something bigger than the Volkswagen Golf R and Mazda Miata in their Dallas garage. They settled on the Ioniq 5 purely based on photos and speed specs, then ordered an EV6 when they couldn’t find the Hyundai anywhere close to the sticker price.

“We’re used to having — I don’t want to say underdogs — but unique cars,” Emad Zia explained. “And the looks and uniqueness of this car just doesn’t get old.”

So far, roughly three in four EV6 buyers were previously driving a car from another brand, according to Kia, and only one in 10 has previously owned a plug-in vehicle. The current waitlist for the EV6 is about six months long and the average transaction price is a few thousand dollars above the sticker price, according to Bloomberg Intelligence, which suggests most buyers are willing to pay a premium.

“Our dealers are reporting that these cars are sold within hours,” said Eric Watson, vice-president of sales at Kia America Inc.

Kosowski said the new Hyundai products are capitalising, in part, on “Tesla fatigue” as the first-mover sedans and SUVs become ubiquitous even beyond coastal states.

Also, Hyundai owners are sticking with what they know: of those trading in a Hyundai or Kia recently, about 60% stayed with the brand, according to Edmunds.com.

Hyundai plans to launch a new battery-powered car every year for the rest of the decade and is spending $16.5bn (R261bn) to boost EV production in South Korea. By 2030, the automaker wants to claim 12% of the global EV market, some 3.2-million cars and trucks.

“They definitely have a leg up,” Yoon says. “Toyota and Subaru will have to see if they can catch them.”

Italy, Portugal, Slovakia, Bulgaria and Romania want to delay a European Union plan to effectively ban the sale of new petrol and diesel cars from ...
Motoring
1 month ago

India will introduce a safety rating system for passenger cars, a measure it hopes will encourage manufacturers to provide advanced safety features ...
Motoring
1 month ago

Sorry, Elon. Hyundai, Kia steal a yard on Tesla in the EV race

Tesla still sells far more cars, but Hyundai and Kia have made massive strides in a few short months
Lifestyle
1 month ago