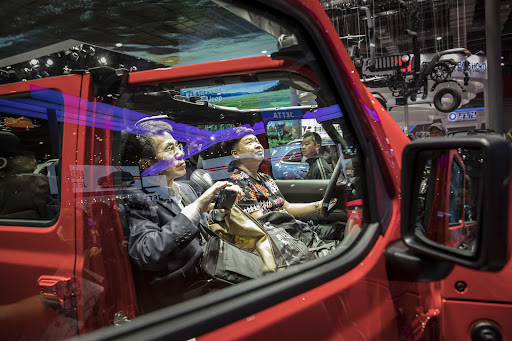 The golden era of brisk growth and abundant profits for international companies and their local joint venture partners is over.
Image: Bloomberg

It was one of the first international car brands to enter China, widely recognised by consumers and understood by its owners to have huge potential. And yet Jeep is shutting down its only plant in the world’s largest market.

The announcement this week that Stellantis plans to terminate its local joint venture with state-owned Guangzhou Automobile Group was the culmination of a seemingly can’t-miss wager gone awry. It begs unsettling questions about what the future holds for foreign manufacturers in China.

The government set out 40 years ago or so to develop the nation’s motor industry by pairing local companies with experienced international players, among the earliest of which was former Jeep owner American Motors. These proverbial training wheels are not only no longer needed, but out of step with President Xi Jinping’s desire for China to become more self-reliant. The golden age of brisk growth and abundant profits for these joint ventures appears to be over.

“We’re at the beginning of the end of the JV era in China,” said Michael Dunne, CEO of ZoZo Go, a consultancy that advises companies how to navigate the nation’s motor industry.

“It's still the biggest market and nobody wants to get out, but you start to look around and say, ‘Why am I in this marriage?’”

Stellantis’s union with Guangzhou Auto is a few months removed from an openly testy moment. While Bloomberg News had reported in September that Stellantis had wanted to raise its ownership stake in the 50-50 venture, the carmaker known as GAC Group claimed to be caught off guard when its partner made this plan public in January. Less than six months later, Stellantis has opted for a divorce, citing a lack of progress toward increasing its shareholding to 75%.

CEO Carlos Tavares isn’t ready to completely abandon China. The 63-year-old Portuguese and paragon of cost discipline has alluded to an “asset-light” business model for the company formed last year from the merger between PSA Group and Fiat Chrysler. He may be able to profitably ship electrified Jeeps into the market, but no carmaker is pursuing such a strategy at high volume. Import duties aren’t as inhibitive as they used to be, but at 15% keep overseas brands from pricing their wares close to increasingly competitive domestic companies.

Just 22 days after Tavares delivered that address, he witnessed the disastrous consequences of being “asset-heavy” in a country that’s become a geopolitical pariah. PSA’s long-time French rival Renault caved to pressure from Ukraine and its allies to stop operating a Moscow plant and reconsider its position as majority owner of Lada-making venture AvtoVaz. Renault later agreed to transfer its €2.2bn (roughly R2,253,471,000) Russian business to state entities for the token sum of one ruble.

Jeep knows full well what a nightmare it can be when politics and car production mix. A decade ago, then-boss of the brand Mike Manley, who went on to be Fiat Chrysler’s CEO, said Jeep would consider localising every one of its models in China. Conservative media outlets and 2012 US Republican presidential nominee Mitt Romney distorted those comments to suggest Jeep was going to uproot from the key battleground states of Ohio, Michigan and Illinois, and move its manufacturing to one of America’s nemeses. PolitiFact later named this their annual Lie of the Year.

If Tavares follows through with terminating the Jeep venture with GAC Group, he’ll be left only with a JV with Dongfeng Motor that similarly never took off as PSA had hoped. The future of that business also looks uncertain, with the two having recently agreed to a framework for Dongfeng to sell off what’s left of its shareholding in Stellantis, which has shrunk to less than 3.2%.

International carmakers that have fared much better than Stellantis in China, including Volkswagen and General Motors, also are having a tough time preserving their position. Dunne believes the two are “the powerhouses of yesterday”.

“You can feel the momentum has shifted in favor of Chinese brands,” Dunne said.

“The government is talking about self-sufficiency, nationalism, depend on ourselves. Chinese consumers say ‘I can get a pretty good car  from Chinese brands.’”

Volkswagen’s Porsche plans to introduce a new electric luxury SUV and bolster profits in the coming years as the brand tries to win over investors ...
Motoring
3 weeks ago

Stellantis announced the "orderly termination" of its loss-making joint venture with Chinese carmaker GAC, which has been producing Jeep vehicles, ...
Motoring
3 weeks ago