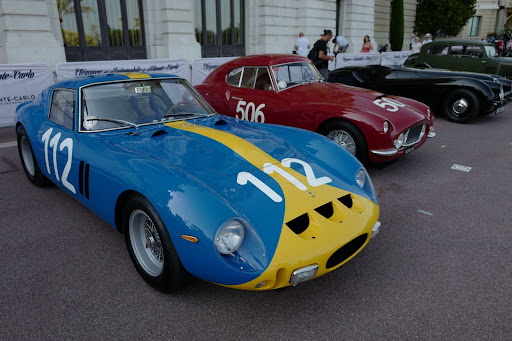 A rare 1962 250 GTO and three-seater prototype never shown in the country will be among 1,000 cars on display over the weekend.
Image: Bloomberg

Uber-rare vintage Ferraris are rarely spotted in the wild, more commonly coddled in museums or climate-controlled garages of the 0.1%. A stable full of them takes what for many is a once-in-a-lifetime event to a new level.

Such will be the display from September 3 to September 5 outside London on the grounds of Hampton Court Palace, the 16th century manse that later became the home of Henry VIII and the Tudor dynasty.

“It will likely be the greatest display of Ferraris ever assembled in the UK,” said James Brooks-Ward, CEO of Concours of Elegance, now in its 10th year, a gathering meant to rival the rarefied events in Pebble Beach, California, and the Concorso d’Eleganza Villa d’Este on Lake Como in Italy.

On the palace’s manicured lawns this year will be one of the world’s rarest and most valuable cars, a Ferrari 250 GTO, one of just 29 built.

This particular example, chassis number 4219GT, was reportedly sold for about $3m about R49.53m) to a London collector in 1993. Rather than coddled, these days it can be seen racing on wintertime ice in St Moritz alongside other rare rally cars.

A sibling of the GTO also on display, will be a 250 GT SWB (short wheelbase) SEFAC, a track-optimised model built in 1961, which British racing legend Stirling Moss piloted to win at Goodwood, making it the fastest GT car in the world at the time.

The organisers roped in for the first time in the UK a prototype 1966 365 P Berlinetta Speciale, known as “Tre Posti,” one of two twin cars that were unique for their quirky three-seater cabin and the marque’s first mid-mounted V12 engine. The design was meant to become a Le Mans racer.

Another highlight is the elegant 195 Inter, a very early Ferrari road car which debuted at the Paris Motor Show in 1950 and one of 28 ever built.

This year's Concours of Elegance was devised to celebrate the 75th anniversary of Ferrari's formation in 1947, with about 1,000 cars able to view over the weekend.

Defender, Range Rover and Jaguar stunt cars from 'No Time To Die' are among lots being auctioned to mark 60 years of James Bond films.
Motoring
1 week ago

Hyundai and Kia are going to the moon. The sister automotive companies, who have pioneered technologies such as robotics and Advanced Air Mobility ...
Motoring
1 week ago

Motorists expecting a price war at petrol stations after the government proposed a new price cap on 93 unleaded will be disappointed, as there won’t ...
Motoring
2 weeks ago