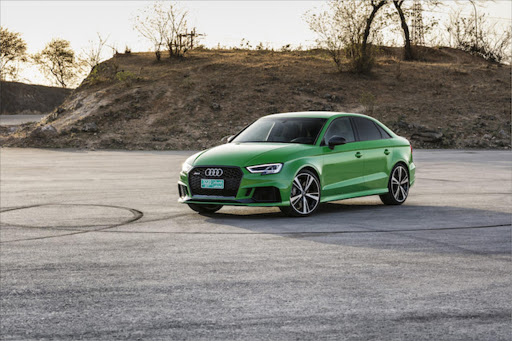 Audi RS 3 Sedan
Let’s get down to brass tacks — is the new RS3 a hot, understeery mess?

Contrary to what BMW fanboys (and girls) might tell you, this RS3 handles in an extremely neutral manner. Audi achieved this by bolting in the much lighter aluminium-blocked version of its 2.5-litre turbocharged five-cylinder engine (a saving of 26kg over the front wheels) as well as giving the Quattro all wheel-drive system more rearward bias — up to 100% in certain situations.

In fact, not since the RS4 of the late-Noughties has a four-wheel-drive Audi sedan been so eager to shake its tail feathers. So, no, to answer your question, the all-new RS3 is not the lumpen nose-plougher internet trolls might trick you into believing it is.

Does it pack enough “vrr-pah” to keep me satisfied?

Sigh. You millennials and your ridiculous lingo. Anyway, yes, the RS3 makes “vrr-pah” for days. Twist the key in the ignition and that exhaust immediately belches out a thunderous staccato that will earn you whistles of envy from everybody within earshot. This furious flatulence also interjects every gear change, particularly when you switch the engine and transmission to dynamic mode on the (standard) Audi Drive Select system.

It’s not all noise swagger, though, as the RS3 is seriously rapid: fast enough to give many supercars a bloodied nose — especially in a straight line. Audi claims a zero-to-100km/h time of 4.1-seconds and it feels bang on target. Some of my peers who have access to GPS measuring equipment actually got this down into the threes. So, yes, this thing is a proper giant-killer.

Like a standard Audi A3 sedan only sportier. So expect bombproof levels of build quality mixed with model-specific features such as a flat-rimmed, leather-alcantara steering wheel (nice in the hands) and supportive sports seats that keep your frame in check while exploiting the car’s road-handling potential.

What was disappointing, though, was the fact that things like satellite navigation, adaptive cruise control, Audi smartphone interface and virtual cockpit remain relatively expensive options. Not optimal on a car that’s very nearly R1-million.

Can I use it every day?

Of course you can — it’s not some high-strung Italian sedan powered by a Ferrari engine! Although do bear in mind that the ride is on the harsh side — particularly across our crappy Johannesburg road network. Speaking of shoddy roads, I would advise you to be extra vigilant of irregularities as those super skinny 255/30 19-inch tyres are not exactly robust. I actually popped one hitting a small lump of dried concrete on the highway.

Should I choose it over a BMW M2?

I’ve been waiting for this question! OK, so, honestly, I find the M2 the more exciting of the two simply because it is rear-wheel-driven. Consequently the BMW feels a lot livelier and is the kind of car that encourages you to misbehave a bit. It’s also the one you’d most want to take around the racetrack.

In comparison the RS3 feels, well, just like a fast Audi: buttoned-down and super composed but not necessarily all that engaging. It doesn’t really coax your inner Stig. Although having said this the RS3 is the more usable of the duo thanks to that all-wheel-drive system. You can unleash more of the power more of time in a much wider spread of driving conditions. – Thomas Falkiner