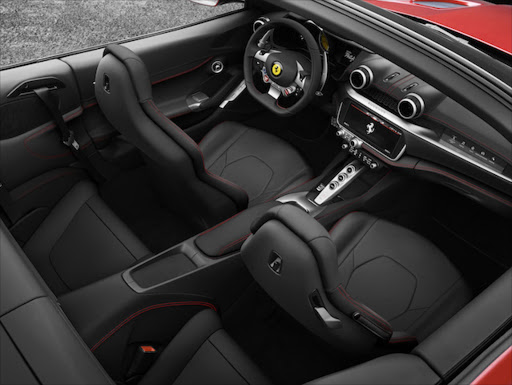 Ferrari Portofino
Less brash than its stablemates, the Portofino is still mighty fast. As a Ferrari and a daily driver it’s more authentic than the California T, but that won’t automatically make it the best place to park a few million.

The California T’s daily-driver goals of comfort, flexibility and accessibility meant it wasn’t ever going to be seen by the tifosi as a proper Ferrari.

Somewhere between these two extreme views is the path the new Portofino has to find when it arrives in SA in the last quarter of 2018.

It starts well, even before you open a door, with new folding-roof technologies allowing it to host a far more sports car shape than the three-box California. Its proportions are more balanced, its boot height lower and the rear roof angle shallower and sleeker. There’s something of the 575 Maranello about its rear haunches.

The body boasts all manner of aero tricks. The angled, tubular cut behind the front wheels extracts hot turbulent air from around the wheels, and breaks up what would have otherwise been a long, plain panel.

It’s clearly fast enough to wear a Prancing Horse on its steering wheel, bellowing to 100km/h in 3.5sec and crunching through 200km/h in 10.8sec before running out of acceleration at somewhere claimed to be just beyond 320km/h.

Its chassis and suspension engineering are new, but it retains the same basic footprint of the outgoing car, the bigger metal bits of the 3.9-litre twin-turbo V8 engine and the seven-speed dual-clutch transmission.

But ranges of "same" are at play. The carry-over engine block uses new aluminium pistons and connecting rods and a slight upgrade of the flat-plane crank, but the biggest hardware upgrade has been the slimming down of the three-piece, welded exhaust manifold for a single-piece sand-cast unit.

The airflow has been considerably cleaned up, according to Ferrari, giving it a smoother induction path and a clearer, straighter exhaust path. The intercoolers are lighter and angled, the exhaust pipes have larger diameters and closed-loop electronic "loud" flap control and the mapping is all new.

The Portofino punches out 441kW power at 7 500rpm and while it peaks at 760Nm torque between 3 000rpm and 5 250rpm, Ferrari follows its own logic by only delivering it in seventh gear. It adjusts the maximum torque in every other gear in an effort to limit wheel spin. It’s a 29kW jump from the California T and 5Nm more.

It retains the seven-speed dual-clutch transmission and scores the latest generation of Ferrari’s electronically-controlled differential, the E-Diff3.

The springs are stiffer at all four corners and it also scores metal-filled fluid in the dampers to make them magnetically variable in their responses.

For the second time, the Portofino mates a Ferrari with electric power steering.

There are other tricks. Instead of the flat plastic undertray, there’s now an aluminium undertray that’s a fully stressed member, contributing to the 35% rise in stiffness. Ferrari claims it’s 80kg lighter than the California T.

But most Portofino buyers will be more interested in the interior improvements, with an all-new interior. The instrument cluster isn’t fully digital, though the traditional central tacho is flanked by two digital displays. It makes for a busy dash, especially if you’re keeping an eye on the speedo as well.

In the middle of the dash sits a 10.3-inch touchscreen display that looks a lot like an upside-down BMW dash-top infotainment screen.

Ferrari makes a big thing of talking about the new magnesium-framed seats giving 5cm of legroom to the rear-seat passengers, which doesn’t say a whole lot of positive things about what they had to work with before. The car is calmer, less turbulent with the roof down than the California.

The roof drops or raises in 14-seconds at up to 40km/h, which makes it more versatile than its predecessor.

The seats are far easier to climb into than they are in a 488, and the leatherwork is impressive, even though the shutlines and joins lack the crispness of an AMG or an Audi Sport model.

It’s surprisingly comfortable. There’s little to fault with the driving position, with the seat reasonably straight on, the steering wheel adjustments effective and the pedals well placed. The only hiccup is Ferrari’s adherence to steering column-mounted gearshift paddles, which rise high but stop about halfway down the wheel, so you’re sometimes grabbing air trying to pull a gear.

The engine fires up in a quiet rumble. There is always the feeling that a highly stressed beast lurks down in the depths of the throttle travel, with a slight rasp and hiss filtering the mechanical furore in Comfort mode.

Stomp the throttle in Sport mode however, and it’s a different story. Ferrari insists it tuned the sound in three phases: bass for low revs, tenor from 2 500 to 5 000 revs and soprano above that. It has the second two pretty well nailed, rising with surprising progression for a turbo motor until it’s screaming ferociously at 7 500rpm, but the bass needs work. Too often, at light throttle work around town, its sound isn’t the stuff of fable, threatening to awaken long-dead gods of racing, but sounds more like cows lowing simultaneously into dairy shed feed tins.

Ordinarily, on a car such as a 488, that will not be a problem because low revs are something to touch fleetingly on the way to parts of the rev range that are more fun. On the Portofino, its everyday drive-to-work philosophy makes it much more critical as people will live in this part of the rev range most often.

The other questionable area is the steering. Ferrari claims it delivers more feedback than before, but not even Porsche has EPS nailed yet.

There is a rider on all of this, and that’s because the roads we used were rubbish. Dotted with long urban areas and broken road surfaces with very little grip, the handful of corners we could find to explore the Portofino’s chassis weren’t ideal for this kind of work. Better roads might bring out better steering performance, but it’s still lacking the relaxed zone around the straight-ahead that marks the great highway runners.

The steering is accurate and intuitive when you’re pushing the car.

It has no holes in its delivery, with short early gears helping it to hurl itself into traffic gaps briskly and to blast into the middle distance with enthusiasm.

The gearshift snaps crisply in Comfort mode and sharply in Sport. The noise of downshift is far sexier from outside the car than inside it, with pops and crackles every time a car goes past. Just don’t worry so much about letting the car do its own gearshift thinking. It’s more intuitive and more accurate if you use the paddles yourself.

It’s also terrific at coping with lumpy roads. It has three driving modes, which change the maps for the powertrain, suspension, skid control and the steering, but the real clever part is the damper button on the steering wheel. Push that and, whatever mode you’re in, it will put the dampers into the softest mode, so you can push on hard and ride the bumps softly.

It’s too firm in Sport on the surfaces we found, jittering and tense in its reactions, which seemed in line with supercar positioning but at odds with its more GT pretensions.

Where it walks its best line between supercar and GT is in its handling. Its body control is so good that we could fling it into a series of corners with undue haste and the car hunkered down and blasted through.

It’s a far better sports car than the California T was, with better handling, more grip, less visible skid control, greater vocal richness and linearity and a greater breadth of ability at its extremes.

Yet, on the roads we had to drive on, it didn’t feel demonstrably better as a grand tourer, mainly due to fidgety highway steering and a lack of low-rev aural intrigue. And surely, for a day-to-day driver, that’s the part of the package that needed to take the big leap forward. – Michael Taylor