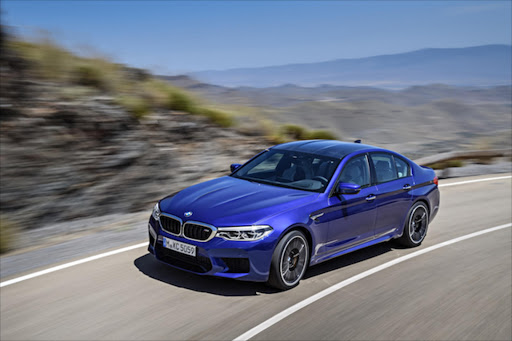 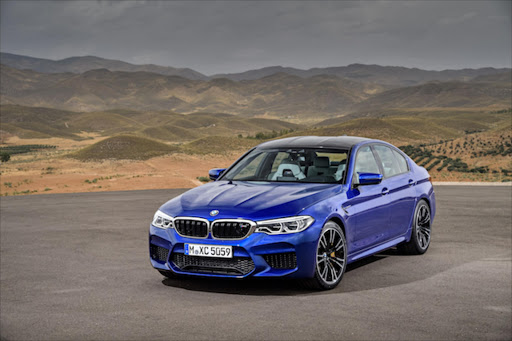 The beast is back! Is it more brutal and bad-to-the-bone than ever before?

To make this happen the M-Division engineers bolted in new turbochargers (for extra boost) plus a revised fuel injection system that delivers its fossil fuel load at greater pressures. Aiding these figures in the constant pursuit of performance is a reduction in weight. Yep, the new M5 weighs 15kg less than its predecessor thanks to a carbon fibre roof skin (now standard fare) and lighter exhaust system. The latter also gives the motor a bit more character thanks to some fancy control flaps out back and a Helmholtz resonator fitted between the two headers.

Now despite there still being some digital assistance pumping through the speakers inside the cabin, these actual hardware modifications do a great deal to improve this car’s timbre. Especially when compared to the outgoing model, which was something of a sonic letdown.

There’s only one gearbox on offer this time around — an eight speed Steptronic. It’s not quite as snappy as the old dual-clutch M-DCT transmission (particularly on downshifts) but it’s smooth and copes well with the amount of power on tap.

I see BMW has given the new M5 all-wheel drive. Must make it as dull as an Audi now, right?

Not at all, no. A big, brawny super saloon with 441kW thumping through its rear wheels is nice out on a paper-smooth racetrack. Across our generally shite South African roads, however, it is anything but.

M3. M4. M6. It doesn’t matter what the number suffix is — they all struggle to put their power down without the traction-control light staying permanently illuminated. It’s frustrating. It’s annoying. It’s the reason why, as the world’s kilowatt output numbers kept on climbing, I started preferring my sports sedans adorned with four rings and a quattro badge. For the simple reason being that you can make use of all that muscle more of the time.

So if anything the addition of all-wheel drive has actually improved the M5 breed: you can now flatten that throttle to the firewall with full confidence across a much broader range of road surfaces and weather conditions. BMW has also given you a choice of three modes. 4WD is the default mode but you can switch to Sport 4WD, which does allow for a decent amount of tail-waggery before the front end helps pull you straight.

The party trick though is 2WD mode that, duh, sends all of the drive purely to the rear. This is ideal for track days or performing huge smoky burnouts outside trendy Parkhurst bistros. Chicks dig it, you know.

The old M5 got a lot of flak about its lack of driver involvement. Has BMW fixed this?

The F10 did receive a lot of criticism for its lack of driver feedback and rightfully so. I for one thought it was the epitome of Schedule Six automotive Novocain, as did many other members of the world’s automotive press.

Thankfully BMW read our inked disdain and improved things considerably here in the F90. A lot of that numb aloofness has been burnt away and you now have at least some sense of how the car is hugging the asphalt rushing away beneath you.

It’s not quite as detailed as, say, the excellent M2, but at least there’s now something flowing through the chassis and steering wheel to make you feel in some way part of the driving experience. In terms of overall handling prowess the new M5 doesn’t much try to hide what it is — a large four-door saloon designed primarily for everyday luxury and devouring long-distance hauls. Drive it at 7/10ths and you’ll be happy.

Beyond this it started to lose its composure and feel somewhat flustered. I’m not saying the M5 is bad — far from it — but it’s not quite as sharp as the class leader, the excellent Porsche Panamera.

How is it as an everyday proposition? It’s not too hard?

Not in the slightest. BMW M adaptive suspension forms part of the M5 package and works incredibly well when stuck into Comfort Mode (you also get Sport and Sport Plus Modes for when you’re feeling more frisky). In fact one of the best traits about the new F90 is the way it copes with road scars.

It actually rides better than the X2 I drove right after the M5 went back — quite a thing when you consider it rides on large low-profile tyres (265/40 R 19 at the front and 285/40 R 19 at the rear). Interior refinement is breathtakingly impressive with barely a hint of road or wind noise when cruising along at just over the national limit.

The front "M" seats are both soft and supportive and there’s plenty of cockpit adjustability to find your ideal driving position when behind the steering wheel. If you enjoy travelling long distances there’s probably no better machine to do it in right now.

Accommodation in the aft quarters is generous — even for a tall person like me — and the boot will happily swallow everything from golf bags to bodies with equal aplomb. It really is a machine you could live with daily. Hell, even more so when you factor in its strangely demure Q-car looks.

So would you say this M5 marks a return to past glories?

I’d say that the new M5 is the best effort since the E39 M5 ruled the über-saloon roost in the early 2000s. The F90 is a consummate allrounder that blends mad pace, practicality and comfort with — finally — a driving experience that now does that M badge some justice.

The addition of all- wheel drive is an absolute game-changer here: one that sees the M5 re-establish itself as a properly viable alternative to the Mercedes-AMG E63, Porsche Panamera Turbo and Audi RS6. – Thomas Falkiner