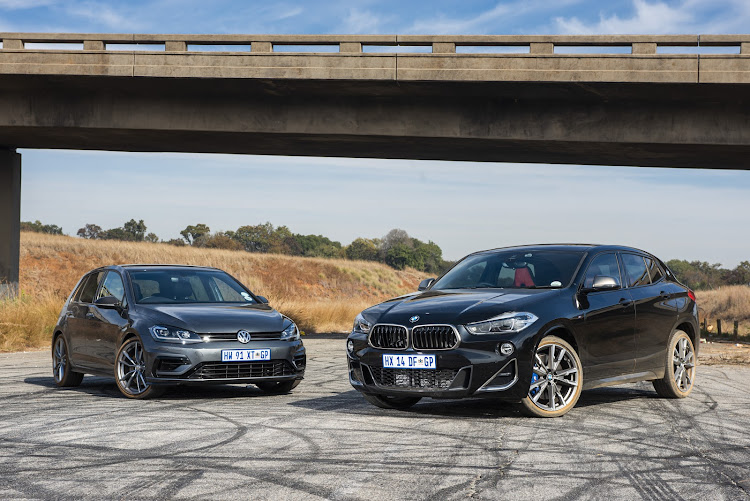 A picture is worth a thousand words, as the classic adage goes. Naturally, the first inference to be made from the duo parked here is one of an uneven match-up. But read on, because there is more than a bit of commonality in this arrangement.

These are premium, five-door compacts — the one on the right is merely standing on its toes — or sporting boots with an elevated platform. You pick the metaphor. Both hail from Teutonic brands that rate highly on the aspiration lists of countless South African shoppers. Both are powered by engines with two-litre displacements and automatic transmissions. Both are turbocharged. And both feature all-wheel drive set-ups.

The Volkswagen Golf R is a more traditional expression of the hot hatchback genre and is a sales mainstay for the brand. In fact, this derivative and the less-powerful GTI account for greater volumes than the regular versions of the Golf. The BMW X2 M35i, meanwhile, could be described as something of a hot crossover.

Oh, yes, the modern compact crossover: a segment that, in addition to the ubiquitous sport-utility genre, has grown in popularity. Performance-oriented versions of this template are nothing new, of course. Remember the Audi RS Q3 of 2013, with its soulful five-cylinder in a smallish, but tallish body? It would not be remiss to describe it as the instigator of a sub-division, because Mercedes-AMG followed suit with the GLA 45.

We devised two simple tests for the BMW and Volkswagen: a drag race to crown the quickest, and a gymkhana on dirt to see which was more agile. An exhausting and selfless undertaking in a bid to address a question that you might not have asked — but one we felt needed an answer anyway. If you sought the basic prerequisites of a German, C-Segment car with a notably sporty flavour, would those tenets be more rewarding in a traditional hatchback or a newfangled crossover? 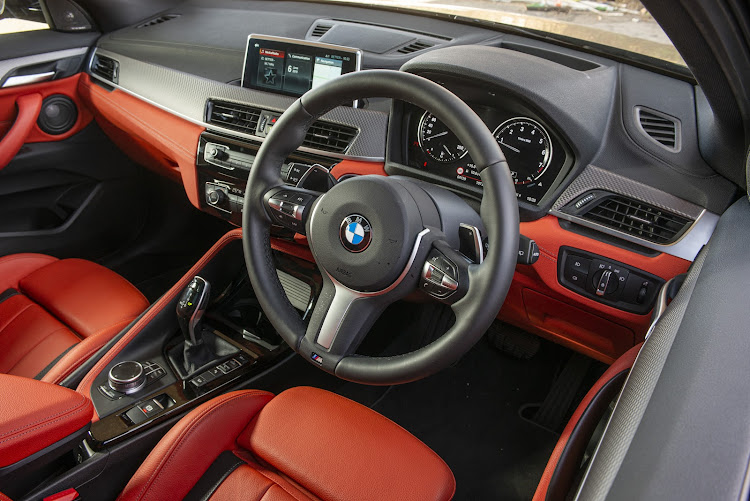 The interior of the BMW.
Image: Waldo Swiegers

The Volkswagen Golf R has an output of 228kW and 400Nm of torque, shifted via a seven-speed, dual-clutch transmission. Its makers claim a sprint time of 4.6 seconds. The BMW X2 M35i serves up 225kW of power, which is fractionally less, although the torque figure is superior at 450Nm. An eight-speed, torque-converter automatic is on duty and according to the manufacturer it will dispatch the 0-100km/h figure in 4.9 seconds.

With both models set to their most dynamic electronic modes, motoring lensman Waldo Swiegers and I lined-up and prepared to launch. The outcome seemed akin to me and my portly self trying to outpace Caster Semenya. The Golf R dashed forth, leaving the X2 M35i in the rearview mirror. This was replicated after switching drivers. And our Garmin GLO GPS device indicated that the Volkswagen had completed the run in 5.5 seconds, with the BMW a second slower at 6.6 seconds.

It is worth noting the weight disparity between the two, with the R tipping the scales at 1,417kg and the M35i at 1,570kg – a full 153kg heavier. So, the result of our duel was aligned with the quoted on-paper times, and now you know for sure which is superior in a traffic- light grand prix. But what would transpire should you feel like exploring dreams deferred, unleashing your amateur rally driver ambitions? To find out we headed to the dirt skidpan at ADA Training & Outdoor Centre in Hartbeespoort and set up a technical gymkhana that would see dust raised and sideways action attained.

In alphabetical order, we started with the BMW. Its ground clearance of 182mm is ample for mild sojourns off tarmac. Underfoot, the xDrive system sends power to all four corners, with an electronic differential-lock at the front axle. With chilled composure and impressive manoeuvrability, the M35i tackled our slalom, lane-change simulation and final loop before stopping neatly in the box, registering a time of 40.9 seconds. It felt decidedly more focused on the business of keeping you on the straight and narrow, throwing a lasso around tail-happy antics. 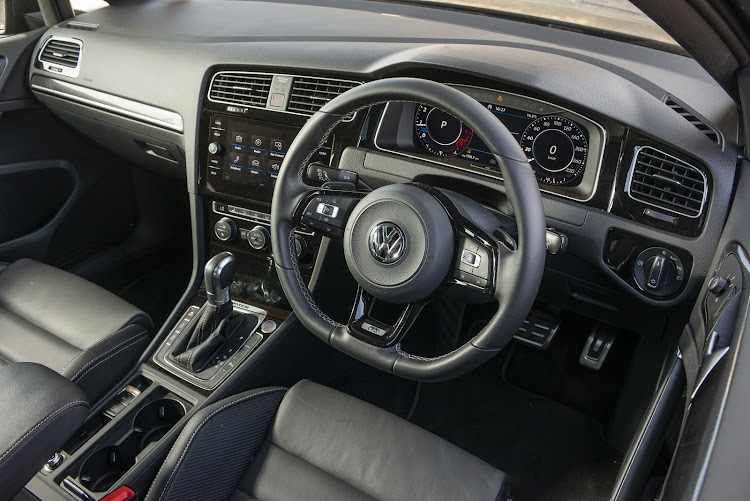 The familiar innards of the Golf R.
Image: Waldo Swiegers

That was not the case with the R, which was slower around the gymkhana (41.2 seconds) but of higher rank in the smiles-per-metre metric. The brand uses the term 4MOTION to denote all-wheel drive capabilities and like the car from Munich, this too is bestowed with an electronic system that emulates the virtues of a limited-slip differential. Lower to the ground as well, of course, with a 122mm clearance.

Its drifting abilities were so entertaining that a few extra outings were imperative, once the stopwatch challenges had ended. Plot-hole: could it have done the circuit more expediently with a more judicious throttle application? Possibly, but the urge to stab the loud pedal and provoke oscillation was too overwhelming to resist. Imagine that.

A side-by-side in which a BMW emerged as the animal that was less fun to drive. That aside, the factor that will sway you in favour of the more conventional car here is the price. These days the Golf R has a base outlay of about R676,500, while the M35i will set you back R815,172.

● Tune into IGNITION GT on DStv channel 189 between August 10 to 16 to see our dust-raising, drag-stripping activities.

Lamborghini, Bugatti and Koenigsegg among 25 supercars confiscated from African playboy to go on auction
Motoring
1 year ago

Mazda delivers again on that zoom