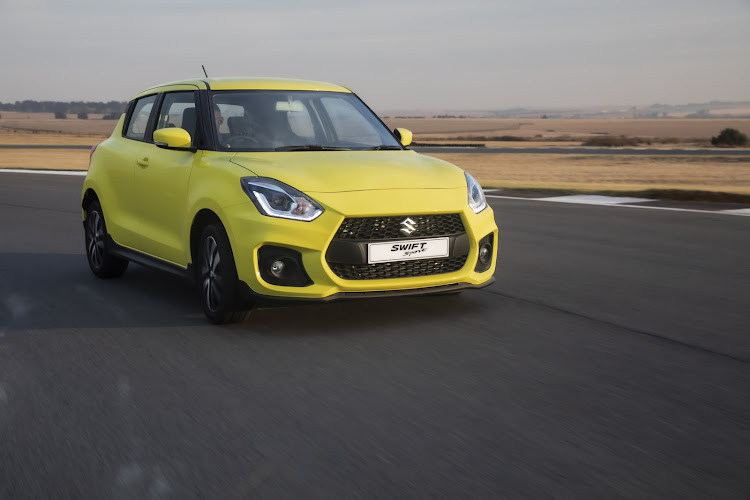 I recently saw a viral video of a Jack Russell dog chasing an elephant at a game lodge. The spirit and attitude of the fearless little mutt reminded me of the new third-generation Suzuki Swift Sport.

The move to a Boosterjet 1.4l turbo engine has awakened a real fire in Suzuki’s little hatch and there’s a lot of fight rolled up into this little dog. The 103kW output is only 3kW more than the normally-aspirated 1.6 engine of the previous Swift Sport, but a torque boost from 160Nm to 230Nm has given the little dawg much more bite.

At a flyweight 970kg the new Swift Sport is also 90kg lighter than its predecessor, giving it an improved power-to-weight ratio which plays a major role in its brisk and scurrying nature.

This is a mini hatch with hair on its chest. The little Boosterjet turbo engine is an ebullient thing  and comes on song without any noticeable lag, especially in six-speed manual form as tested here (the car is also available as a six-speed automatic).

With its claimed 0-100km/h in eight seconds it won’t challenge any GTI-badged cars for outright sprinting honours, but the Swift Sport lives up to its name with a spirited and light-footed nature that makes it an enjoyable drive. Slick gearshifts make it easy to extract the performance, although the engine’s quite torquey and doesn’t necessarily need to be kept bubbling at high revs. This low-rpm liveliness no doubt contributed to the car averaging just 6.8l/100km — a frugal figure given the performance. 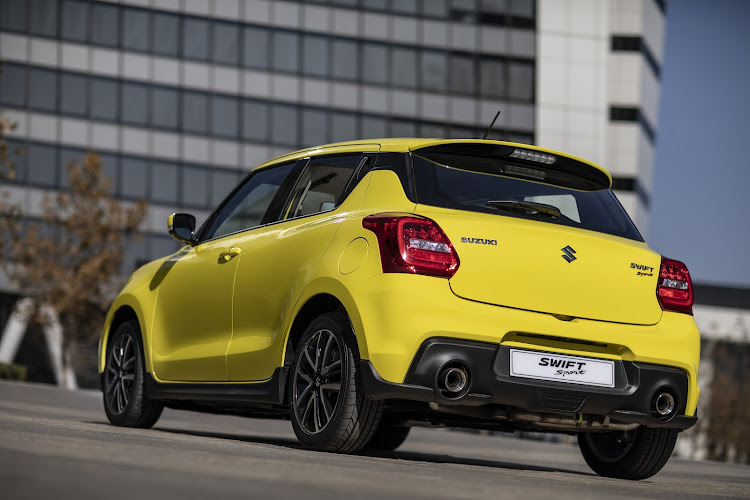 Suzuki’s little firecracker is slick in the corners too, scurrying through tight turns with a neat, pinned-down nature and speed-sensitive steering that has a decent, not-too-light feel. The suspension’s firmer and has thicker anti-roll bars than the regular Swift, while the brakes are also uprated.

It’s a rewarding 'lil car to drive briskly, and any overeagerness by the driver is quelled by stability control and ABS brakes — with six airbags to soften the blow if worse comes to worst. Despite its light weight the car doesn’t come across as tinny, and possesses a reasonably solid feel.

The agility doesn’t come at the cost of a pothole-hating ride, and there’s a good balance between glideability and handling. The suspension is fairly firm but the ride’s not especially choppy for such a short car; it’s a respectably comfortable commuter.

The Swift Sport visually declares itself top dog in the model range with its large honeycomb grille straddled by large cut-outs with integrated fog lights. The front lights are LEDs with daytime running lights, and the 16-inch diamond cut alloy wheels spice up the side view. The rear declares its sporty vibes with a pair of chromed exhaust pipes, LED tail lamps, a rear splitter and a roof spoiler.

Inside, the athletic theme is continued by means of chrome detailing, stainless steel sports pedals and red stitching on the seats and steering wheel. 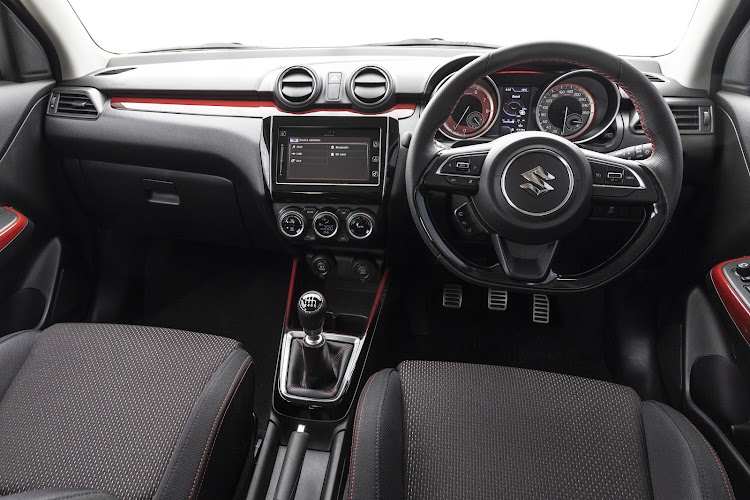 The dashboard plastics are hard but the finishes are neat, and it’s jazzed up by colourful dashboard inserts. The semi-bucket sports seats are comfy and offer good support in the corners.

As the flagship model in the line-up the Swift Sport is well specced, including an instrument panel with a multifunction LCD colour display that can be programmed to show turbo boost level and oil pressure, among other information.

Infotainment’s taken care of by an 18cm touchscreen system with all the requisite connectivity, including Android Auto and Apple CarPlay, plus a reversing camera. There’s automatic climate control instead of just regular aircon, and it does a swift job of getting the temperature to the desired level in the small cabin.

Family practicality isn’t the car’s focus but the rear seat is just about large enough for a pair of adults, who will sit snugly if not excessively cramped. The boot is very compact however, and houses a space-saver spare wheel.

The main focus is an entertaining drive and the Suzuki Swift Sport shoots the lights out here. There’s a lot of fighting spirit in this 'lil one; it’s a feelgood car with zippy pace, slick handling and great fuel economy to boot.

I tip it as a definite contender for Car of the Year.

REVIEW | The 2019 Suzuki Vitara is a surprisingly vivacious package