REVIEW | The 2019 Jeep Trackhawk is a street-brawler 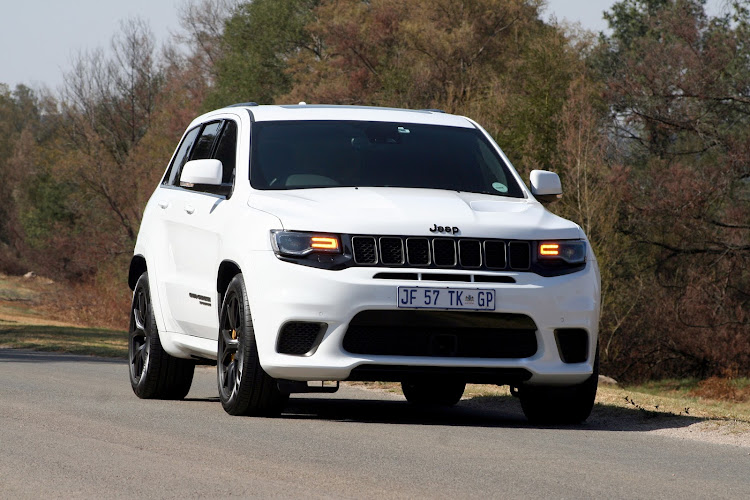 The Jeep Grand Cherokee Trackhawk is about as subtle as a tackle from Beast Mtawarira.

As you walk up to the vehicle the black 20-inch mag wheels, yellow Brembo brake calipers, and pumped-out wheel flares signal an unmistakably robust intent, as do the dual heat extractors in its sculpted hood (we don’t say “bonnet” when a vehicle’s this overtly American).

The Trackhawk looks like it’s been pumping iron at the gym, and all that’s missing is a “hell yeah” bumper sticker on its rump.

More drag-racing intent is signalled when you jab the red start button and the digital instrument panel lights up with the word “Supercharged” overlaid against a racetrack kerb. It sets the scene for a wild ride and the Trackhawk doesn’t disappoint; all that visual strutting is backed up by an SUV that can do some real bench pressing.

This American car employs the time-honoured ain’t-no-replacement-for-displacement rule with its 6.2l of cubic capacity, but straps on a supercharger for good measure.

The result is 522kW and 875Nm of thrust which makes it the planet’s most powerful production SUV, or enough to make Greta Thunberg very angry.

This so-called “hellcat” engine features upgraded driveline components,  including a strengthened transfer case and driveshaft, to handle the extra muscle.

What is all such power for if not to set records? The Trackhawk blazed a hot trail on Russian ice when it set the record for world’s fastest SUV on ice at the Baikal Ice Motor Sports Festival in Russia earlier this year. It set an average speed of 257km/h over the 1km course, briefly touching 280km/h.

Paired with an eight-speed transmission and Quadra-Track all-wheel drive with an electronic limited-slip diff, it’s claimed to haul this 2.5 ton Jeep from 0-100km/h in just 3.5 seconds with the aid of launch control, and onto a 290km/h top speed.

Such numbers are easy to believe by the g-forces that unleash when you fire up that big V8 and thrust the throttle. One can scarcely believe that such a hefalump can shoot forward with such instant vigour, pressing you into your seat with delightful violence.

Things become distinctly more livid in its Sport and Track modes (the latter disabling the traction control, if you dare) as the big, brash SUV shoots towards the horizon like a pack of Springbok forwards. 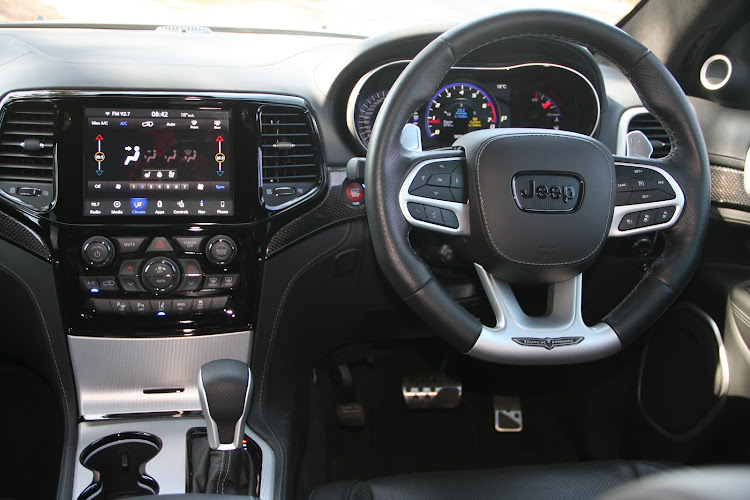 This Jeep is as much about the sound as the speed. Rev up that big V8 and it roars like an angry T-Rex, overlaid by a hissing supercharger as a seething chorus line. It’s a rowdy sound that conjures scenes of window shutters closing and children being ushered off streets as it rides into town. It will elicit scowls or smiles from your neighbours, depending on their level of petrol-headedness.

All this hooliganistic entertainment comes at a price: our test vehicle quaffed about 23l/100km, and even with a restrained right foot I battled to get it below 20l.

Creating the planet’s most powerful SUV included fitting it with high-performance Brembo brakes that have the largest front brakes yet offered on a Jeep. They arrest velocity briskly indeed, though we didn’t get a chance to drive this beast on a track — as its name invites you to — and test how fade-resistant they are in this unforgiving arena.

The Trackhawk sits 2.5cm lower to the road than a regular Grand Cherokee, as much for a menacingly crouching visual bravado as for handling improvements.

I won’t claim any car-like roadholding has been magically conjured here, but for a big hulk the Trackhawk surges through bends with a fair amount of proficiency, and the body roll isn’t too pronounced.

The ride is predictably firm but without being uncomfortably spine-jarring, and the grip is impressive too. Thanks to the all-wheel drive and limited-slip diff, assisted by traction control, this isn’t a vehicle you have to carefully pussyfoot about. You can experience the visceral joy of booting the throttle without smoking those 295mm Pirelli Scorpio Verde all-season tyres.

The instrument panel wakes up with a promise of fast-paced action. The car doesn’t disappoint. Picture: DENIS DROPPA

The R2.2m pricetag comes with a truckload of toys including a 21cm touchscreen infotainment system with Trackhawk-exclusive Performance Pages, a dual-screen Blu-ray rear seat entertainment system, and an 825-watt Harman Kardon audio system with 19 speakers including two subwoofers.

Creating a racing vibe in the cabin are dark Ruby Red seabelts, a flat-bottomed three-spoke steering wheel, and Nappa leather seats embroidered with the Trackhawk logo, complete with carbon-fibre and metal accents.

Big and burly, this is the bad-tempered bully of sports SUVs. It is loud, lewd, and guzzles fuel like an ocean tanker. There are other muscle vehicles in this league — from Porsche, Maserati, Range Rover, BMW et al — but they all lack the raw aggression of this all-American brawler. The vehicle that comes closest in rebellious and not-entirely-sane character is the Mercedes-AMG G63.

Eclipsing the BMW M2 Competition in terms of hierarchy, the new BMW M2 CS (that stands for ClubSport in case you were wondering) is a seriously tasty ...
Motoring
1 year ago