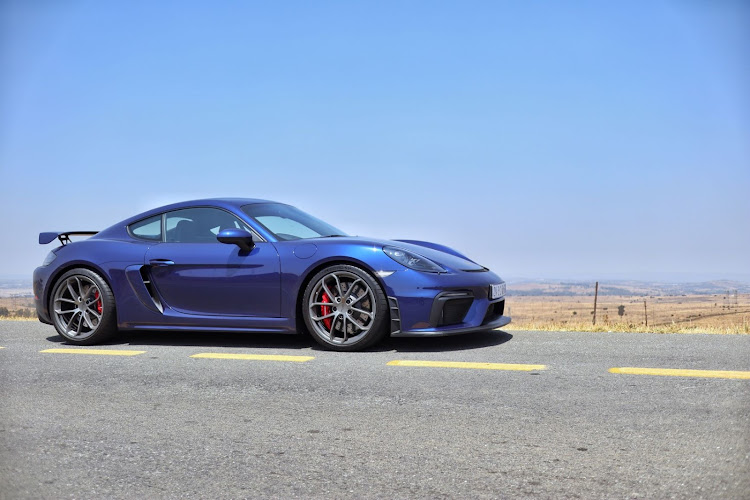 Ah, yes, the Cayman GT4. I’ve got some history with this car. You see, back in 2015 I drove the first iteration of this mid-engined Porsche around what is perhaps the most iconic racetrack in the world today — the Circuit de la Sarthe that plays host to the annual 24-Hours of Le Mans.

Obviously not the full 13.62km track (that would require closing public roads) but rather the smaller 4.1km Bugatti Circuit that’s long been a permanent fixture on the MotoGP calendar and incorporates some of the actual endurance race's best-known features, namely the pit straight, Dunlop Curve and Dunlop Chicane.

And despite getting to experience these motorsport institutions behind the wheel of a 991.1 GT3 RS, I do remember being more enamoured with the smaller and more affordable Cayman GT4 thanks to its friendlier demeanour. Sure, the magnesium-roofed 911 was faster and more dramatic thanks to its 8,800rpm redline but it demanded an extra level of respect and attention. This was a car that would not easily tolerate driver error.

The Cayman in comparison was an absolute delight to throw around the French asphalt with its power, braking and adhesion balanced out in near perfection proportion. All of which meant I could comfortably push its limits without fear or trepidation. Flat out in fourth through the gnarly Dunlop Curve? In the GT4 nothing felt more natural.

It goes without saying that I wanted one. Bad. Especially as the GT4 was speculated, back in 2015, to be the last naturally aspirated GT car Porsche was building with a manual gearbox. Not to mention the last Cayman fitted with a six-cylinder boxer engine.

Fortunately none of these rumours proved correct with the subsequent 991.2 GT3 offering a do-it-yourself transmission and the current generation Cayman making a welcome return to flat-six power and, ultimately, past glory with the rekindling of the GT4 badge.

Yep, at the end of 2019 Porsche announced to the world that its “junior” GT car was making a comeback and I’ve at long last — thanks to the inertia of the ongoing Covid-19 pandemic — had a chance to sample it. 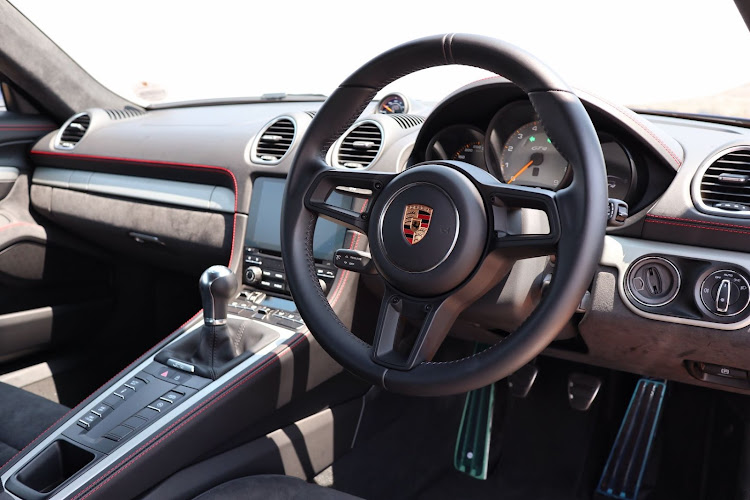 So, five years after the original dropped, how does the new Porsche 718 Cayman GT4 stack up? Well from an aesthetic point of view they’re both achingly similar. In fact I’d actually hazard a guess that if you weren’t familiar with the Porsche brand you’d probably struggle to discern the old car from the new one.

There is some evidence of evolution, however, particularly at the sharp end where a more menacing front bumper and pointier headlights give the new GT4 an angrier visage. While the stubby rear deck still wears a large manually adjustable spoiler, you’ll notice that the two centrally mounted exhaust tailpipes have now been moved further apart, which, if you ask me, is a shame because the old arrangement looked a little less fussy.

Wheel-wise you get a beautiful set of 20-inch (front and rear) alloys that again bear a striking resemblance to the ones that did duty on the original.

But as alike as they may look across the afternoon malaise of a showroom floor, the shape of the 718 Cayman GT4 does harbour some serious unseen benefits over its predecessor. Take a drive on over to your nearest wind tunnel, crunch the data and you’ll learn that the new car offers 50% more down force. That’s a big deal. Especially when you take it to the racetrack as many owners no doubt will do.

Overall build quality has been improved and everything feels just that little bit more polished.

Inside the cabin you’ll notice that Porsche has again kept things evolutionary rather than revolutionary with a cockpit that stirs up a great big pot of déjà vu. Overall build quality has been improved and everything feels just that little bit more polished.

There’s also the latest Porsche Communication Manager (PCM) infotainment system that offers Apple CarPlay integration for instant access to music, podcasts and must-have driving Apps such as Waze. Unfortunately this is a R6,810 extra, which seems a bit cheeky in this day and age. If Suzuki can offer it standard in an S-Presso surely Porsche can do the same in a Cayman?

What does come standard, however, is a phenomenal driving position that can, through generous steering wheel reach and rake adjustment, be tailored to fit any body type. Though you can upgrade to hard-core bucket seats, I’ve got to say that the two-way adjustable sports seats that come with the car are an absolute dream: supportive enough under high lateral G-force loads and endowed with enough padding to keep you comfy on long drives, they’re all most drivers will ever need.

Importantly they also contribute towards the 718 Cayman GT4’s impressive livability. For as laser-focused as this Porsche may be it still copes admirably with day to day drudgery. I was especially taken with the ride that, provided you leave that sport button alone, does a fairly good job at dealing with the city’s many asphalt imperfections with only the roughest of surfaces causing any real discomfort. 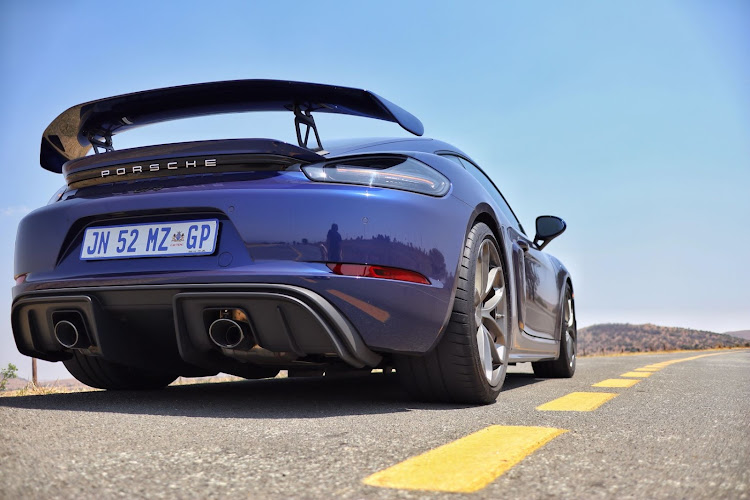 Complemented by decent all-round visibility, a good sound system and dual-zone climate control, you could get away with using this flagship 718 as an everyday driver. In fact the only issue you’d have would be with the front spoiler scraping on aggressive speed humps and inclines. Usually you can get around this with fitting Porsche’s optional front axle lift system but unfortunately it isn’t available on the GT4.

Anyway, I digress. It’s time to touch on this machine’s performance, which, as you‘d expect, is pretty darn special to say the least. In a world where turbocharged engines reign supreme there’s something refreshing about piloting a sports car fitted with a highly tuned naturally aspirated motor. And that’s exactly what you get here.

Essentially a bored, stroked and strengthened version of the power plant used in the current 911 Carrera, this 4.0-litre screamer requires high revs to get the most out of it. Docile at low revs it really comes alive after the tachometer needle hits the 5,000rpm mark and that exhaust starts broadcasting a ghoulish bellow that makes your skin prickle and adrenalin gland contract — especially when you close in on that 8,000rpm redline.

This Porsche offers a level of visceral connection and involvement that’s becoming increasingly harder to come by in the modern performance car arena.

Driving the 718 Cayman GT4 reminds you that going fast is an actual process: a task that requires a committed right foot and the correct gear to get near those claimed performance figures. It is a car that requires something of a mental reset and once your system reboots, now cleansed from all those slothful habits learnt from the industry’s mass adoption of forced-induction, there’s simply no denying that this Porsche offers a level of visceral connection and involvement that’s becoming increasingly harder to come by in the modern performance car arena.

Though you can now fit the 718 Cayman GT4 with a PDK transmission my test unit came equipped with a six-speed manual that will keep even the most hard-boiled of purists happy. While the throws are short and positive, the clutch is deliciously light with a firm and consistently defined bite point that makes for smooth cog-swapping at all speeds.

While the pedals may be perfectly positioned for heel-and-toe work I found that the standard “Auto Blip” rev matching function does an excellent job at keeping downshifts in check. And, hey, if you do feel like kicking it old school then you can turn it off with a stab of a button. A delight to use, this gearbox is still endowed with some of the lengthiest ratios you’ll likely ever sample in modern production vehicle.

How long? Well you’re looking at a whisker over 80km/h in first, almost 140km/h in second and an utterly insane 195km/h in third. At times this can be frustrating because, as mentioned before, you really need to be in the upper throws of the rev range to squeeze the best out of the 718 Cayman GT4. 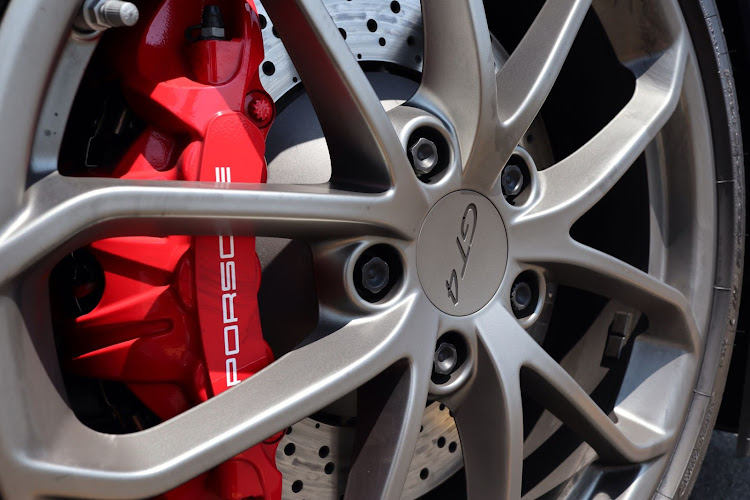 As such you can often find yourself riding a compromise between two cogs — especially when traversing twisty, lower-speed tracts of tarmac. For this reason alone it may well be worth trying out the new PDK version as it benefits from an extra gear and a revised spread of ratios.

They say you should save the best for last and in the case of this review that honour falls with the way this Porsche handles. As was very much the case with its predecessor, the most impressive thing about the 718 Cayman GT4 is the way it scythes through corners courtesy its specially developed GT chassis.

A standard 718 Cayman is already no slouch through the curvy bits but here the basic recipe is enriched with a front axle lifted from the 991.2 GT3, Porsche Active Suspension Management (PASM) with a 30mm drop, Porsche Torque Vectoring (PTV) and a proper mechanical rear differential lock. Keeping everything hooked up and planted to terra firma is a set of ultra-sticky Michelin Pilot Sport Cup 2 tyres.

All of this culminates in a sportster that allows you to attack the bends with as much gusto as you can humanly muster. And even then you can almost hear it mumbling under its breath, “Seriously, is that all you’ve got kid? Is that the best you can do?”

So you try harder, dig deeper into those almost limitless mechanical grip reserves and still it feels like you’re not really doing the 718 Cayman GT4 any real justice. Indeed, the limits are so high here that you need a few hours on a racetrack like Le Mans’ Bugatti Circuit to truly enjoy this Porsche to its fullest. That said, even driven at seven tenths around the empty country roads of Buffelspoort it’s difficult to not be won over by this car’s telepathic composure.

Whether coursing up from the chassis or transmitting through the electric power steering system (Porsche seems to have this spot on now), the constant flow of feedback makes this one of the most confidence inspiring sports cars you’ll ever pilot. It’s fantastically neutral too, exhibiting none of those unnerving sting-in-the-tail characteristics to cloud the back of your mind as you go about your business.

In closing the Porsche 718 Cayman GT4 is a proper class act: an unfiltered thrill-machine that subtly improves upon all the traits that made its predecessor such a celebrated success. Priced at just over R1.8 million it’s arguably not quite the steal it once used to be but once you factor in that you’re getting most of the Porsche GT car experience — especially from a handling point of view — for considerably less outlay than a 911 GT3 (I’d expect the new one to be north of R3 million) then you’ve got to admit that the GT4 is still something of a comparative bargain.

Suffice to say I want one more than ever before.

Merc’s new charger is SA’s hot-hatch king, and also the first to exceed the R1m mark
Motoring
10 months ago

Few things scream obnoxious louder than a matte blue BMW M8 Competition coupé. In the hours the vehicle was entrusted to me, the extent of the ...
Motoring
10 months ago

REVIEW | The Porsche 911 GT3 RS is an unforgettable screamer

Some cars require a more profound level of scrutiny and judgment. Of course, we at this publication approach all automotive subjects with the same ...
Motoring
9 months ago