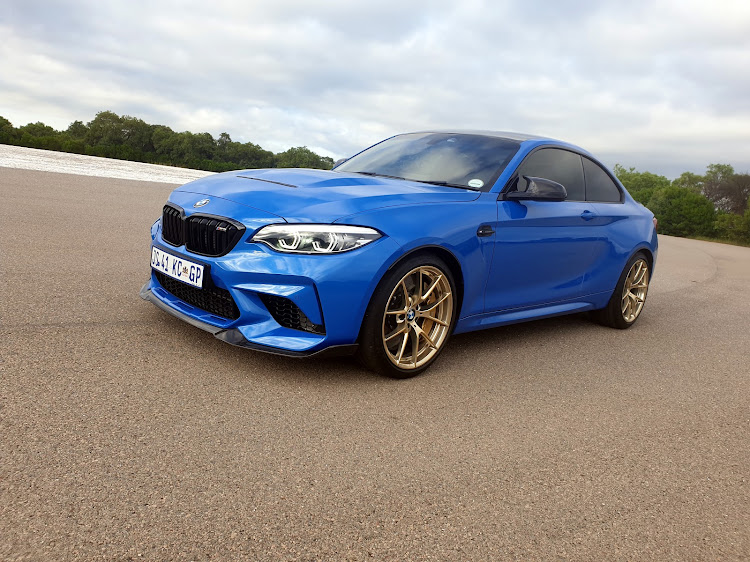 BMW’s M Division turned the 2 Series into an athlete with a snorting engine and an aggressive attitude.
Image: Denis Droppa

Picture, if you will, a group of friends around a braai in a few decades’ time when car talk will be about the battery life and range of autonomous electric vehicles.

Some of the older beer-clutchers in our imagined group (if fermented grain is still a pleasure to be enjoyed in this faraway scenario) might throw into the conversation nuggets from the golden age of fuel-guzzling “character” cars.

To eye-rolls from the younger contingent who would have never experienced internal combustion engines, these slightly soused, grizzled old petrolheads may go misty-eyed when recounting tales of CO2-spewing sports machines that were at times impractical, uncomfortable, loud and politically incorrect. But while they were busy killing the planet, man, did they make you feel alive.

One of the vehicles in awkward grandad’s recollections might very well be the BMW M2 CS. Not because it is anything like a Ferrari or a Lamborghini or a Koenigsegg in the pantheon of fire-spitting supercars, but because it is a car transformed from humble origins into what may well become a sports classic. 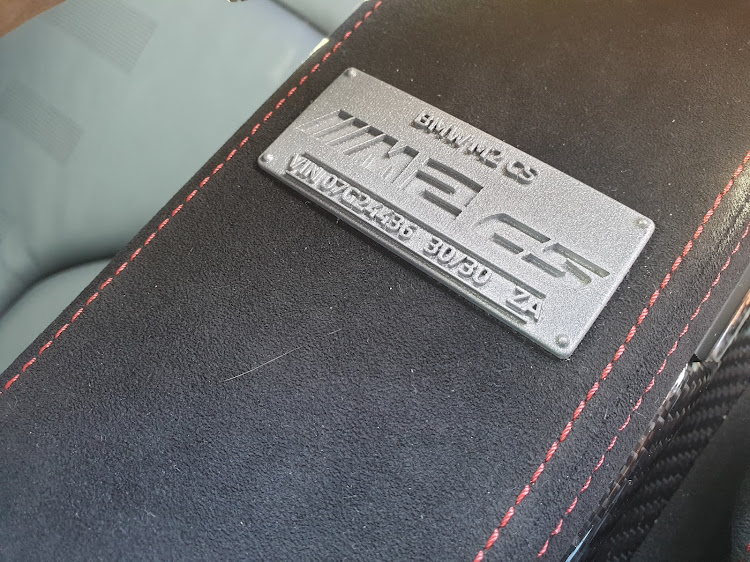 The numbered metal badge between the front seats identifies each M2 CS as part of a limited-edition series.
Image: Denis Droppa

The 2 Series was conceived as a smaller, cheaper BMW for the masses, but in the same spirit that begat the high-performance Volkswagen Golf GTI from a humble people’s car back in the day, BMW’s M Division turned the 2 Series into an athlete with a snorting engine and an aggressive attitude.

With high-performance Beemers like the M3 and M5 getting larger and heavier, the M2 has become something of a cult car for offering sporting M vibes in a smaller package, recalling the spirit of earlier generation M3s.

Having been available until now in an M2 Competition model, BMW’s compact projectile was recently launched in an even more rarefied version bearing the CS (Club Sport) badge reserved for the most sporting BMWs.

Apart from having more muscle than the run-of-the-mill M2 Competition, the Club Sport’s collectibility is heightened by there being only 30 units of the car available in SA. All were snapped up by buyers in a recent auction, with rumours of some selling for well beyond the official R1.6m list price.

For lightness and livened-up looks the M2 CS is liberally adorned with carbon fibre-reinforced plastic. The CFRP bonnet is painted in body colour but the roof, wing mirrors, front splitter, boot spoiler lip and rear diffuser are all bare carbon fibre. 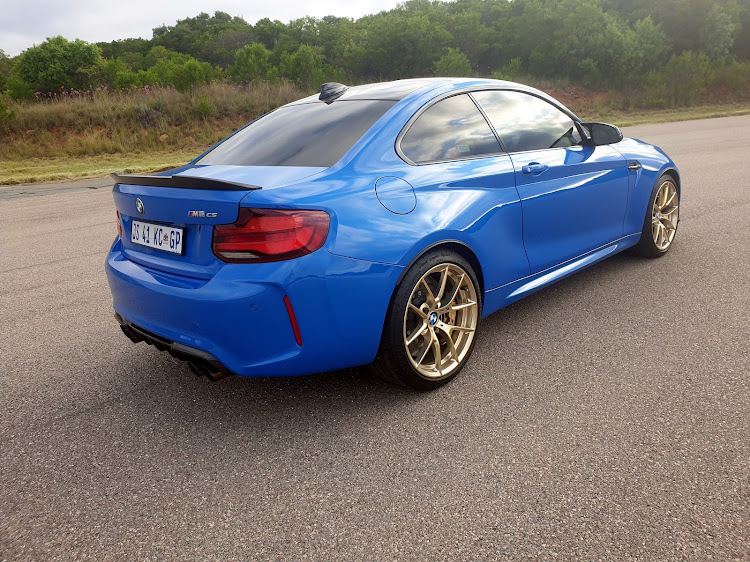 The 30 units in SA were sold on auction, with rumours of some selling for well beyond the official R1.6m list price.
Image: Denis Droppa

The cabin is also more flashy than BMW’s usually sober interiors, dressed up with carbon fibre and alcantara, along with motorsport-inspired bucket seats. A numbered metal badge between the front seats identifies each car as part of the limited-edition series.

The aforementioned muscle boost sees an extra 29kW being extracted from the twin-turbo 3.0l six-cylinder petrol turbo engine to bring it to 331kW, though peak torque stays the same at 550Nm.

It i dispatched solely to the rear wheels, unlike other M cars which get the relative civility of four-paw traction.

The first time I thrust the throttle in anger on cold tyres, I understood what makes this junior M car probably the most playful of the lot. Even with all its traction aids active, the M2 CS expressed its eagerness with a lively tail flick in the first two gears.

With the tyres warm and the launch control engaged, our high-altitude test at the Gerotek test track near Pretoria delivered a 0-100km/h sprint in four seconds flat in the automatic model, exactly as promised by the factory. And half a second quicker than the M2 Competition.

Buyers who choose the six speed manual version can expect a 4.2 sec 0-100km/h time, and top speed is 280km/h in both versions. 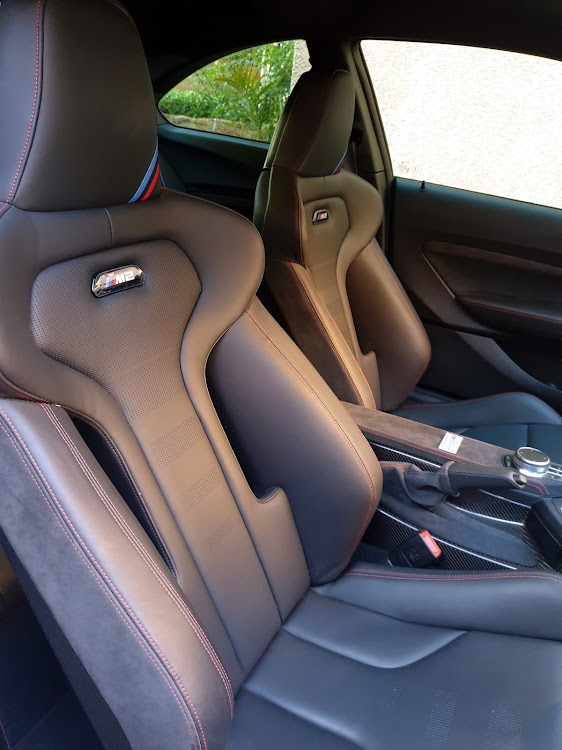 The M2 CS is a hard ride even in the softest of its suspension settings, and positively teeth-jarring in its stiffest mode.
Image: Denis Droppa

Together with stability control, road-hugging ability is provided by an electronic active M Differential at the rear wheels, and a few laps around Gerotek’s handling course confirmed this Beemer’s driver-satisfaction credentials. It has a quick turn in, steering that loads up nicely, and impressive traction, but get too frisky with it and it can turn into a leery tail-slider that calls for above average driving skills if you have the cojones to disable the stability control.

Civility? Bah humbug. The M2 CS is loud and a little lewd, and makes few concessions to ride comfort. It’s a hard ride even in the softest of its suspension settings, and positively teeth-jarring in its stiffest mode.

The throttle and steering action can be softened to make the car feel a little less edgy when pottering about the suburbs, but even in these dialled-down modes it feels like an angry Doberman yanking at the leash, like a thing that will be happiest at maximum intensity.

I reckon it is a future classic.

The junior M car it may be, but there’s no sense of the M2 CS being the runt of the litter in terms of its performance or its ability to make you feel alive.

At least that’s what I’ll probably say around the braai in a few decades’ time.

The Ford Ranger XL Sport could represent something more than just another flavour for this popular double-cab bakkie. It’s one of three derivatives ...
Motoring
3 weeks ago