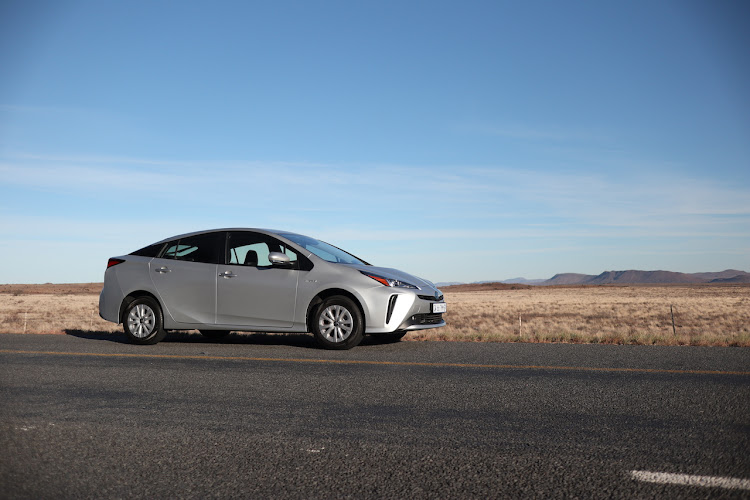 It's been well over a week since I was handed the key to the Toyota Prius. And in this time I've already done a fair amount of travelling in it. During the first couple of days I did quite a bit of urban commuting in and around Johannesburg including a few trips out to Zwartkops Raceway. Now it's in these conditions that the Prius excels and where you can make the most of its electric-only propulsion. Stop-start traffic and treacly highways are normally a nightmare in other cars but in this Toyota you can pootle along using only the electric motor. Not only is this very relaxing but it saves you a significant amount of fuel. Indeed, by Saturday the on-board computer had settled down to a rock-solid 3.6l/100km.

However, when the sun edged its way up over the horizon on Sunday morning it was time to see how this hybrid Toyota would cope with the long trek down to the little town of Montagu in the Western Cape. After topping up the tank at the Grasmere 1 Stop I stuck the Prius into Eco Mode (Normal and Power are your other two options) and got down to business. Adaptive cruise control is standard on the Prius but I chose to control throttle inputs the good old fashioned way as I find it allows for better fuel economy figures. As I don't have the patience for hyper-miling I aimed to stay at about the 120km/h mark. 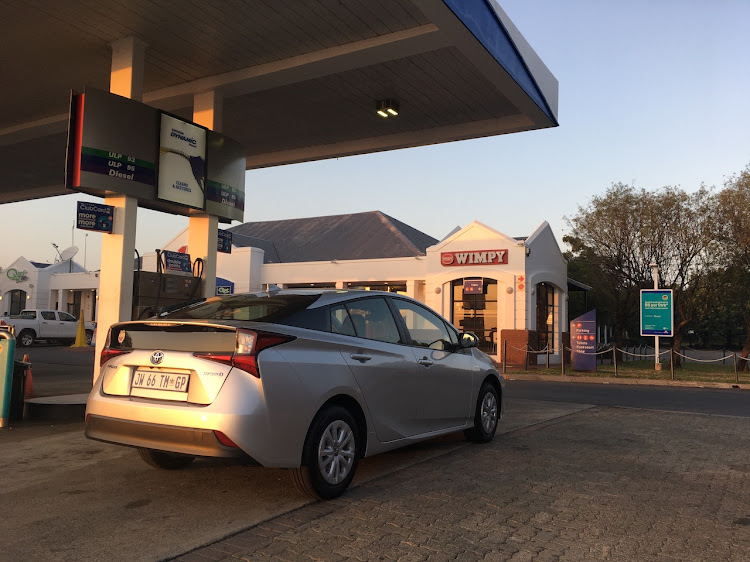 The journey began at the Grasmere 1 Stop where the author topped up the tank with 16.29 litres of 95.
Image: Thomas Falkiner

As the kilometres rolled by a couple of things started to become evident. The first being that you really do need to concentrate on the car's 'Eco Accelerator Guidance' guidance display set in the instrument cluster. Basically a real time visual interpretation of your throttle input, you want to aim to keep it slap bang in the middle of the bar. Doing so will make sure that your instantaneous fuel consumption remains stable and consistent.

Then there's the small issue of momentum. Momentum is a good friend of the Prius and as such you want to try to make the most of every downhill gradient so that you use less fuel going up the other side. Thing is on the N1 highway there are trucks and trucks don't give a damn about your momentum. So you ideally need to get all your truck-hopping done either down a hill of halfway up one — getting stuck behind a pantechnicon near the top of a blind rise is a sure way to extinguish your impetus and ruin your consumption. 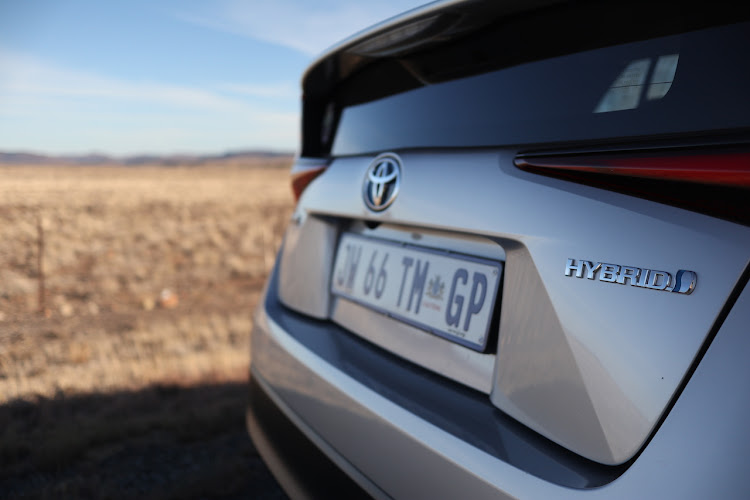 Use EV mode to crawl through small towns and improve your gas mileage.
Image: Thomas Falkiner

Another thing you learn in the Prius is to look ahead and always leave a generous gap between yourself and the car ahead so that if it suddenly brakes you have time to respond in a smooth manner that can maximise the effect of the car's regenerative braking system.

Other than that there's not much more to it. Sure, you can go to extremes by limiting your cruising speed to 80km/h and not using any of the car's ancillaries (audio system, HVAC and heated seats) but even I'm not eccentric enough (yet) to sink to those depths. And honestly, in a Prius, you don't really need to in order to achieve wallet-friendly mileage. For despite probably weighing close on 1,500kg with myself in the car and all my luggage, the combination of a super-low drag coefficient (0.24Cd) with friction-repelling Dunlop Enasave EC300+ tyres saw me fluctuate between an indicated 4.2 and 4.4l/100km depending on the truck situation — overtaking would see it spike a bit. 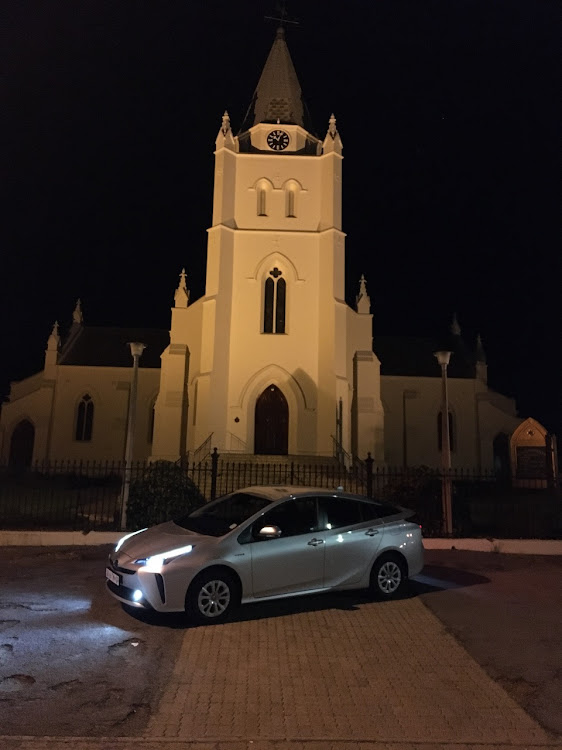 This was enough for the 43-litre tank to take me all the way from Grasmere to the not-so-picturesque town of Beaufort West. OK, I lie — I took on five litres at Three Sisters but only because the indicated range remaining was a little too close for comfort (+-5km difference). I probably would have made it to Beaufort West just fine but I didn't want to risk something going wrong and being stranded on the side of the N1 out of gas. That would have sucked.

Speaking of small towns I found that every single one of them could be traversed on pure electric power only. You just dab the EV button on the centre console and cruise through them effortlessly at the given speed limit — a real boon for your overall fuel consumption.

For most of the trip I had managed to keep my average speed above the 100km/h mark but by the time I arrived at the R318 that forks off the N1 towards Montagu the sun had long gone. And despite the Prius being equipped with excellent LED headlights this is not a road that you speed on after dark because the amount of seemingly suicidal wildlife that lurks on its shoulders. Porcupines. Buck. Owls. Rabbits the size of small dogs that dart, duck and dive. So for the last 80km or so I cruised along at a pedestrian 70km/h — and even then I had a few scarily close encounters with those aforementioned bunnies.

When I finally got to Montagu I parked in front of the town's church to snap a photo and crunch the final figures. According to the Prius' on-board computer I had travelled 1,270.6 kilometres at an average speed of 97km/h. 11% of the journey had been completed under EV power alone and my fuel consumption sat at 4.2l/100km. While this is 0.5l/100km more than what Toyota claims it's still a respectable figure for a car that, let's face it, works its best inside the city. As mentioned before, you could get this down by adopting a more conservative driving style, but on a 12-hour plus journey this will test your patience. 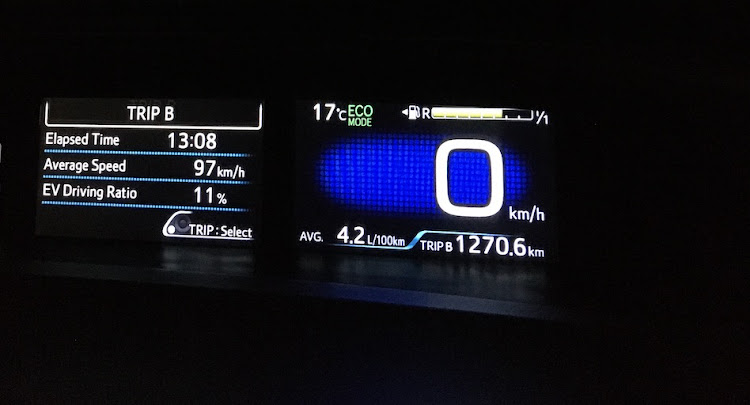 Bugs killed: Too many to count

Rabbit near misses: One

The Toyota Prius: love it or loathe it, this quirky looking hybrid has been creeping the world’s highways and byways for nearly 25 years. Now well ...
Motoring
4 weeks ago

Two things weigh heavy in the back of my mind whenever I get a high-powered sports car to drive. The first is the frighteningly real threat of jail ...
Motoring
3 weeks ago

My second car in my earlier years was a Toyota Conquest. It was pimped-up with three-star rims, a Pioneer stereo with a detachable face and a ...
Motoring
3 weeks ago