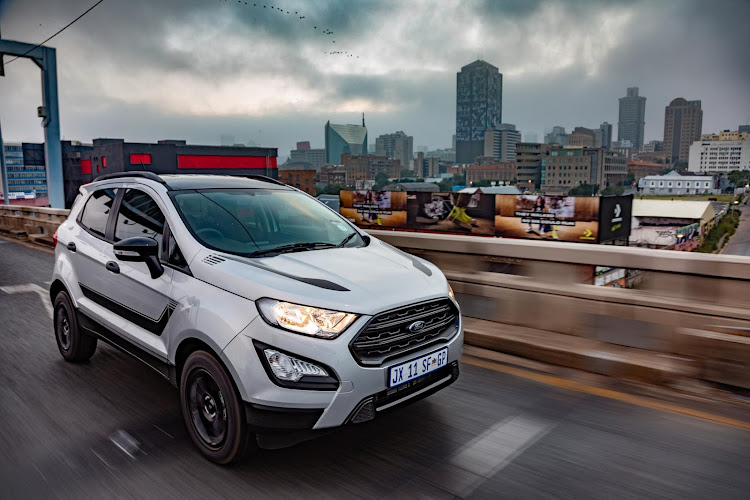 Ford seems to have become the king of “special” editions.

Instead of bringing us their latest-generation offerings like the new Focus, the ST version of the Fiesta or the funky-looking Puma, it insists on sprucing up stale offerings with fresh stickers and painted trim.

Even when it comes to their Ranger mainstay, it's hard to keep track (trak?) of the frequency with which they release limited run versions sporting minor visual add-ons and little else.

In April this year Ford released the EcoSport Black. Last week we had the opportunity to get acquainted with the model.

Of course, we are no stranger to the EcoSport, a pioneer of the category in which these days virtually every automaker worth mentioning has a contender. 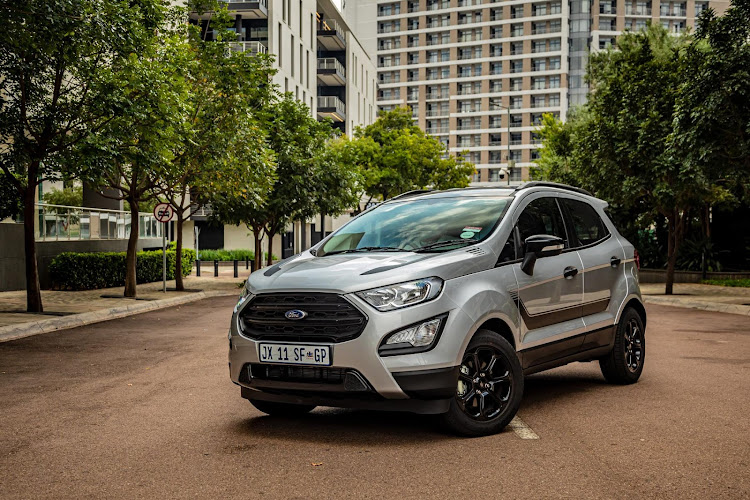 It first landed on our shores in 2013 and was an overnight hit, capturing the market with an enviable grip that peers sought to loosen.

A 2018 refresh brought significant styling revisions and a cabin that certainly addressed quality criticisms of before.

So what does the 2021 EcoSport Black offer you? Well, as the name suggests (and in Ford's words): “Several dark-hued feature enhancements that give it a more distinctive and dynamic appearance.”

OK, you have to hand it to them. The darkened-up theme works pretty nicely. At the front, the grille and skid plate have been treated to a spray job. Hood decals look like the battle paint on a Maori warrior's face. Black striping down the sides complement the addition of 16-inch alloy wheels (in black obviously). While a black spare wheel cover rounds it all off at the tailgate. 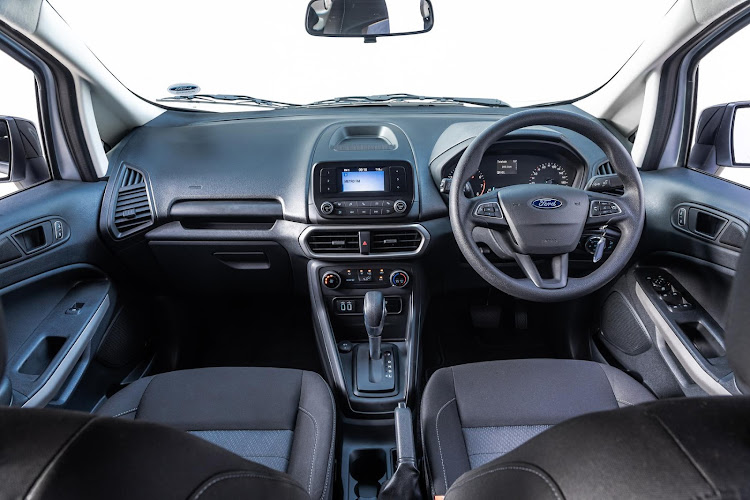 The cabin is a sea of dark plastics and fabrics.
Image: Supplied

You can pick from five different colours: Diamond White, Moondust Silver, Smoke, Blue Lightning and Canyon Ridge. We took our Moondust Silver test unit out of the smog of Johannesburg and into the freshness of the Muldersdrift countryside, for a short working holiday at Kloofzicht Lodge.

Yes, the car looks at home in the urban environment, but driving through those Cradle roads, flanked by cheerful cyclists and acres of grassland, the Ford seemed especially comfortable.

This kind of sedate, leisurely cruising allowed us to ignore how strained the three-cylinder petrol tends to sound when you kick down. But ask for steady, gentle progress and the 91kW and 151Nm motor, in tandem with the self-shifting six-speed, complies fairly well. Our consumption figure after nearly 300km of driving was 8.4l/100km. 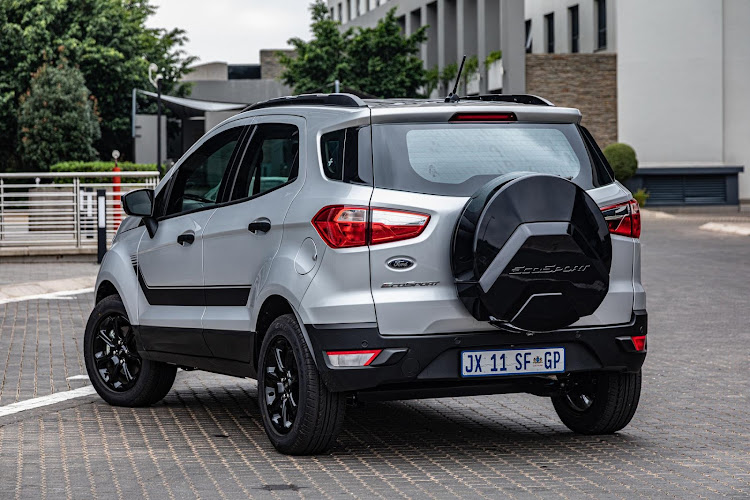 Among the merits of the EcoSport is its sturdiness. We learnt last year on a similar trip, tailing a game drive vehicle into the dusty ravines of the Drakensberg region, that it does not throw in the towel even if it lacks all-wheel drive. That robust, mountain goat-like character shone through yet again, as the Ford hopped and sauntered over shoddy surfaces.

Its plastic mouldings were put to use when a short wooden pole, standing out of the ground, went undetected by the rear park-distance control. Despite hearing the thwack, there was not so much as a scuff to indicate what had happened.

Being the Ambiente model, the interior is quite basic. It had the Black treatment by default: the cabin is really a sea of dark plastics and fabrics.

Surfaces are hard to touch, from the scratchy, urethane steering wheel to the hard door panels. Far from plush, but will definitely withstand several years of use and abuse.

The important amenities are there, including the Ford SYNC interface with voice control and a 4.2-inch screen. For some reason the Bluetooth disliked both my smartphones and frequently requested that I remove my device from the system and re-pair.

The Ford EcoSport Black is decent overall. But while newer, more modern, more refined and even better equipped contenders are joining the fray, sticker jobs will hold this ageing segment pioneer in good stead for only so long...

With the SUV and crossover craze in full swing, carmakers are bringing out new models to fill ever new niches. Sometimes these vehicles straddle ...
Motoring
7 months ago

SA consumers have shown little appetite for low-quality Chinese cars in spite of their bargain price tags, which saw firms such as Chana, Chery and ...
Motoring
7 months ago

There is still a strong case to be made for the sedan genre. Yes, customers might be migrating to the crossover and sport-utility vehicle formats for ...
Motoring
7 months ago