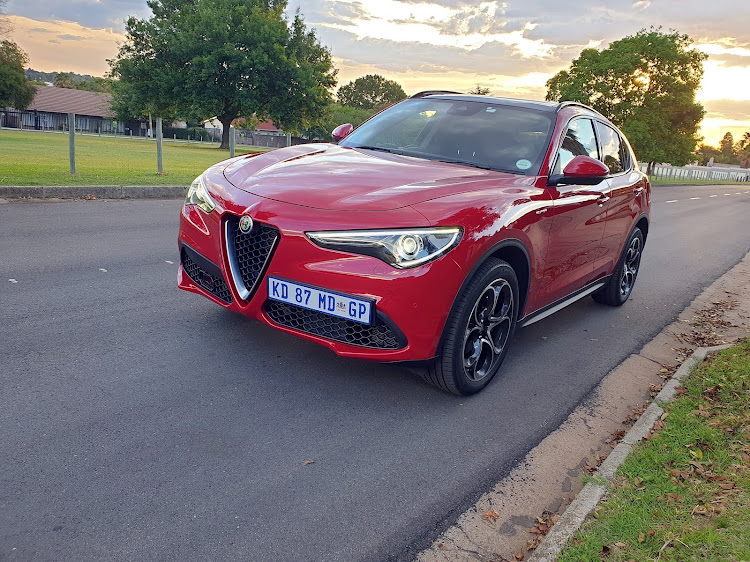 The Stelvio has better-than-average handling for an SUV, and quick steering. Picture: DENIS DROPPA

Named after a famous mountain pass in northern Italy with 48 hairpin bends, the Stelvio is the lightest mid-size SUV in its class thanks to its lightweight body structure and carbon fibre driveshaft, giving it pressed-down handling despite its elevated ground clearance.

Based on the Giulia sedan, the Stelvio has been refreshed for 2021 with improved infotainment and updated driver-assist features.

The cabin has been perked up with an updated Alfa Connect 3D Nav 8.8-inch touchscreen infotainment system with Apple CarPlay and Android Auto compatibility, but the digital fare is complemented by physical controls which makes it quicker to select functions like the climate control and audio system.

These features, along with many other luxuries, come standard in the highly-specced Alfa Stelvio, in contrast to other brands — particularly German ones — where many of the fancier features are expensive options.

The Alfa rolls out of the factory with standard fare that includes a wireless charging pad, electrically adjustable and heated front seats, active cruise control and a sunroof, to name a few.

As before, the Stelvio is offered in two petrol-turbo all-wheel drive versions: the 2.0T Super Q4 four-cylinder with outputs of 206kW and 400Nm, and the Quadrifoglio Q4 2.9l V6 kicking out a potent 375kW and 600Nm.

It lacks the headline-grabbing performance of its six-cylinder cousin, but the 2.0T Super has no shortage of pace for a driver who’s in a frisky mood. It bolts off the line with just a modicum of turbo lag, hits 100km/h in a respectable 5.7 seconds, and tops out at 230km/h — numbers that attest to a vehicle that never feels underendowed.

The eight-speed auto fires through gears with satisfying haste in the dynamic setting of the three-mode DNA (Dynamic, Natural and All-weather) system, which changes the throttle and steering responses from leisurely to sporting.

The test car’s fuel consumption of 11.5l was par for the course for the power on offer, but one thing the engine lacks is a sporting sound; it makes an anodyne noise.

With its double wishbone front suspension and multilink rear suspension, the Stelvio churns through turns with better-than-average handling for an SUV. It has quick steering too, which makes for an alert and pointy-feeling vehicle through the corners.

The Stelvio’s most likable driving characteristic is how it delivers in both the handling and ride quality stakes. Often one aspect is compromised in favour of the other, but this Alfa nails the sweet spot with a very comfortable ride, quite surprising given its low-profile 20-inch tyres. This makes it an SUV that wafts comfortably over scarred roads and can also undertake gravel adventures. 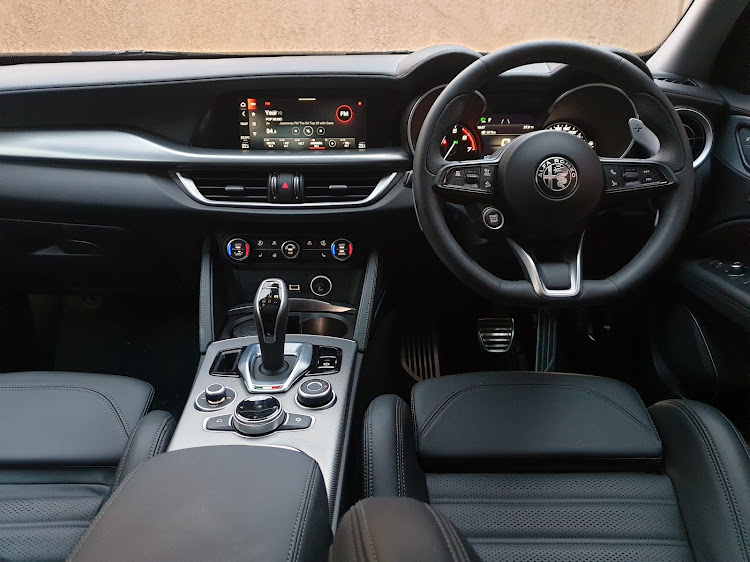 The cabin has been perked up with an updated Alfa Connect 3D Nav 8.8-inch touchscreen infotainment system. Picture: DENIS DROPPA

Drive is sent to both axles via full-time all-wheel drive with a rear bias. Under normal driving only the rear wheels are powered, but drive transfers to the front when additional traction is called for.

The latest update brings no cosmetic changes to the Italian SUV, which was launched here in 2017. Alfa has decided the vehicle has aged gracefully and doesn’t require any Botox or filler, and we can’t disagree.

The cabin is an appealing mix of premium finishes and sporty garnishes, and the brand has raised its game in terms of interior quality in recent years.

Alfas tend to garner above-average interest from the public and while I was photographing the car a motorist stopped to say: “Good choice, sir.”

Unfortunately for Alfa Romeo, that interest doesn’t translate into significant sales and the Italian brand usually languishes with less than 20 sales a month across its whole model range.

Perhaps this consumer indifference is to do with outdated perceptions about Alfa Romeo reliability, or that there are so few dealers around. In terms of pure product appeal the Stelvio has a lot going for it, with one of the segment’s best ride/handling setups, a good dose of luxury for the price, and that all-important Italian charm.

The Alfa Romeo Stelvio Super is priced at R1,159,900 and comes with a five-year/100,000km warranty and maintenance plan.

I’ve long been a fan of the Fiat 500. Simply because it has a bit of character and personality. Sure, you can buy more competent and practical city ...
Motoring
6 months ago

You might expect a one-litre three-cylinder car to be as noisy and underpowered as a yapping Maltese Poodle, but there’s none of that timid, ...
Motoring
6 months ago