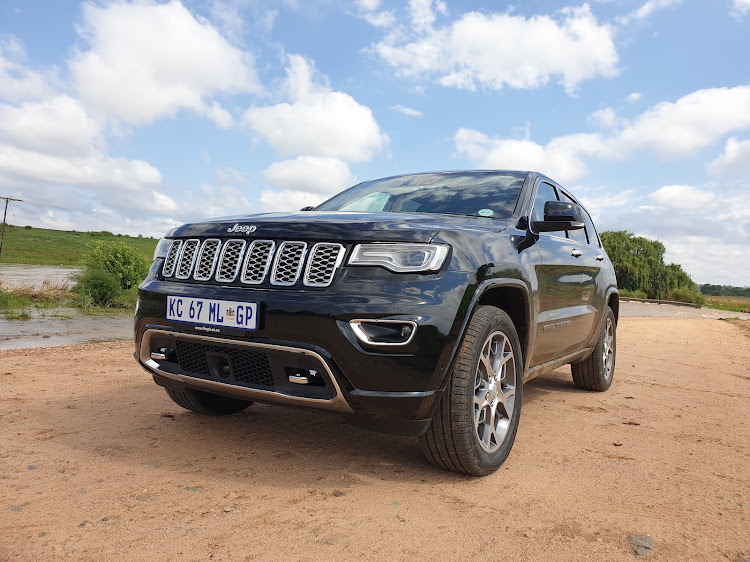 The Jeep Grand Cherokee reminds me of Bob Seger’s Old Time Rock n Roll where he sings: “Call me a relic, call me what you will, say I'm old fashioned, say I'm over the hill, today's music ain't got the same soul, I like that old time rock and roll”.

In the same vein the Grand Cherokee represents a more old-school approach in an era where SUVs are getting ever more hi-tech. Many Jeep devotees will likely be itching to buy the sophisticated new-generation Grand Cherokee that was recently unveiled overseas and is headed to SA late next year.

But there may be a few who, like Bob with his musical nostalgia, prefer the more traditional charms of the current vehicle which will still be around for a few months. Even though it has technology like height-adjustable air suspension and lane-keeping assist, there are distinctly retro aspects about this Grand Cherokee, which has been around since 2011.

For starters, the cabin is littered with buttons in contrast to the minimalist digital dashboards trending in newer vehicles. It looks a little cluttered but you can’t fault the user friendliness; you don’t have to be an antidigital dinosaur to appreciate the convenience of quick-access buttons instead of having to trawl through digital menus to activate features.

That said, the 10-year old vehicle isn’t for Luddites and still has a touch screen infotainment system. The seven-inch screen is small by modern standards but has all the requisite functionality including Android Auto and Apple Carplay, pairing with smartphones via Bluetooth and USB ports.

This Grand Cherokee, which shares its platform with the old Mercedes ML after Merc’s short-lived ownership of Chrysler, also betrays its age in some of its cabin décor. Wood and metallic accents raise the appeal but some of the textures and finishes, particularly certain plastic surfaces and the wrinkly leather seats, don’t breed the same premium feel as many SUV rivals. We haven’t yet experienced the new-generation Grand Cherokee but in pictures its cabin looks distinctly more upmarket.

In terms of comfort there’s little to complain about in this ageing Jeep. Its replacement will  offer the option of seven seats for the first time, but the current Grand Cherokee lays on plenty of space and amenities in its five seats. 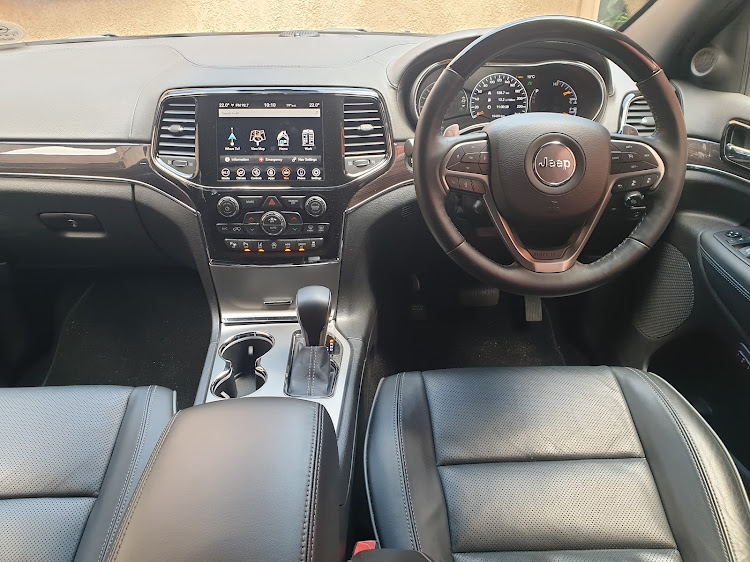 Cabin design is showing its age but it has all the modern functionality. Picture: DENIS DROPPA

The five-model Grand Cherokee range begins with the entry level 3.6 Laredo priced at R799,900, while the Overland on test here is a high-spec version selling for R1,029,900. It is powered by the same V6 engine as the Laredo but its luxury suite includes navigation, electrically adjustable front seats, electric steering column adjustment, rear parking camera, leather upholstery and a panoramic sunroof.

Rear-seat passengers get an unusual amount of pampering, and in addition to a generous amount of space they have adjustable backrests, heated seats, a pair of USB ports and an entertainment system with a pair of DVD screens — ensuring family contentment on long holiday drives.

In a market segment dominated by turbo diesel engines, the Grand Cherokee has a 3.6l normally-aspirated petrol V6 behind its traditional seven-slat grille, with outputs of 212kW and 353Nm.

The claimed figures of 0-100km/h in 8.3 seconds and a 206km/h top speed are relatively modest by sports SUV standards, but it has a satisfyingly broad spread of torque and linear power. There’s no lag as the V6 thrums into action with eager throttle response and a gravelly, old-time rock n roll hum. It’s thirsty however, and the test car slurped 13.8l / 100km.

The Grand Cherokee’s ride/roadholding balance conforms to a more traditional SUV theme. It doesn’t corner with the agility of more road-based SUVs but its plush air suspension does a stirling job of soothing out ripples and ruts.

Roads less travelled are where this American old-timer excels. It is a fully-fledged adventure vehicle with permanent all-wheel drive, height-adjustable air suspension, a low range transfer case, as well as modes for snow, sand, mud and rock.

The Selec-Terrain traction control system includes a brake-lock differential, so that if a wheel loses traction, power is transferred to a wheel on the axle that still has grip. With all these traction-enhancing features, plus hill-descent control, there is little that stops this American SUV in its tracks when exploring the wilderness.

What cements the iconic reputation of a vehicle? Its capability in the metrics for which it was designed to excel? Well, there are a number of ...
Motoring
2 months ago

Mazda’s Ford Ranger-based BT-50 was long in need of replacement, and its sales slowed to a trickle as newer and more modern rivals were launched in SA
Motoring
3 months ago

Compared to some blink-and-you’ll-miss-them vehicle midlife updates, the Nissan Navara has undergone much more than the traditional shot of Botox
Motoring
3 months ago