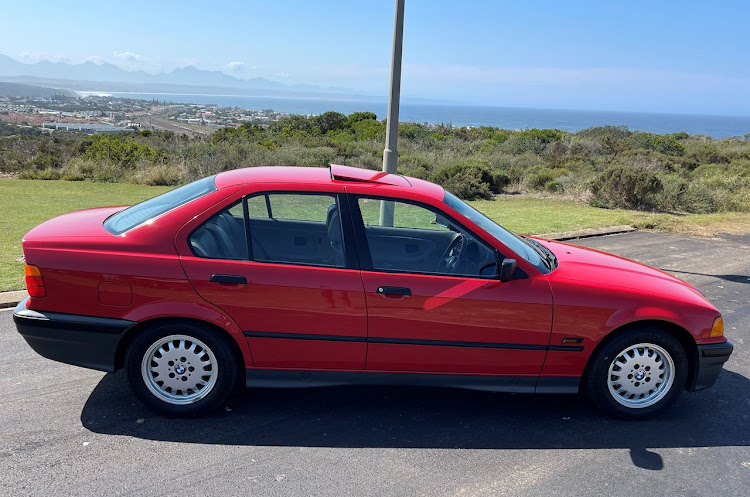 Not a single thing is amiss with this Brilliant Red E36.
Image: Supplied

Vehicular time capsules. We love them at this publication — and we know you love reading about them. In March we featured an immaculate 1989 Toyota Cressida 2.4 GL with just 27,000km on its odometer, belonging to the Toyota SA heritage collection.

The person who sourced and connected the manufacturer with this specimen saw our story. He reached out to us with details of another interesting gem found alongside the Cressida last year, locked away in a Plettenberg Bay garage. What you are looking at here is a 1992 BMW E36 325i with just 17,340km on the clock. 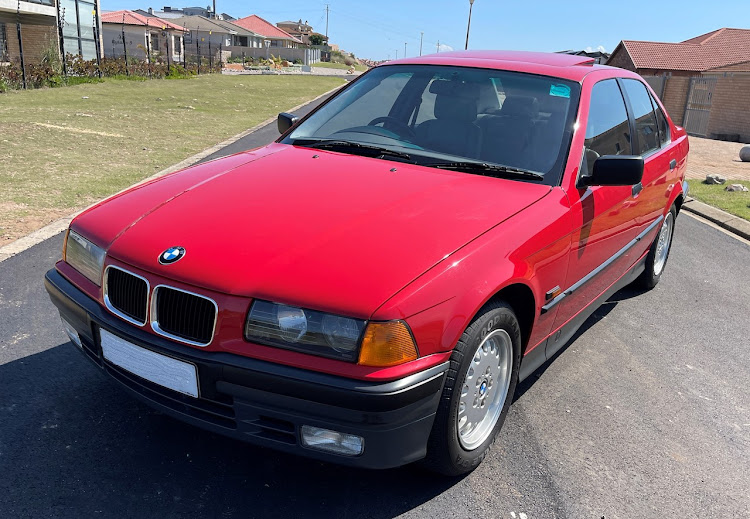 Tyrone Cunningham opted to keep the BMW for himself, pampering it, driving it occasionally to keep the fluids in circulation. The first owner purchased it from Autobahn BMW in Johannesburg and it ostensibly served as an additional, holiday home vehicle, virtually spending its entire life parked. The Auto Atlantic dealer sticker on the rear was likely added when it went for its first oil service on 6,666km. According to the service book, its last maintenance stop was at BMW George in 2021.

“We gave the car a thorough once-over and everything seemed to be in good order, in terms of engine fluids and wiring. However, the car was full of mold, had flat tyres and needed a new battery,” he told us.

“We returned with a new battery and fresh engine oil was inserted into the cylinders before starting to ensure they were sufficiently lubricated for its first start in years. The engine turned over a few times before starting, as if it was driven the day before, which was unbelievable.” 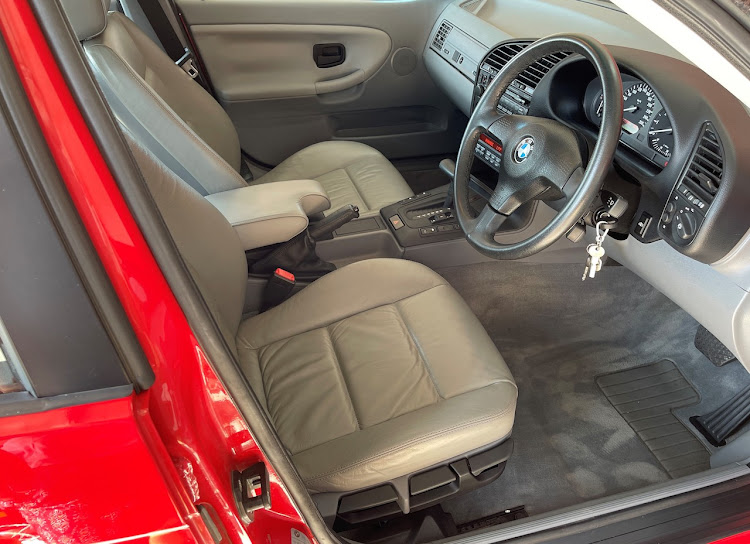 Cunningham, now the second owner, explained that this particular model was among the first of the breed sold in SA. While the E36 was produced in great volumes at the Rosslyn, Tshwane plant, early production units were imported from Germany. He reached out to BMW and learnt that this was the case with his car, produced at the Munich plant.

“I have driven about 2,000km in the car since acquiring it, being inside feels like we are back in the 1990s and it is a real head-turner wherever we go.” . Cunningham plans on keeping the car, boosting its persona in the classic space by attending events and gatherings in the Western Cape. 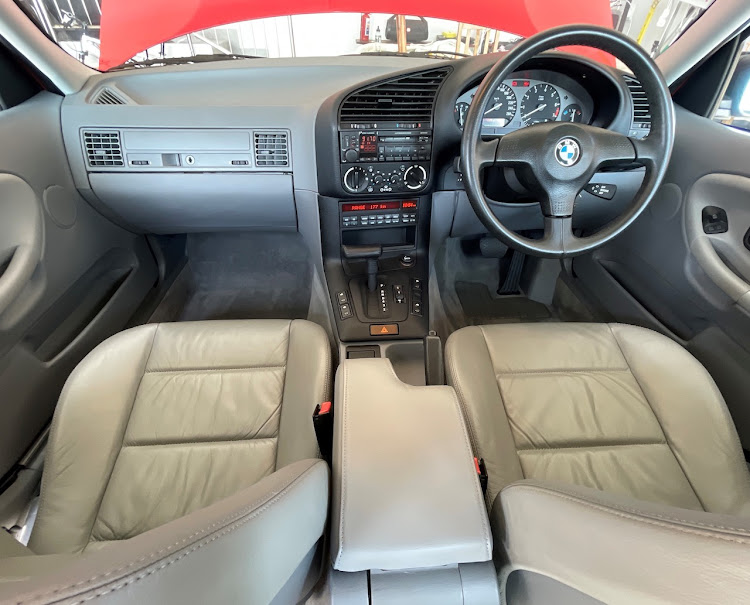 In Brilliant Red paint, with the basic grey and black bumper specification, it matches the vehicle that featured on the front of SA's Car magazine in February 1991. The publication had driven the vehicle before its local introduction a year later.

Our group editor Denis Droppa was at that national launch event. “As introductions to motoring journalism go, I could hardly have asked for a more memorable experience than attending the SA launch of the E36 BMW 3-Series in 1992 where we were flown from Joburg to Cape Town in a Concorde,” he said.

“We cruised at Mach 2 at an altitude of 60,000 feet, which was high enough to see the curvature of the Earth (take that, flat-Earthers), and encountering the E36 was certainly no anti-climax after that exotic experience.” 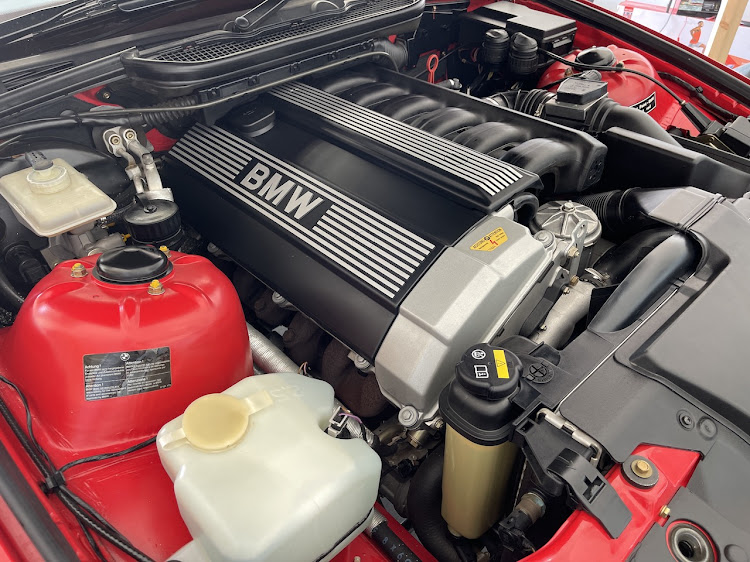 At launch, the 325i was the most powerful engine in the range.
Image: Supplied

“Here was a swoopy and aerodynamic Bimmer sedan that eschewed the boxy lines of its E30 predecessor and brought Munich’s cars into the modern era. Under that ‘Dolphin’ shape as it was to become known was a larger car with improved rigidity and safety.”

“It was also the first 3 Series to be available with multi-link rear suspension, creating more stable and predictable handling without the E30’s tail-happiness.” 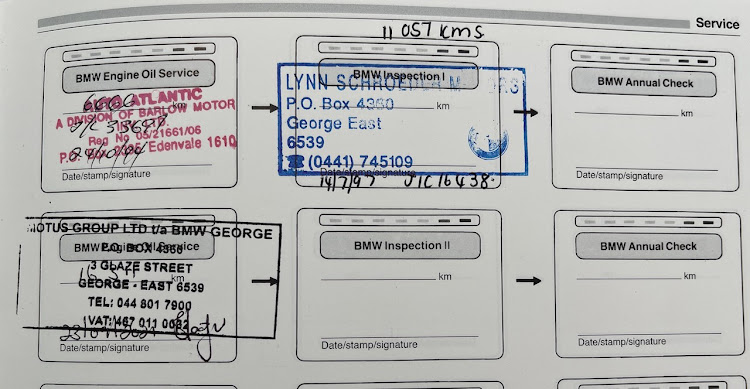 The owner has all documentation on file.
Image: Supplied

Being the 325i, Cunningham’s E36 is powered by the M50 engine, the most potent power source that could be had at the time, until the M3 came. His car boasts desirable options including a sunroof, cruise control, centre arm-rest and a rear window blind. For its time, the comprehensive on-board computer system was at the forefront of technology, offering trip information and more. The 141kW motor is paired with a five-speed automatic. According to the owner, it even sits on its original tyres!

The author of that original Car magazine report was none other than Stuart Johnston, veteran motoring journalist who gave us a brilliant guest column alongside that Cressida piece — a vehicle he also road-tested during his tenure at the title. His sentiments about the 3-Series after driving it in Europe were largely positive. 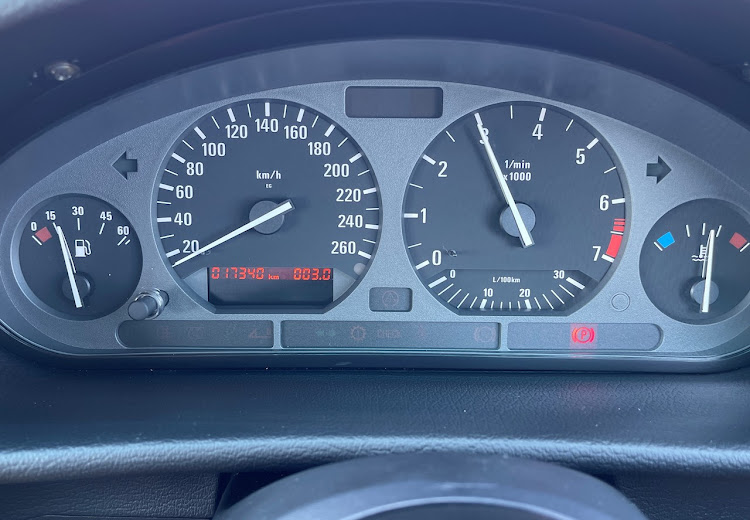 The odometer of the time capsule 325i.
Image: Supplied

“Apart from the designers having achieved a 50/50 mass distribution between the front and rear in the new chassis, the chief executor of the 3’s new approach to lateral G forces is the rear axle design, which was developed closely along the lines of the remarkable Z1’s rear end,” his article noted, in addition to highlights such as its steel upper and lower control arms, gas-charged dampers, anti-dive geometry and elastic wheel alignment joints.

And he seemed to have given it quite a thorough examination, as this excerpt indicates: “Turning up the wick in the new 325i, all these elements came fully alive as I negotiated a variety of challenging corners and straights while exercising the lusty, free-revving six at the Miramas high-speed oval and handling tracks.” 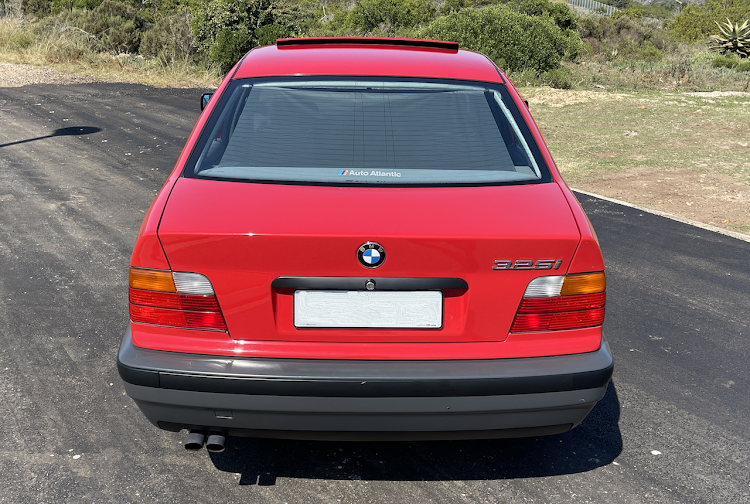 A rear shade and a sunroof were among options fitted.
Image: Supplied

“At about 200km/h, which is about 30km/h off the maximum in the 141kW model, turning into the long gradual curves of the 5km oval (with no banking on the road) produced gradual progressive understeer with some body roll.”

Johnston declared: “The verdict after a number of torturous laps of this exciting track, which included flat-out third gear sweeps, was that for the average driver the car is close to fool-proof. For the reasonably talented sporty driver it is perfect and only for the kamikaze tail-hanger will a bit of frustration set in, given that his idea of heaven was the original BMW 530.” 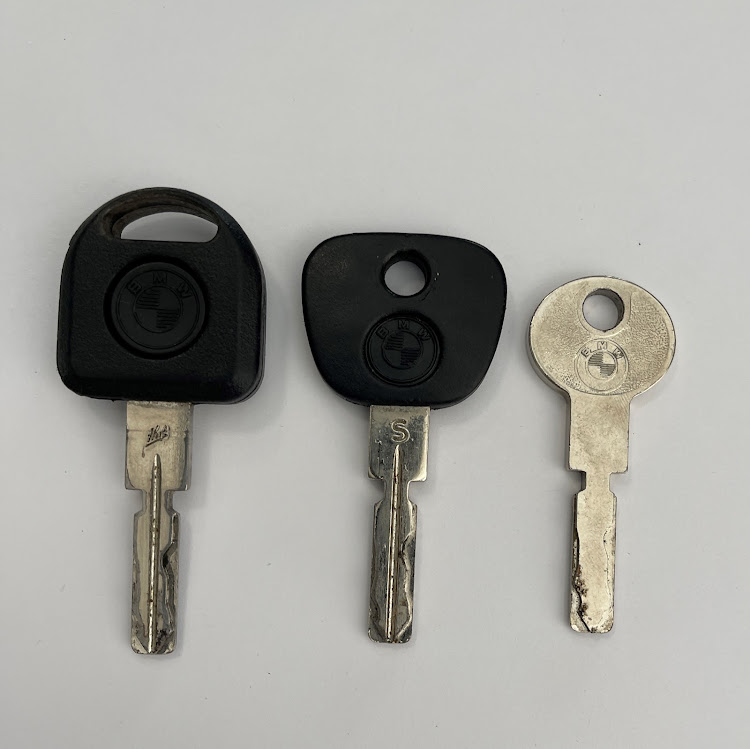 Most amusing to note were his comments about the smoking amenities. “Surprisingly, the ashtray is located on the console behind the gear lever, so that a clumsy smoker could conceivably burn the legs of his front seat passenger. Indeed, BMW seems to have hopped onto the anti-smoking bandwagon, announcing that it is possible to order a ‘non-smoker’ 3-Series in which the ashtray and ciggy lighter combo is replaced by a 12-volt utility socket. Yet another world first!”

Tobacco connoisseurs in 2022 may be pleased to note that a lighter and ashtray in the front centre console remains standard equipment in the modern G20 3-Series.

Built between 1978 and 1983 the SC is the 'xennial' of the classic air-cooled 911 range. It's also partly the reason why this legendary ...
Motoring
2 years ago