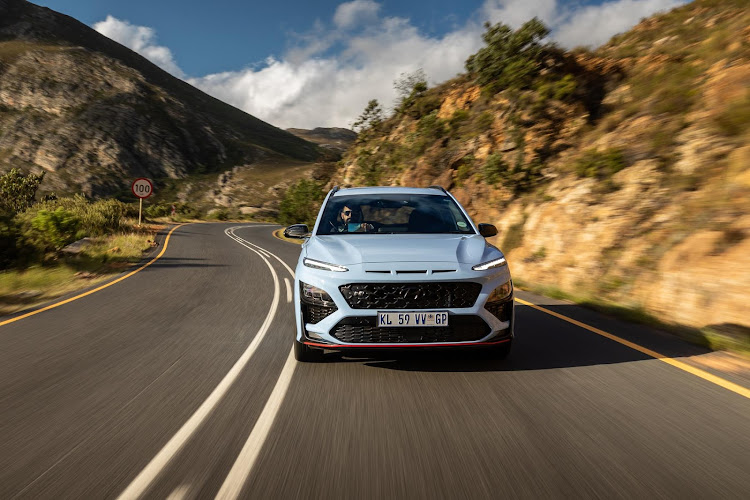 The Kona N is styled like a Monsters Inc. character.
Image: Supplied

It's widely agreed that there's no such thing as a bad car these days. Perhaps with the exception of notable stinkers in the entry-level, budget segment which lack assuring safety credentials.

Pick any modern C-segment sport-utility vehicle and you will find it likely delivers and exceeds the expectations of the average motorist: it will stop and steer as it ought to, deliver reasonable comfort and economy, in addition to boasting a healthy level of kit to protect occupants in a crash. Everyone wins. 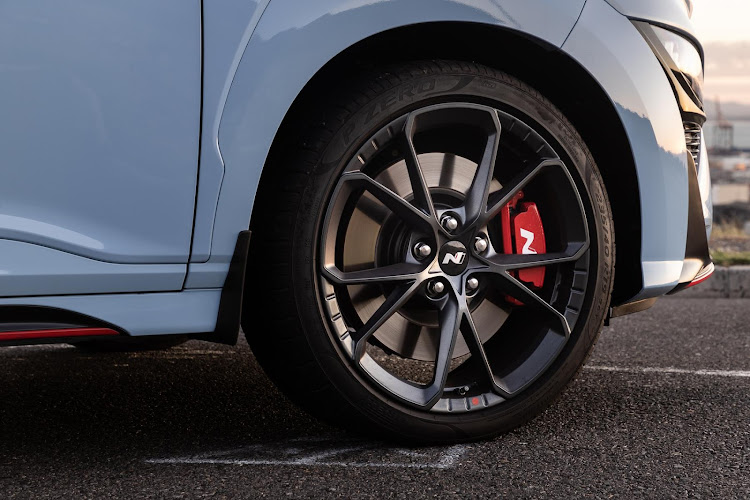 There are almost no downsides to this achievement of parity in the market. Unless, of course, you take the subjective view that the modern automobile has become accomplished to the point where the essence and thrill of driving has been muted, dampened.

Allow me to use the Volkswagen Golf 8 GTI as a reference point. It's a perfect representative of the climate.

The model is significantly heavier than its direct predecessor, notably less enthralling to pilot, acoustically muzzled and digitised to the point of user-unfriendliness. A real bore.     On the other hand, you've got Hyundai and its N-division. The carmaker seemingly hasn't received the memo that performance cars need to be quiet and tamed to a feeling of indifference. 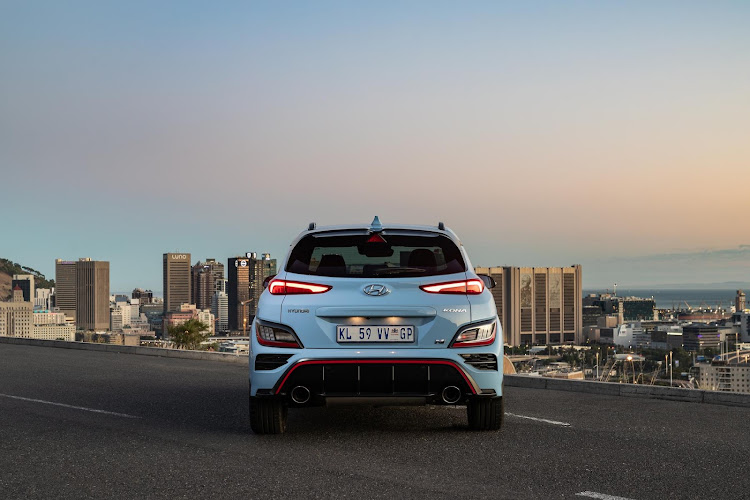 Last week we spent time with the Kona N, easily the most ridiculous medium-sized crossover you can buy in the country today. Ridiculous, but utterly fantastic. It put me in mind of the first-generation Audi RS Q3 in some ways. The on-paper concept of a powerful, boisterous crossover makes little sense. But the execution makes for a desirable, endearing result.

Now don't get us wrong, the Kona N can do the sensible stuff. This is something that was put to the test when one of my duties entailed transporting three people and their (oversized) baggage to the bus station for a Cape Town trip. The rear hatch appeared to swallow more than what the 374l claim led me to believe, though one item had to sit on the rear seat between the two occupants there. Fold the rear seats down and you get 1,156l.

All the expected niceties are present. Unlike the Germans, Hyundai's R759,900 price includes just about everything buyers would want, as standard. A 10.25-inch infotainment system supports Android Auto and Apple Car Play, supplemented by a digital instrument cluster. You get wireless charging, a sunroof, climate control, a reverse camera, keyless-entry and start, leatherette seat upholstery and heated front seats. The list goes on. 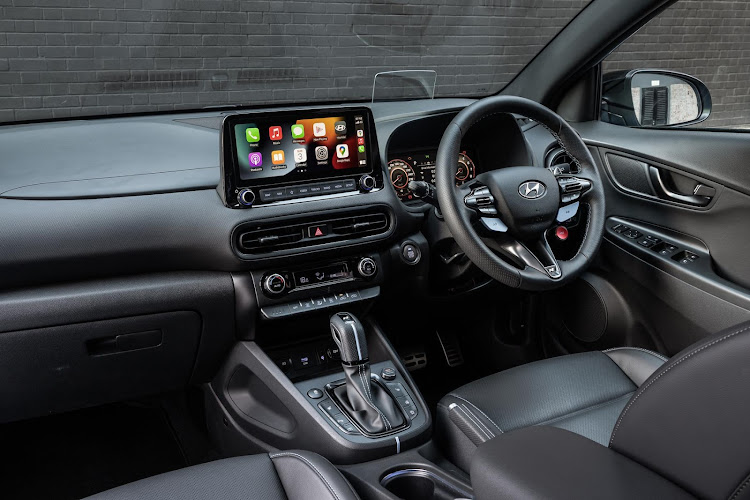 On the safety front, it has six airbags and a full suite of driver assistance features, such as a blind-spot monitor, lane-departure warning, forward-collision assist, rear-cross traffic alert and steering intervention system to help you stay on course. This function can be deactivated. Which is how it remained for the majority of my time behind the wheel.

You are likely to be similarly inclined. It's a vehicle that demands your attention and involvement. Toggling between the various driving modes brings tangible changes in the car's personality.

Hit the "N" button on the steering wheel and all hell breaks loose. Even the instrument cluster layout changes, signalled by a fiery visual cue. The exhaust note becomes more pronounced, guttural, sprinkled with hearty crackles and pops, to the delight of those outside. 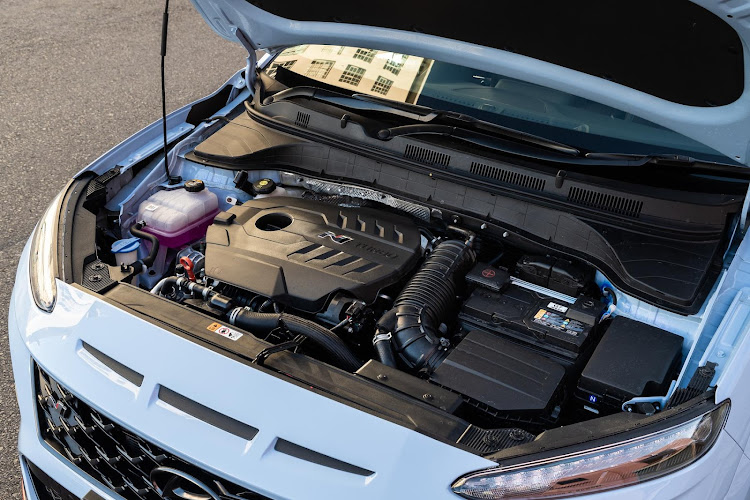 Rampant torque-steer makes the Kona N quite a handful off the line — you can feel the steering wheel writhing in first, second and even third, as the boosted 2.0-litre shoves its output to the front axle. The 208kW and 392Nm output makes for a claimed 0-100km/h sprint time of 5.5 seconds when the launch control function is used. An eight-speed, dual-clutch transmission is on duty. It's not as sharp-witted as the unit offered by Volkswagen, but it gets the job done.

It could be argued that an all-wheel drive system would be beneficial, but the additional traction would stymie the wildness of character that makes the car so charming. It's hugely entertaining and your inner hooligan will take joy in the wayward theatrics of the Kona N. Brace for a hard ride from the firm, track-orientated suspension, which offers virtually no pliancy over Johannesburg's rippled and scarred asphalt. But that certainly didn't put me off.

Here's a performance car with soul and feel, one that isn't trying to mute its character with layers of polish and poise. The Kona N likes to be driven hard and with vigour. In those moments one is quite thankful for Hyundai's seven-year/200,000km warranty.

What we have here is a sporting compact crossover for a committed driver. A note: you can also have the more conventional i30 N for the same price.

But at more than R1.2m it’s a lot pricier than the most expensive petrol-powered XC40
Motoring
1 month ago

In our era of shared platforms, powertrains and cross-pollinated technologies, no manufacturer is truly independent.
Motoring
1 month ago

REVIEW: The Audi E-tron is an electric car in regular clothes