WATCH | Don’t ask if SA is ready for a woman to lead, says Mandisa Maya

The Supreme Court of Appeal judge president is the only woman being interviewed for the role of chief justice. 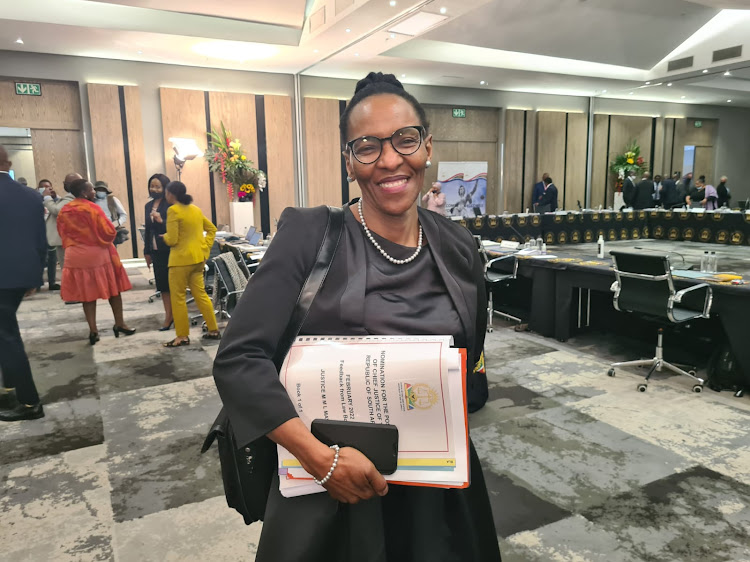 If you're thinking of asking another woman judge whether the country is ready for a woman chief justice, think again, says Supreme Court of Appeal judge president Mandisa Maya.

“I don't think it's a proper question to ask because it implies all sorts of things. SA has always been ready to have a female chief justice at inception,” she said in reply to the question which had also been posed to Justice Mbuyiseli Madlanga.

Maya was being interviewed for the position of chief justice and is competing against Madlanga, Gauteng high court judge president Dunstan Mlambo and acting chief justice Raymond Zondo.

Much of Maya's interview focused on challenges of gender transformation in the judiciary. She said women lawyers still struggled to get briefs in commercial and other complex legal cases, leading to disadvantages when they apply for judicial vacancies.

Maya's candidature is supported by a variety of international and local women's organisations.

Commissioner Sylvia Lucas, an MP, said this was a sign that she had “become the hope and the pallbearer for women’s aspirations”.

“The anomaly in what is being said is the fact that we are going to interview four candidates but you are the only woman ... We want to commend you and say that you have made us proud as women of SA. I’ve said it before, if a woman can be nominated as a president then we have broken the glass ceiling,” Lucas said.

Maya is the first woman judge to be interviewed for the position of chief justice.

Women don’t back each other? Tell that to Mandisa Maya

Criticism of the judiciary should never reach a level where courts no longer enjoy the respect they should have from the public, ConCourt justice ...
News
3 months ago

Maya said that, in her view, the function of a chief justice was to sit in court, preside over cases and produce judgments expeditiously.
News
3 months ago