Between 500 and 600 people have been displaced in Hankey, Eastern Cape. Clashes with locals in the citrus valley led to 180 Lesotho nationals being evacuated with the assistance of their government. 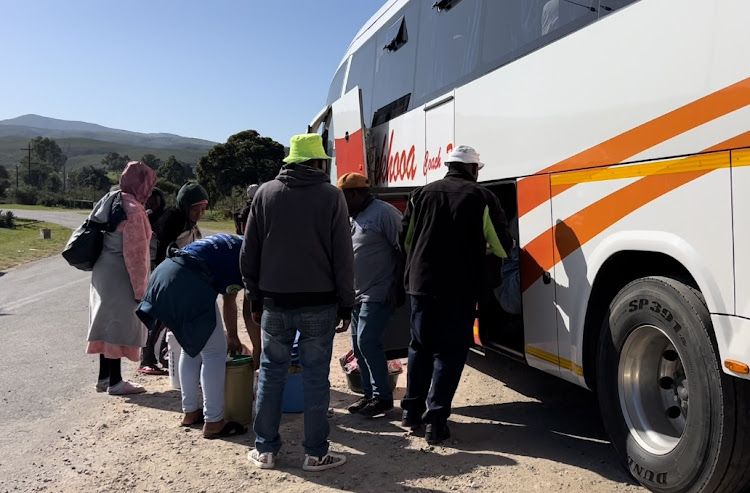 The government of Lesotho has stepped in to help about 180 citizens flee the Eastern Cape farming community of Hankey.

This weekend the government arranged three buses to transport those who wanted to return to Lesotho.

The group arrived home on Sunday morning and were transported to their districts.

Likopo Mahase, minister in the office of the prime minister, told TimesLIVE the Lesotho embassy helped to arrange buses after residents in the Hankey area accused the Basotho group of being involved in the murder of two people.

Mahase said an undetermined number of Lesotho citizens remained, but they would also be evacuated.

Protests erupted on May 30 after a Lesotho national allegedly murdered two men in a tavern on May 29. Many people lost their belongings, including passports, after homes were set alight and property was looted. The Lesotho embassy said it would allow those affected  to cross the border without passports.

Between 500 and 600 people have been displaced after shacks were burnt down. Police spokesperson Col Priscilla Naidu said: “The reason for the protest action is that the community in Centerton allege the foreigners are responsible for the death of two people in Centerton.”

It was further alleged that on the afternoon of June 1 the Centerton community and a group of Lesotho nationals were embroiled in an altercation in Pearl Road in Centerton.

“During this altercation, a 28-year-old Lesotho national sustained severe injuries. He succumbed to his injuries in hospital. A case of murder is under investigation. No arrests have been made yet,” Naidoo said.

Kouga municipality, local law enforcement, farmers and members of the community donated food, blankets and diapers and arranged shelter for those who had been displaced since Wednesday evening.

Mahase said: “The Lesotho government needs to work hand in glove with SA to resolve these issues.

“From Jeffreys Bay all the way to Cape Town, there are Lesotho nationals working on farms, so we need to resolve this issue.”

It is not clear whether the people who have been evacuated will return to work in SA. A small number of people in Lesotho have been pleading for jobs on social media.

A 72-year-old farmer was shot in the leg on his smallholding at Hankey in the Eastern Cape.
News
10 months ago

Fourth-generation Gamtoos Valley citrus farmer Khaya Katoo will make a pilgrimage today to the Kouga Dam to pray with his wife Crewelyn.
News
1 year ago