The Eastern Cape farming town of Hankey was gripped by violence involving locals and migrant workers. There are mixed feelings among residents in the aftermath, with many saying police should have intervened.

Residents of the small farming area of Hankey in the Eastern Cape have mixed feelings about a sudden flare-up of violence that saw 180 Lesotho migrants flee and dozens more in hiding.

Farmers have expressed concern that seasonal employees had to run away after a Lesotho man was accused of murdering two people in the area.

Citrus farmer William Young employs one foreigner who is now in a safe place.

“One of my employees was scared, but I couldn't understand his fear. It was only when I saw things were getting intense that I realised the situation needed intervention,” he said.

He helped the man flee with a few possessions before his home was torched. “When you see a guy throw a couple of items into a blanket and running to your bakkie with what he considers [valuable] ... he's left the rest, you know.”

Residents told TimesLIVE they were happy to see the migrant workers leave as they viewed them as being part of the area's crime problem. 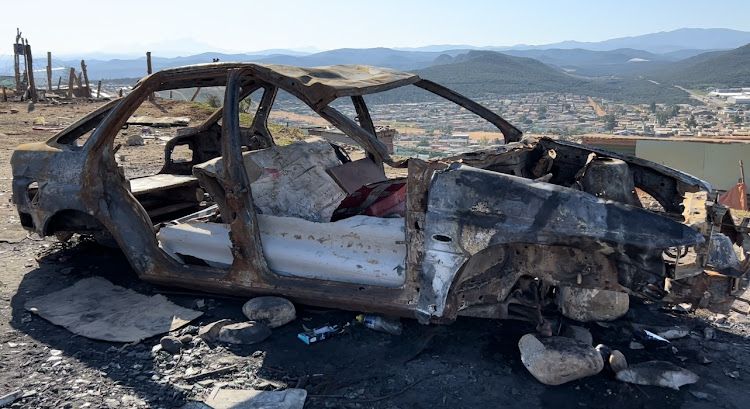 This car belonged to a Lesotho national. Between 500 and 600 people fled from Mountain View township when shacks were set alight.
Image: Catherine White

Farmworker Joseph Bam explained: “The people are happy they are gone. The problem is they wear those masks. Anyone can hurt you, but tomorrow you won't be able to identify them. They wear those blankets. Nobody knows what is under those blankets. In the case of Hankey, two people were killed. They were just found on the side of the road.”

Hankey came to a standstill for a week when community members forced Lesotho nationals to evacuate after protests became violent. On Tuesday it was business as usual, but not without its consequences.

The closure of the main road in Hankey, which farmers use to get their exports ready for the market, has meant there is now a one-week backlog.

Citrus farmer Anneli Young said it was too early to determine financial losses due to the shut down, because of the backlog. “We will be able to say what the financial impact is in about three weeks, but we are aware of harvests not making it to the ships on time for export.”

Bam was on a quest to find between 24 and 60 people to step in for the season's work.

“We are sitting with the consequences, because now we are short-staffed and need to work Saturdays as well, but what they did was wrong.”

The government of Lesotho has stepped in to assist about 180 citizens flee the Eastern Cape farming community of Hankey.
Video & Podcasts
4 weeks ago

Migrant workers, however, weren't the only people who evacuated the area. Many Xhosa people left as well. Pointing at numerous empty spaces between the shacks, Buyiswa Mooi, a resident of Mountain View informal settlement, said: “A Xhosa lived there. People are scared, they don't want to come back.

“They told us the Xhosas can stay, it's only the foreigners who must go, but they were scared so they left.”

Multiple people told TimesLIVE local authorities and police could have stepped in and prevented the situation from escalating.

“Had the police intervened, or actually found the culprit responsible for the murders, I don't think we would have been in this situation,” said Young.

Hankey resident Gabriel Plaatjies said: “It is impossible to think the municipality, police and anyone in charge just stood by and did nothing.”

Local authorities visited Mountain View for a mapping exercise on Wednesday morning. They want to ensure there are no illegal structures in the area to prevent a reoccurrence of “Hankey”.

After meetings with church leaders, Hendricks said: “The feeling is that violence isn’t the way forward and there were several leaders saying what happened in Hankey was wrong.

“The existing shacks must be numbered and the area monitored so no new shacks can be erected.”

Housing officials and law enforcement are due to visit the shack settlement on Thursday.

A woman suspected of being an Operation Dudula member targeting residents in Alexandra came under attack by angry community members on Tuesday.
News
4 weeks ago

An elderly woman was seriously injured after her vehicle "rolled seven times" down Sani Pass while trying to negotiate an icy corner.
News
4 weeks ago

Close to 160 alleged illegal immigrants were arrested by the police and the SA National Defence Force during a roadblock at the R702/R26 crossing, an ...
News
1 month ago

It is time to seek solutions where the conduct, ethics, integrity and values of public representatives are beyond reproach and there is ...
Opinion & Analysis
1 month ago