Doc with a difference 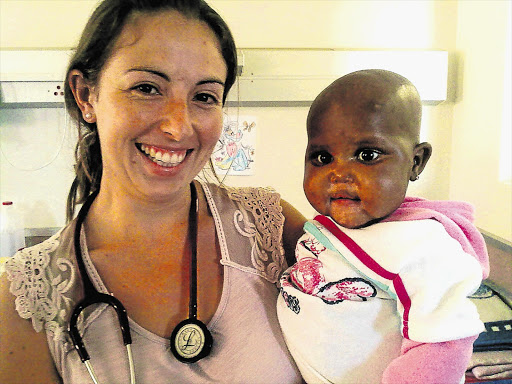 She is no Father Christmas, but Gatley's passion for her patients, and her willingness to go the extra mile, has earned the 28-year-old the Eastern Cape's "rural doctor of the year" award.

A woman who could be working in an urban private practice, she has instead opted for a rural life at the 147-bed Zithulele hospital, where she bakes cakes for children hospitalised for long periods, has cooked boerewors for an underweight burn victim who need more protein in his diet and given Christmas presents of clothing to patients.

Gatley, described by colleague Dr Taryn Gaunt as an "incredibly compassionate and caring" doctor who works "really hard", is committed to making a difference.

The association also recognised her help to very poor patients with taxi money to get to Mthatha if the ambulance was not available.

A 16-year-old admitted to the hospital with 40% of his body burnt in a hut fire, was "wasting away" so, three times a week, she brought her patient extra meat from home to raise his protein levels before he had his skin graft.

"The hospital diet is not that good," she says.

After the graft the boy returned to the hospital to visit her.

"I didn't know if he had died but three months ago he came back. It was incredible to see him walking again and looking so chubby," she said.

Although she can only shop for food once a month, Gatley says she lives in an "absolutely beautiful place. We can see the sea from our hospital."

Over and above the beauty, Gatley says the main reason she works at the hospital is the committed medical staff, including two "doctor couples", who want the hospital to give excellent care to the local people.