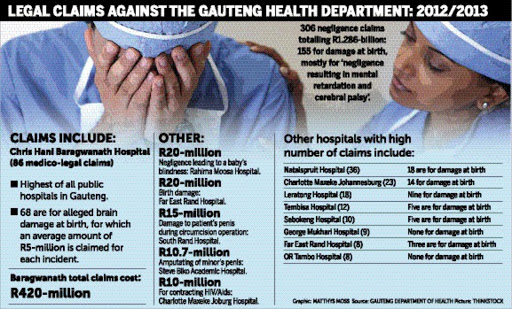 A child's penis was amputated by mistake. Babies are born brain-damaged after their mothers are not properly cared for during labour and an infant went blind after doctors failed to diagnose a problem at birth.

These are examples of the medical negligence that is costing provincial health departments millions in malpractice claims.

The Gauteng health department is facing negligence claims amounting to R1.28-billion for the 2012/2013 financial year. In 2005, the department expressed concern about complaints of malpractice, which had led to lawsuits of R216-million in the previous five years.

North West paid out R13.3-million in November for negligence at a state hospital in Witbank that resulted in a baby becoming blinded. Medical negligence attorney Adele van der Walt said she was contacted daily by people from across the country who had suffered negligence at both private and government hospitals.

The most common complaint, say lawyers, is about babies born with cerebral palsy, a form of brain damage that often occurs when mothers have difficulty giving birth.

Some 68 of the 86 claims against Chris Hani-Baragwanath Hospital in Soweto are for babies who have cerebral palsy.

DA Gauteng health spokesman Jack Bloom said the provincial department should prevent lengthy and costly legal battles by settling cases in which its hospitals were clearly in the wrong.

He said judges were awarding much higher amounts to victims than six years ago.

Lawyer Karen Vermaak said babies suffered brain damage because of poor monitoring of women in labour. If nurses did not detect a baby was in distress and react fast enough, the infant was deprived of oxygen.

Much negligence in both the private and public sectors was caused by nurses' poor training and attitudes.

Van der Walt said under-qualified nurses were working in intensive care units in private hospitals. "Sometimes there is only one specialised nurse monitoring four babies, instead of one."

Van der Walt was approached this week by a woman who had given birth in a private hospital in Gauteng a month ago. "The patient had told the nurse: 'My water broke. I am in labour.' The nurse would not help her despite the mother insisting she was having contractions. Eventually she stood up and the baby fell onto the floor, hitting his head. It is too early to determine whether there is brain damage."

The spokesman for the Gauteng health department, Simon Zwane, said: "Considering the number of 200000 babies born in the province annually, the number of claims arising on what is alleged to be negligent behaviour is minimal."

He said: "The department admits that hospitals should be places of healing, hence quality assurance measures have been instituted and more nurses were trained, especially midwives and neonatologists."

Malpractice cases include misdiagnoses, the supply of the wrong medication, surgical swabs or instruments left in people during surgery, and hip replacements that are not done properly.

Health Minister Aaron Motsoaledi has set up a team to investigate the increasing number of medical negligence cases. He has suggested a cap on payouts to help health departments avoid bankruptcy.

The minister's spokesman, Joe Maila, said Motsoaledi was determined to solve the problem.

Van der Walt said: "There were a number of changes in the law that led to the higher incidence of malpractice. Changes to the Road Accident Fund in 2008 resulted in less work for personal-injury lawyers. This means they have moved into medical malpractice."

A Constitutional Court ruling in 2008 that allowed lawyers to attach assets of the state if it failed to pay has also led to more lawyers suing the state.

Lawyer Gary Austin said payment for nearly every case he won against the Gauteng health department was delayed so after a month he issued a warrant of execution showing his intention to attach assets of the state.

The growth in negligence claims has led to an increase in the cost of insurance for doctors. A gynaecologist can pay as much as R300000 a year, leading to higher costs for patients and making work as a gynaecologist unsustainable.

Motsoaledi has complained about a shortage of gynaecologists and the SA Private Practitioners' Forum has warned the shortage is becoming severe.