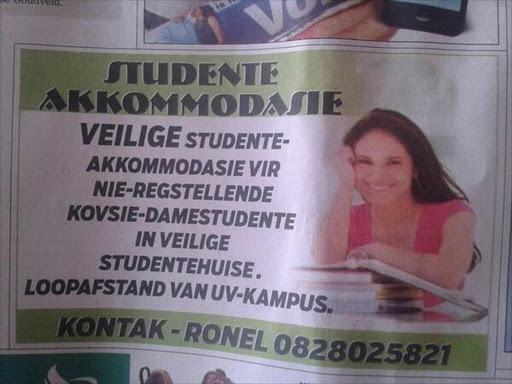 An investigation conducted by black and white students following a tweet addressed to Jansen on Saturday will accompany the advertisement in the complaint.

“We have records of those interactions and will be reporting this private residence to the appropriate authorities.”

Jansen expressed shock and disappointment at the advertisement, saying the outright nature was a “very rare” occurrence.

“People who let out private accommodation to students are more concerned about making money than about the colour of that money.

“This is the first time I have come across such blatant racism from the private providers in the city or the suburbs,” Jansen said.

The Times tried calling the contact number provided at the bottom of the advertisement, to no avail.

A Kovsie Private Accommodation employee, who asked not to be named, said the number of students flocking to their offices on campus was increasing on a daily basis.

“The varsity does not oversee private accommodation not part of KPA and it makes it difficult to regulate the ridiculous requirements they have of some students,” he said.

Only 20% of the students are accommodated at the institution's residences.

Student Representative Council president Phiwe Mathe said the plight of racial profiling against students by landlords was of great concern to the student body and the university.

“This just shows what we have been experiencing in the town for years, but only on a subtle note.

“The SRC needs to be firm with such behaviour and the university cannot be associated with such,” he added.

While the SAHRC had not yet received a complaint by yesterday, spokesman Isaac Mangena encouraged those wronged to approach their Free State office.

“From what we have heard, it sounds like a racial profiling incident, which is strongly condemned by the constitution.”

Mangena added: “It is upon all of us, collectively and individually as South Africans  to rid the country of anything that's racist”.

The advert is for accommodation at a private student house off-campus and is not affiliated to the university.