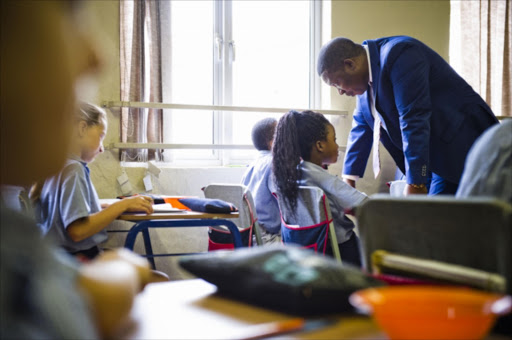 Gauteng MEC for Education Panyaza Lesufi during a visit to Curro Foundation School on February 2, 2015 in Pretoria, South Africa.

An investigation by the Sunday Times has found that more than 75% of the teachers at several former Model C schools are white.

Change at independent schools has also been slow, with only 2462 black teachers among the 12500 teachers at 732 schools which are members of the Independent Schools Association of Southern Africa.

A total of 685 of these schools are in South Africa.

Curro Holdings, which owns about 40 schools around South Africa, said 505 of the 1652 teachers were black.

Schools blamed their lack of transformation on, among other things, the low turnover rate among white teachers, some of whom had been at the same school for more than 30 years.

Many said they battled to attract top-quality black teachers.

Several former Model C and independent schools failed to provide a racial breakdown of their academic staff, among them Roedean School, St Andrew's and Parktown Boys' in Johannesburg, Pretoria Girls', and Kearsney College, Maritzburg College, Westville Boys' and Westville Girls' in KwaZulu-Natal. The Ridge in Johannesburg referred queries to the Independent Schools Association of Southern Africa.

The South African Council for Educators this week said the Department of Basic Education should consider a transformation charter for teachers.

"In our experience, Herschel currently does not attract enough top-calibre black teacher applicants for advertised posts.

"Many black teachers feel committed to their own communities," he said.

Guy Pearson, headmaster of Bishops in Cape Town, said his school, too, had developed an intern programme to mentor a pool of future black teachers for the school.

Shaun Simpson, principal of Rondebosch Boys', also in Cape Town, said most of his teachers had been at the school for more than 20 years and that there was very low staff turnover, "so the shift in changing the demographics is slow".

He said the school had appointed four teachers from previously disadvantaged groups to management posts in the past two years, and "two of our most recent teacher appointments were black".

He said "equity principles" were followed for the appointment of state as well as governing body teachers.

In KwaZulu-Natal, Hilton College principal PB Ducasse said the school "actively pursued the goal of a transformed academic staff", but transformation had been slower than hoped.

Michaelhouse principal Greg Theron said: "The board has set very clear expectations that black teachers be sought and where possible employed."

He said seven black teachers employed at Michaelhouse had resigned in the past five years for promotions at other schools.

Dr Tim Nuttall, rector of St Stithians College in Johannesburg, said the school had adopted a transformation charter in 2009 to commit the institution "to embrace diversity".

Anthea Cereseto, headmistress of Parktown Girls', also in Johannesburg, said tha if two suitable candidates were available for the post, "we would hire the person who added to our diversity".

It had offered teaching bursaries to its own pupils and intern programmes to students pursuing a postgraduate certificate in education, but "we simply don't get the applicants, despite going to both the University of Pretoria and Unisa".

Another principal, who asked not to be identified, said black parents were the first to complain about unsatisfactory teaching by black teachers, saying they did not move their children out of the township to have the township teachers teaching them in suburban schools.

"This is all racist, but underlying it is the serious problem we have with the shortage of really good teachers, no matter what colour."

Matakanye Matakanye, general secretary of the National Association of School Governing Bodies, said some black parents considered black teachers to be inferior. "This is why township children left in droves to former Model C schools."

Tim Gordon, national chief executive of the Governing Body Foundation, said he had heard of former Model C schools being approached by education officials who urged them not to "poach" the best teachers from township schools.

"In suburban schools, teachers are hugely involved after hours in school activities. But there are people in other schools who don't go through that and who don't see it as part of their lifestyle. That's why they don't apply to these schools," he said.

Lebogang Montjane, executive director of the Independent Schools Association of Southern Africa, said workshops based on its transformation toolkit were being delivered and were "enthusiastically received".

"Since democracy, the question of staff diversity has been placed at the forefront of the educational missions of many of our schools," he said.

Keeping tabs on the numbers