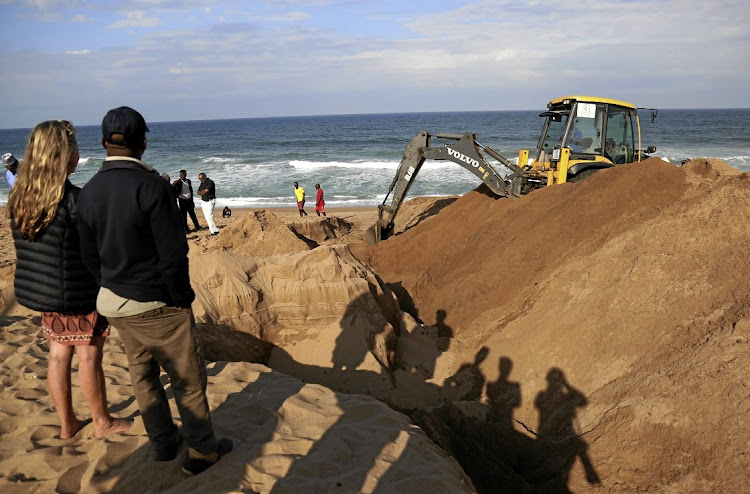 Police are excavating at Blythedale Beach on the KwaZulu-Natal North Coast where forensics are searching for the remains of three of Gert van Rooyen's victims. Image: JACKIE CLAUSEN

Former Springbok captain Gary Teichman – through his earthworks company‚ Teichman Civils – has donated an excavator to shift tons of beach sand as police continue a search for victims of paedophile Gert van Rooyen at Blythedale Beach north of Durban.

Police and forensic investigators broke ground on Wednesday following a fresh lead in the case which has gone cold after nearly three decades. The site of the excavation is a concrete storm drain which runs from a public toilet onto the beach.

Police investigators began digging at a site on Blythedale Beach, north of Durban, on Wednesday. It is believed to be where the remains of girls kidnapped by paedophile Gert van Rooyen are buried. Subscribe to TimesLIVE here: https://www.youtube.com/user/TimesLive

Speaking to TimesLIVE‚ Teichman said that an excavator which had been sponsored by his company was “on the way”. He would not be drawn to comment on specifics on what the earthmover would be used for.

The beach is believed to be a burial site for girls kidnapped by Van Rooyen in the 1980s. Van Rooyen and his girlfriend Joey Haarhoff were accused of a spree of child kidnappings over 30 years ago.

They are thought to have abducted and murdered at least six young girls between 1988 and 1989. The investigation into Van Rooyen and Haarhoff remains an open police file with an assigned investigating officer.

The bodies of his victims have never been found.