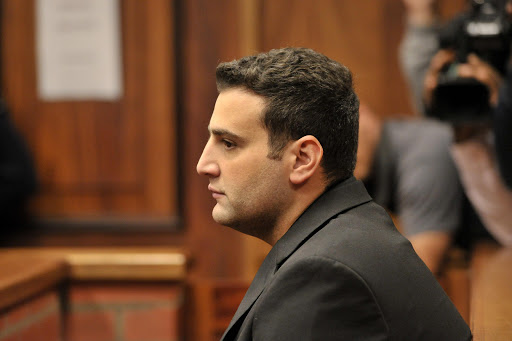 The phone of murder accused Christopher Panayiotou’s mistress was used 17 times to contact one of the men initially approached to carry out the alleged hit on his wife.

This was revealed by data analyst Thereza Botha in the Port Elizabeth High Court on Tuesday. Botha said the handset of Panayiotou’s cousin was used to contact suspected triggerman Sizwezakhe Vumazonke prior to Jayde’s murder.

Through her testimony‚ Botha tied up months of evidence as she set out to connect the dots between Panayiotou and his co-accused.

Botha said Panayiotou was in regular contact with his former employee‚ Luthando Siyoni‚ whom he allegedly asked to arrange his wife’s murder.

It is alleged that Siyoni‚ in turn‚ made contact with various acquaintances saved on his phone as “Trompie”‚ “Happy Trigger” or “Sky” before ultimately giving the job to now-deceased Vumazonke.

At one point‚ in February 2015‚ Siyoni sent a text message to Sky with a description of Jayde’s car.

It is alleged further that Vumazonke had recruited Sinethemba Nemembe to help him carry out the kidnapping and murder on April 21 2015.

According to Botha‚ it could not have been Panayiotou using Coutts’s phone to communicate with Trompie as his handset registered in a different area during those times.

Botha said Panayiotou and Coutts were in regular contact‚ except when Panayiotou was with Jayde on her family’s farm near Uitenhage.

When Jayde was away‚ however‚ like in September 2014‚ Coutts’s phone registered with the Linton Grange tower in the vicinity of the couple’s Stellen Glen complex.

Coutts’s best friend at the time‚ Clarishka Kapp‚ testified last year that Coutts had often spent the night with Panayiotou when Jayde was away.

“Coutts’s handset seemed to have spent nights in the vicinity of the residence of the deceased when the deceased was away‚” Botha said on Tuesday.

Botha said multiple SIM cards were placed in Panayiotou’s handset during this period.

Turning to Panayiotou’s cousin‚ Claudio Bertolani‚ Botha said that between September 2014 and April 2015‚ the two phoned each other 810 times.

Bertolani’s cellphone records became of interest to her because his handset was in constant communication with Panayiotou‚ and was also used to contact Vumazonke in January 2015‚ she said.

Botha returns to the stand on Wednesday.