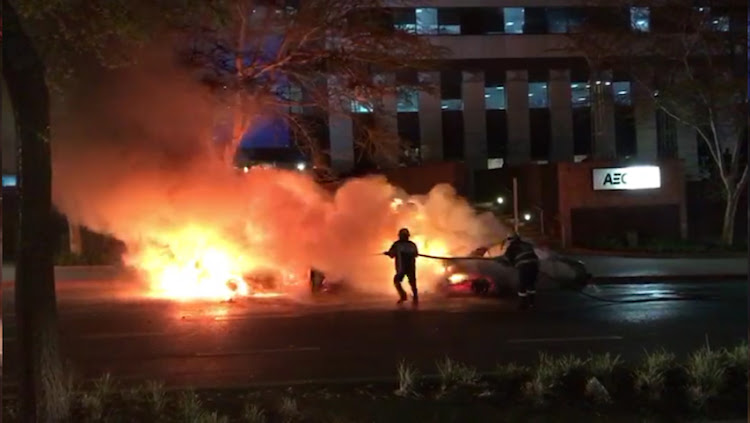 Uber has condemned the attack on its driver whose car was set alight near the Sandton Gautrain station on Thursday evening.

“We’re aware of the situation‚ at this time we can confirm that one vehicle is registered to use the Uber app. We are busy investigating the second vehicle‚” Uber spokeswoman Samantha Allenberg said.

Sandton resembled a war zone as police fired stun grenades to clear the streets‚ which were occupied by taxi drivers carrying weapons and petrol bombs.

Two Uber taxis were petrol-bombed in Sandton in Johannesburg on Thursday night.
News
4 years ago

Uber drivers retaliated by burning down one of the metered taxi vehicles. They also went in search of other metered taxi drivers in the nearby hotels.

Uber said it was relieved to hear the driver of the vehicle was not injured. Uber said on being notified of this incident‚ its operations‚ security and law enforcement teams immediately reached out to the relevant authorities.

“Any situation where driver safety is put at risk is absolutely unacceptable to us. That people are choosing violence and threats against those bringing choice in transportation is completely unacceptable.”

Sandton city streets resembled a war zone on Thursday evening as Uber taxi drivers embarked on a rampage to avenge an attack on two of their drivers‚ ...
News
4 years ago

One Uber driver whose car was burnt down was too shocked to speak.

Another said: “They didn’t say anything. They just pulled him out of the car‚ they were carrying guns‚ and then they burned the car. He ran for his safety.”

The other Uber driver said around 15 armed men swarmed the cars.

“They just opened the door…put the petrol bomb and burned it up [at the ]same time. The second car - same thing‚” he said.

An eyewitness‚ who did not wish to be named‚ said the Uber drivers managed to escape the burning cars.

Gunshots and petrol bombs set the late afternoon commuting scene in Sandton on Thursday‚ as a group of men - reported to be meter taxi drivers and ...
News
4 years ago

“They ran away. They also tried to open the door for the other driver. It was meter taxi guys‚” the witness said.

Fire fighters arrived within minutes to extinguish the blaze while medics on scene indicated no-one had sustained serious injuries.