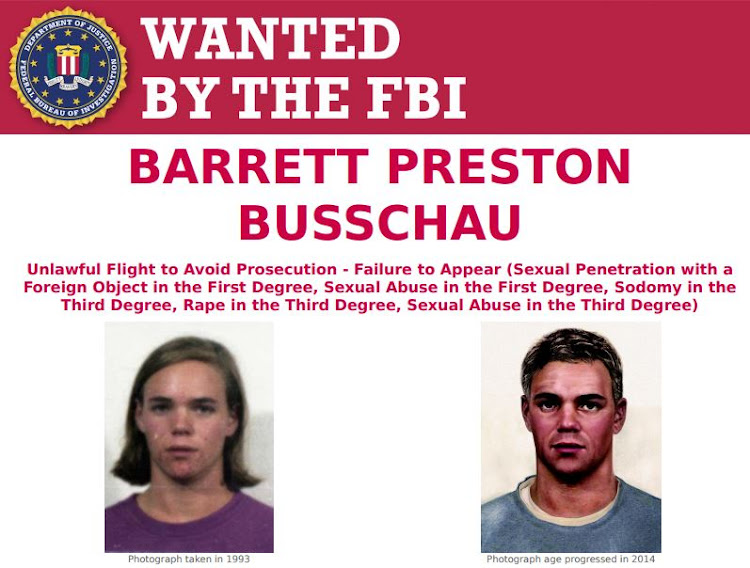 The Federal Bureau of Investigation (FBI) has re-launched a global manhunt for an alleged child molester and rapist it believes may be in South Africa.

According to a post on the FBI’s website‚ it is offering a new reward of up to $10‚000 (R120‚000) and has launched a media campaign in an effort to generate tips in the cold case.

The US law enforcement agency is hunting for Barrett Preston Busschau‚ now 42‚ who disappeared from Oregon in 1993 after he was arrested on multiple charges of sex abuse involving children.

“The FBI is running Facebook ads in both the Portland-metro area and in South Africa‚ where he may be living. In addition‚ the FBI Laboratory has produced an age-progressed photo of what Busschau may look like now‚ and the FBI is profiling Busschau’s case on its fugitive website‚” the post read.

“The reward of up to $10‚000 is for information that leads directly to his arrest.”

According to the FBI‚ a Clackamas County grand jury indicted Busschau for the alleged molestation of five girls aged between 10 and 15 on July 27‚ 1993.

“Busschau was released pending trial‚ but he fled before his next court appearance‚” the post continues.

“In February 1994‚ a Clackamas County grand jury indicted him for failure to appear. That same year‚ the FBI obtained a federal fugitive warrant charging him with Unlawful Flight to Avoid Prosecution.”

According to the FBI‚ Busschau is South African and had been residing in the USA as a permanent resident since 1984.

He is described as having blue eyes and scars on his left ankle‚ left arm and upper right arm.

He also has a tattoo of a green and purple ying-yang symbol on his right ankle.

Investigators believe he may have travelled to California and/or Panama and the last known sighting of him was in South Africa. If you have any information that could lead to the arrest of Busschau‚ you can submit your tip-off here or contact the American Embassy in Pretoria on 012 431 4000.

His wanted poster can be viewed and shared here

Clean up your act or face the music. That’s the stern warning from Johannesburg’s new top cop‚ David Tembe‚ to Johannesburg residents.
News
3 years ago