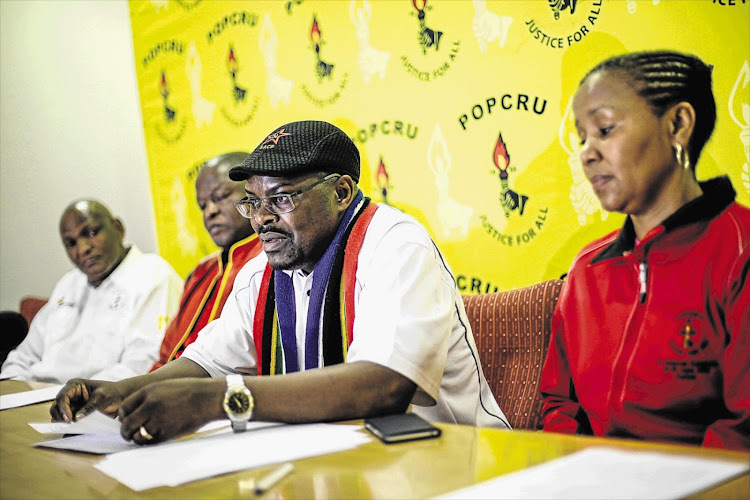 Popcru general secretary Nkosinathi Theledi said the union was angry at not receiving responses from the departments of justice and correctional services and transport concerning its members’ concerns.
Image: KEVIN SUTHERLAND

The Police and Prisons Civil Rights Union (Popcru) on Sunday expressed its displeasure at not receiving responses from the departments of justice and correctional services and transport concerning its members’ concerns.

On July 13‚ the union embarked on a national march and presented a number of memorandums to the justice and correctional services department‚ the police service‚ the health department and the transport department.

They had given all the departments 14 working days to respond to their demands.

One of the demands to the police department was that there should be a single police service.

Popcru noted in its memorandum that the national police commissioner only had control over the national and provincial police service and had no say over municipal policing.

In its memorandum to justice and correctional services minister Michael Masutha‚ Popcru had demanded that there should be employment of adequate personnel in prisons.

In a media briefing on Sunday following its special NEC meeting at the weekend‚ Popcru general secretary Nkosinathi Theledi said following the delivery of memorandums in Pretoria‚ it had only received responses from the police and the health department.

Hawks need to be operationally independent from police: Popcru

The Police and Prisons Civil Rights Union (Popcru) said on Sunday the Hawks should be operationally independent from the police service and should ...
News
3 years ago

The Department of Correctional Services is to be blamed for the stabbing of a prison warder by an inmate who tried to escape from custody at the ...
News
3 years ago

“What stands out is the fact that the South African Police Service acknowledges the issue we have raised. We will be engaging further on the implementation of a single police service‚” Theledi said.

He said in its response‚ the police reflected on‚ among other issues‚ the need for a flatter organisational structure to improve service delivery‚ decentralisation of work and authority to police stations and the availability of specialised skills at police stations.

Theledi called on the union’s members in the correctional services department to refuse to transport inmates from maximum security prisons to courts or hospitals if the ratio of correctional officials was not two to one.

Theledi said there should at all times be two correctional officials escorting one inmate‚ excluding the driver.

“All officials should work strictly in accordance with the defined policies and no amount of intimidation from the management will be tolerated. To this extent we will certainly defend our members‚” Theledi said.

Why Popcru is marching to the Union Buildings

Police and Prisons Civil Rights Union (Popcru) members will march to the Union Buildings in Pretoria on Friday.
News
3 years ago

The Department of Correctional Services (DCS) launched the Mandela Rules last week at Drakenstein Correctional Centre in the Western Cape, where the ...
News
3 years ago