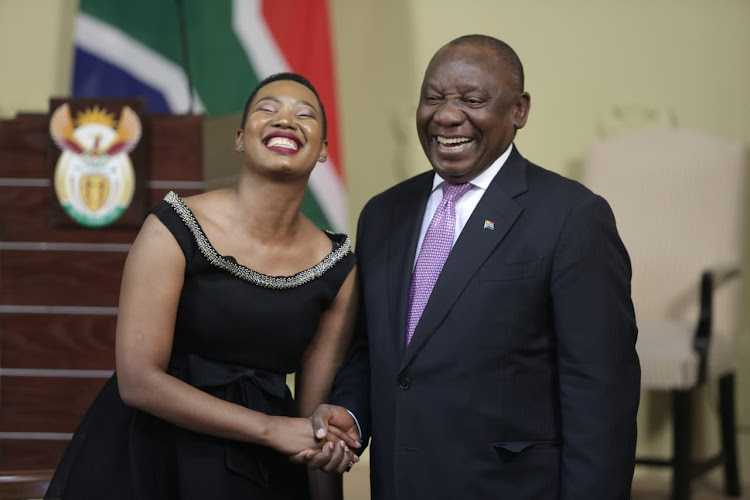 The newly appointed Minister of Communications, Stella Ndabeni-Abrahams received a stamp of approval from the public and opposition parties as she made her debut as the newest face in the cabinet.

South Africa is all too familiar with abrupt cabinet reshuffle announcements. This is the second under the Cyril Ramaphosa administration, which took office in February.

On Thursday, President Ramaphosa announced changes to the cabinet, a move that was anticipated following the resignation of former home affairs minister Malusi Gigaba.

But the star of the reshuffle was former Deputy Minister of Communications Stella Ndabeni-Abrahams, who is the newest face in the cabinet.

Ndabeni-Abrahams received massive support from South Africans on social media, as well as a stamp of approval from members of the DA and the EFF.

President Cyril Ramaphosa has dropped the axe, reducing the size of the executive by merging the departments of telecommunications and postal ...
Politics
3 years ago

Here are four things that got the new minister a stamp of approval:

At just 40 years old, she is the youngest member of the cabinet. The South African ministerial cabinet is known for being occupied by more senior members of society and the issue of adding young faces to the cabinet has been an ongoing public discussion.

2. New job, but a familiar space

3. Educated and fit for the job

During her swearing-in ceremony, Ndabeni-Abrahams wore a stylish number from designer Thula Sindi’s collection. The new minister’s aesthetic, from her outfit to make-up and hair, had South Africans gushing.

Ndabeni-Abrahams' appointment had many on Twitter excited about the newest addition to the ministerial family:

I see the Departments of Communications & Telecommunications have been merged (delayed to ‘19) This is what we’ve been calling for, it made no sense to separate the 2 in the 1st place. Stella Ndabeni-Abrahams has served at both Departments, I expect her to hit the ground running.

New Minister of Communications is Stella Ndabeni Abrahams that's faces we want to see in our parliament Cupcake must reshuffle all grannies.#CabinetReshuffle pic.twitter.com/8H4mZ82NKO

Congratulations Deputy Minister Stella Ndabeni-Abrahams @Stellarated for appointment as Minister of Communications. Your steadfast leadership and grace under fire will take you far. pic.twitter.com/5JS9pC6KfP

Ey,I'm busy drooling over Minister Stella Ndabeni-Abrahams, didn't even notice that the Repo rate has gone up!! Ey,uthando kodwa pic.twitter.com/FXdNAlgyPO

What a funky Minister... I love her already. I'm all for people who work hard and play hard❤ All the best to Stella Ndabeni Abrahams pic.twitter.com/qDG2pPMOiu

Best wishes @Stellarated in your new role as Minister of Communications and Postal Services.