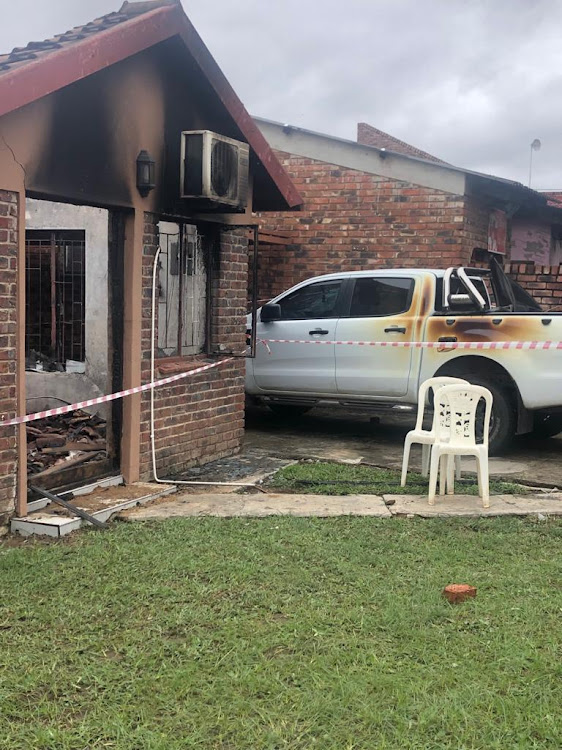 A 51-year-old Limpopo father is believed to have committed suicide by setting alight his home using a 'highly flammable substance', police said on Monday. His two daughters also perished in the flames.
Image: Provided

A 51-year-old Limpopo father is believed to have committed suicide by setting alight his home using a “highly flammable substance”, police said on Monday.

The fire also killed his two children, aged nine and 13, who were found in separate rooms.

“The neighbours allegedly saw the house engulfed in flames and jumped over the wall fence to rescue the occupants. They broke one of the windows to get inside and in the process managed to rescue the father who had already suffered from smoke inhalation. He died on the scene.

“The intense blaze and smoke forced them out. The police and emergency personnel as well as fire fighters were immediately summoned and after the fire was extinguished, the burnt bodies of the two children were found in separate rooms,” said Mojapelo.

Preliminary police investigations revealed that the deceased and his wife were separated and that his daughters were staying with him.

“It is also suspected the father set the house alight using a highly flammable substance,” he said.

The man was identified as Gladwin Mboweni, a Stats SA employee. His daughters were identified as Mikateko Tonia Mboweni and Tsakane Tilda Mboweni.

Police said the motive for the incident was unknown, but did not rule out the possibility of domestic violence.

Provincial police commissioner Lt-Gen Nneke Ledwaba condemned the incident, and urged community members who might be facing domestic challenges or strained relationships to seek professional help instead of resorting to extreme violence.

An experiment by the Fire Engineering Research Unit at Stellenbosch University (FireSUN) has shown how rapidly fires can spread in informal ...
News
1 year ago

Four people, including two children, died in a fire in Newlands West, Durban, on Sunday morning after their house caught alight.
News
1 year ago