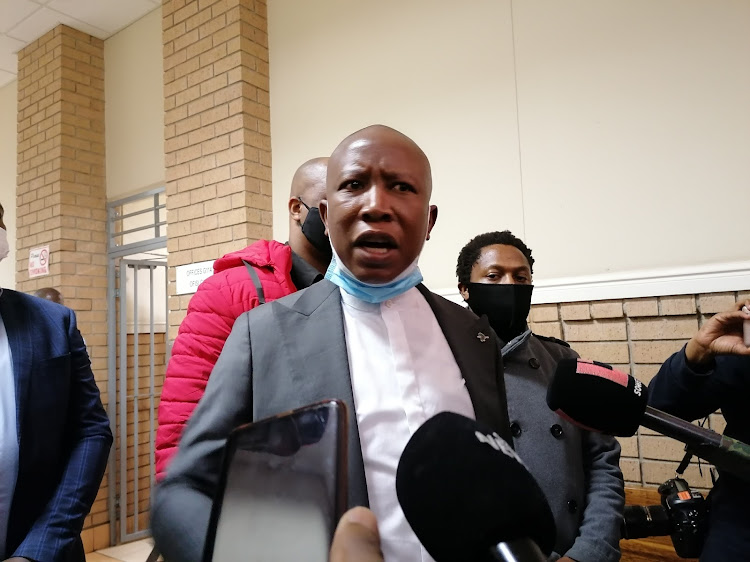 EFF leader Julius Malema said the cop who accused him and MP Mbuyiseni Ndlozi of assault should have been guided by the spirit of ubuntu.

Malema and Ndlozi have been accused of pushing the officer at Winnie Madikizela-Mandela’s funeral.

“Police must be pushed because half the time they enter difficult areas even where people are emotional at times. Some are irrational. They don’t think properly,” Malema said.

He was speaking to his supporters outside the Randburg magistrate’s court where he and Ndlozi each face a charge of common assault.

“When a police officer is pushed in a situation like that they always understand that, as an officer of the law, you will get in difficult situations. You have to be guided by the spirit of ubuntu from time to time and understand that when people are at grave sites they are emotional,” Malema said.

Ndlozi and Malema’s case was postponed to October 28 and 29 for trial.

The two EFF leaders are accused of assaulting a police officer in 2018 at the funeral of struggle stalwart Madikizela-Mandela.

Meanwhile, Malema said the EFF would on Friday go to Senekal, Free State, where a violent protest erupted when two men appeared in court in connection with the murder of 21-year-old farm manager Brendin Horner. It is also where a 52-year-old man was arrested for his role in the protest that led to a torching of a police van. The man was denied bail on Tuesday.

“When you climb on top of a police, when you enter a court through violent means and enter a police station, you must know you have declared war with the state and the state would have to protect itself and the its citizens,” Malema said.

A sea of EFF supporters turned up in support of party leader Julius Malema and Mbuyiseni Ndlozi at the Randburg magistrate's court on October 13 2020. The pair faces assault charges relating to an incident that took place at the funeral of struggle stalwart Winnie Madikizela-Mandela in 2018.

The case against EFF leader Julius Malema and MP Mbuyiseni Ndlozi has been postponed.
News
1 year ago

André Pienaar, the 51-year-old man arrested for his alleged role in a fiery protest in the Free State last week, has been denied bail.
News
1 year ago