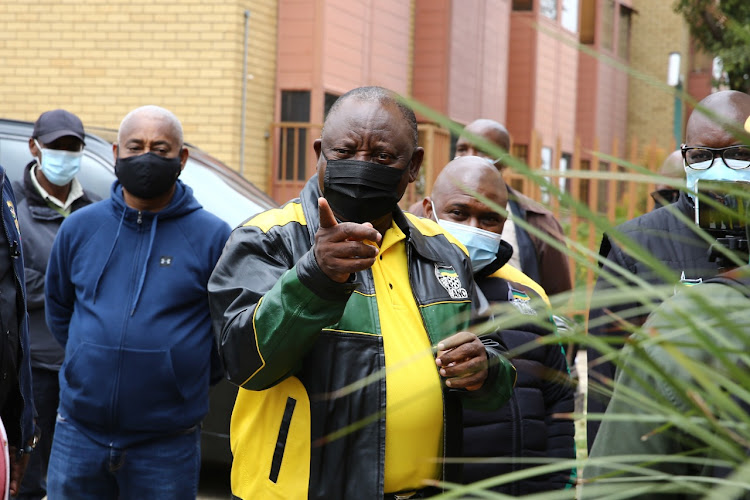 President Cyril Ramaphosa on Saturday said he believes that the upcoming local government election are going to unite and consolidate the ANC and its members.

Addressing the media on the sidelines of the launch of the ANC’s election campaign in Soweto, Ramaphosa said unity was emphasised during the party’s recent national executive (NEC) meeting.

“It was a wonderful NEC, dealing with a number of challenges such as the way (we dealt with) the technical and organisational problems we experienced with the registration of our candidates, and we were all at one in dealing with those problems.”

For Ramaphosa, this was “a breath of great strength that we are emerging from the negativity of the past and are now moving forward united and the election is going to unite us and consolidate us even more”.

Asked why South Africans should continue to vote for a party plagued by factional conflict, alleged corruption and maladministration, Ramaphosa said: “The ANC is a very large organisation and it has a number of members and leaders and we are able to find one another where we have difference and we have been dealing with the challenges like any party goes through.

“I think we have found and we are finding an equilibrium, or being able to forge unity and purpose, and we are going to chisel it into better shape now during the election campaign.

"It is going to enable us, as we move on, to find that it is a lot better to work together in harmony and proper coordination than to be at each other’s throats, because our people want a united ANC.”

ANC president Cyril Ramaphosa and his party were shown the middle finger on Saturday by angry residents of Soweto's Nomzamo township, who said they ...
Politics
11 months ago

Ramaphosa said various surveys had showed that “people are attracted to a much more united ANC than to a divided ANC”.

Speaking about the party’s strained finances, Ramaphosa said: ,“We need to cut our coats in accordance with what we have and we are having to make do with limited resources. That is why we have resorted to our members to reach into their pockets and fund their organisations.”

He said he was a great enthusiast of “members funding their own organisation so that they can take full ownership of the party.”

Responding to the delay on Constitutional Court’s ruling into the reopening of candidate registrations after the ANC missed the deadline to submit candidate lists in over 90 municipalities, Ramaphosa said: “I am very relaxed and I think we have put forward a very good and cogent case on this matter and the legal arguments that we put forward are good and sound.”

The DA and the EFF have applied to have the Electoral Commission’s decision to reopen candidate registration overturned. Ramaphosa said the party would give the Constitutional Court space to issue its judgement.

Congress of the People has slammed the Electoral Commission, charging that it is "owned" by the ruling ANC.
Politics
11 months ago

“We will respect whatever judgement that the Constitutional Court comes up with. They are the apex court in our country,”

Responding to the hostile reception he received earlier when he visited the Nomzamo informal settlement, Chiawelo and Naledi communities in Soweto, Ramaphosa said he told residents he was not in the area to mobilise for the elections.

“My main message had very little to do with registration and voting, it was more about dealing with their problems. I did not even have a pamphlet in my hand to canvass people to go and vote.”

Ramaphosa said told the community that, “we ain’t done yet, we are still going to come back to this community with a full blast campaign”.

When asked about the Afrobarometer survey released this week, which found South Africans believe corruption has increased since he took over, he said: “They have not mentioned the efforts we have made to strengthen corruption-fighting institutions that were almost in tatters, weakened and debilitated.”

Ramaphosa said many South Africans did not know about the Special Investigating Unit, which was now “busy and at work. They are unravelling corruption and dealing with and recovering money. That report does not deal with things like that.”

Our president has no backbone, key institutions have no integrity, and Jacob Zuma wins again

It's getting very tiring, writing - and talking - about Jacob Zuma. When he was finally booted out of office three years ago, the naïve among us ...
Opinion & Analysis
11 months ago

IEC says it will monitor donations received by political parties through crowdfunding.
Politics
11 months ago

The DA’s case against the Electoral Commission ran counter to the express wording of the Constitutional Court in its order last week, the ANC said in ...
Politics
11 months ago

ConCourt should dismiss DA’s case without a hearing: IEC

The Electoral Commission says the DA’s case against it is “untenable in law” and “premature on facts”.
Politics
11 months ago